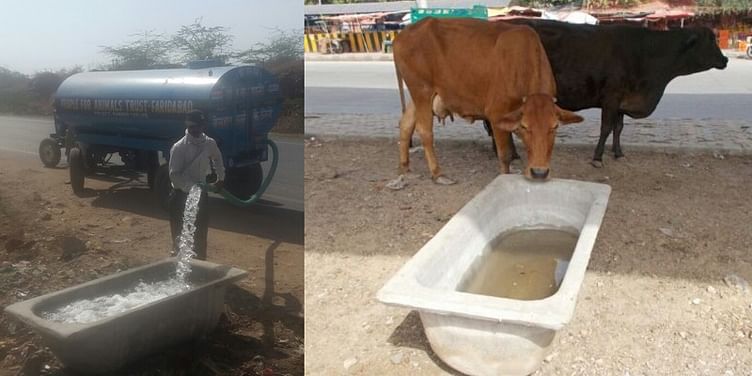 Every living creature on earth has the right to live. As humans, we need to protect animals and safeguards their rights.‘People for Animals Trust (PFA)’ is one such organisation that has been striving towards animal welfare in Faridabad and the surrounding NCR region.

Founded in 2007 by 31-year-old Ravi Dubey, PFA takes care of both wild and domestic animals in Faridabad, Palwal, and surrounding regions, covering almost up to Mathura.

PFA came into being as a commitment towards protection of animals and their rights. The organisation has since campaigned for animal rights, and has spearheaded the movement to respect all life on earth.

The organisation runs a helpline, which aims to bring instant relief to all animals in danger. It has been running two ambulances Faridabad, Palwal, and Hodal to rescue injured wild and domestic animals. Ravi says,

“Injured animals from traffic accidents, homes, and animals that are targets of violence, are often called for rescuing on our helpline.”

The Ballabgarh centre in Faridabad is known as ‘Aastha Shelter Home’.

“The shelter gives treatments to all the animals that are rescued from sites of accidents, in addition to which it also serves as a convalescent home until they rehabilitated are into their natural habitats,” Ravi adds.

One of the major activities of PFA Faridabad is wildlife rescue and rehabilitation.

The organisation has got recognition from Animal Welfare Board of India, Ministry of Environment & Forests (Govt. of India) for its campaigns for animal rights and respect for all life on earth.

One of the major projects that the organisation has conducted and plans to continue it in the coming years is the ‘Summer Lifeline Project’. With the increasing mercury levels and the scarcity of water, the organisation decided to set up cement water tubs in Faridabad and the national capital region, in 2015.

Talking about the project, Ravi says,

As part of the project, the organisation has set 150 cement water tubs, with a capacity of 200 litres, in the national capital region and Faridabad, together. The organisation has hired water tankers to ensure that the tubs have sufficient water for the animals throughout the season.

People of Animals has conducted numerous rescue operations over the years. But one particular incident that Ravi recalls is when one members of the organisation was severely injured in the process of rescuing a kitten stuck on a metro pillar in Faridabad.

Talking about the incident, Ravi says, "Back in 2015, we received a call that a kitten was stuck on one of the metro pillars for about two days and that it was to be rescued. During this rescue operation, one of our men stumbled and fell from about a height of 40 feet." He adds,

"This was one of the turning points of our organisation, when the team faced a grave financial and moral crunch. The poor understanding of many of the importance of animal care and welfare in the country was reflected when we received no support or funds to withstand the crunch."

Though the organisation doesn’t boast of a huge number of volunteers, it managed to bounce back and do commendable job ever since. Currently, the organisation has about 10board members and 15 volunteers to help out with the operations.

Ravi says, “Our members comprise from all walks of society and from all age groups, ranging from college going students to retired people, who want to spend their time usefully and meaningfully for a cause. We urge more volunteers to come forward and help us.”

Apart from taking care of sick and injured animals in our shelter, PFA also organises workshops in schools to increase awareness towards stray animals and encourage ethical treatment of animals. PFA also organizes sterilization programmes for dogs to control their population and give anti-rabies vaccines to street dogs from time to time to control rabies. The organisation has been able to reach out to over 5,000 animals in the last nine years.

People for Animals on Wheels (PAW)

In addition to the two ambulances that PFA already runs, it is also running a mobile ambulance to render better services and care to injured animals. The organisation already has a pilot version in place, but hopes to have a fully functional mobile ambulance on the road soon.

PFA is running a crowdfunding campaign, ‘People for Animals on Wheels’, providing on-the-spot medical and veterinary facility along with shelter home.

The organisation hopes to increase the efficiency and impact of its services by improving the facilities of the mobile ambulance, by having a customised ambulance, equipped with a hydraulic jack and better medicines and food for the animals and the staff.