Carpe diem with Shuchi Muley, one of 107 artists who hand-painted scenes for ‘Loving Vincent’ 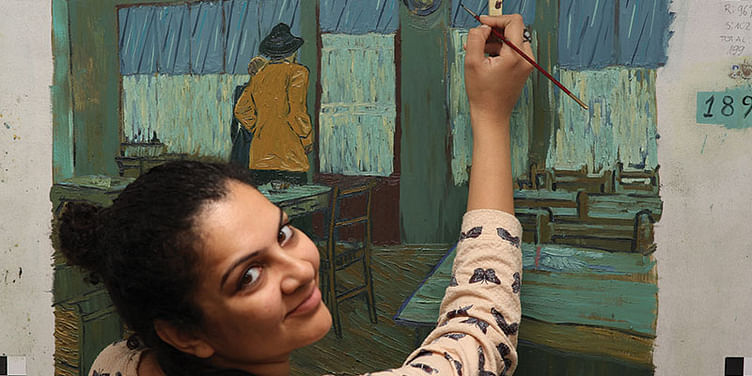 All of 34, representational oil painter Shuchi Muley has already made her mark in international art and cinema — Bengaluru-based Shuchi has just returned to India after working as a painter and animator for the much talked about international movie Loving Vincent. Created by Oscar-winning studios BreakThruFilms and Trademark Films, it is the world’s first fully painted feature film and, as the name suggests, delves into the life and death of Dutch Post-Impressionist painter Vincent Van Gogh. Painted entirely using oil paints on canvas, it seems a fitting tribute. Shuchi is one of the 107 artists who hand-painted scenes for Loving Vincent. She underwent rigorous training in the Polish city of Gdańsk, painting and animating hundreds of scenes from the movie. According to the film's description, about 62,450 frames were done in oil on over 1,000 canvases. Each scene, shot with actors, has several frames which are being painted to give it a dreamy, flip-book feel in the style of the Post-Impressionist painter.

In a previous avatar, Shuchi was a technology professional and art was a hobby, something to engage in on weekends. "I was working with Salesforce, San Francisco, and was keen on a hobby. Since I liked to paint, draw, I was eager to learn formal techniques," she shares.

"I signed up for weekend classes to hone my skills and my interest grew so much that I kept working on it even during weekdays. I had a great teacher who would bring other artists and they would teach different styles along with the Flemish style that I was learning. I attended classes for the next three years and after much thought, decided upon taking up art full-time," elaborates Shuchi.

Call it serendipity, while Shuchi was struggling to take her next step, her husband wanted to quit his job and travel. While he wanted think about his next career move, she wanted to understand whether she was ready to take a plunge into the world of art or if her interest would wither away with time. "We both quit our jobs and travelled around the globe. We stayed at hostels and the art on the walls blew me away. We visited lots of museums and I signed up for art workshops in different places like Paris and San Francisco," she tells.

Shuchi knew it was going to be art and when she saw the trailer of Loving Vincent on Facebook, she sent in her portfolio on impulse. She shares, "As expected, for a long time, no one responded. But I did not lose hope. I knew I wanted to be part of this movie so I constantly tried to find out more about the movie and the people who were connected with it. I tried to figure out who the right person to get in touch with was. I sent my portfolio to multiple people and kept in touch with the progress of the movie till the selection team finally responded," she giggles.

The stringent selection process began with a three-day test in Poland. "For the test, we were given a scene, a small snippet of the movie and we had to paint each frame of that scene, with references from Van Gogh paintings as well as those of other artists. Within those three days, one had to learn how to make the brush strokes while looking at other artists’ works. The selection team evaluated each of the artists on ability and agility, that is, how quickly one could adapt and paint as many frames as possible," she says. "The results were instantaneous and elimination was swift. In the end, 15 of us were selected," Shuchi elaborates. "Post this, we began our 16-day training, which incidentally was also equivalent to a test, as they could still reject an artist before we went on to the production floor. The production team would give us a scene and would ask us to paint and where there was a mistake they would explain. I figured the more one asked, the more they would tell," she shares of her experience.

In the beginning, it was difficult for me as I had done representational and realism styles of paintings. It took me time to adapt to their requirement but they helped me with the techniques. We would be given individual scenes. We had our work tables with a monitor and canvases in front of us and at the back there would be a camera and a projector. For each scene, we would pause on the scene and then paint it as required. The camera would then take a snapshot and feed it to the software and we would go to the next scene, scrap the portions that we would have to redo for the next scene from the artwork,

Shuchi says about her work day in the studio in Poland, which was her home for the next five months. While she was in Poland, Shuchi, along with fellow artists who were part of the movie, put up a group show of their works at a local gallery, which was well received.

"Depending on the difficulty level of the scene, like when the figures on the screen were small, I would end up doing 10 frames a day but for a particularly difficult scene where there were expressions of the actors, I would do about two or three frames." Now that the movie is almost over, looking back, Shuchi feels, "If I was a part of the project as early as other Polish artists, I would definitely be faster. Initially, the production team had only Polish artists for the project and only late last year did they start accepting international artists." She continues

But every day was a new learning, like choosing the right brush, the technique and so on. I learnt a lot from one painting — ‘Wheat field with Crow’ — where I improvised on things like the use of brush strokes and use of paint in a different manner.

Back in India, Shuchi wants to start painting again. She has just finished one painting that she had left incomplete before travelling to Poland. She is also working on creating workshops to teach people and share what she has learnt. On her mind now is to create a body of work with at least 10 more paintings in a series and exhibit her works in Bengaluru and other cities.