'The world is better off collaborating,' says the Dalai Lama 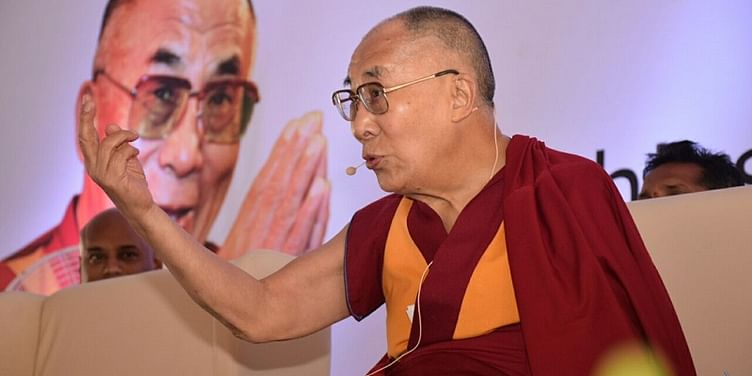 “I am going to be 82 years old in a couple of months. How old do I actually look?” asked the Dalai Lama at the inauguration of the Dalai Lama Center for Ethics and Transformative Values at Hitek Exhibition Centre in Hyderabad today.

The attendees of the inauguration of the South Asian hub of the Massachusetts-based Dalai Lama Center were a mix of government officials, Buddhist monks, and those associated with technology incubation centre T-Hub. The world is moving at breakneck speed towards closing boundaries and doors, but the Dalai Lama made sure to let his audience know that only oneness and smiles can lead to progress.

The collaboration with T-Hub is to ensure that young entrepreneurs join the movement of change and growth. Tenzin Priyadarshi mentioned that along with businesses, it is important that technology takes a shift towards ethics and transformative values.

“Instead of building a wall, America should make Mexico and Mexicans a part of America,” said the Dalai Lama. He went on to add,

“We are a family of seven billion people. The problem starts arising when we start isolating one from the other. It is important that we feel the universal oneness and compassion, which is natural to human beings, towards one another.”

Here are some takeaways from the talk that Indian startups can use:

“I was a very lazy student. I didn’t have the patience to read, but today I read a lot. Whether it is scriptures or journals, I read as much as I can, and one thing that gives me hope and faith in mankind and human beings is the fact that science believes human beings are driven by love and compassion and not anger,” said the Dalai Lama.

In today’s cut-throat world where we are driven by valuations, funding, and downsizing competition, it is time to pause and understand the reason for actually starting up. In the busy schedules of life and chasing funding and valuation, the purpose behind starting up is lost.

At a time when the blue-eyed boys are crying themselves hoarse about a level playing field and capital dumping, this teaching of the Dalai Lama’s is particularly significant. The world, he believes, is better off collaborating. While there might have been a Brexit, the European Union has nevertheless given Europe a lot of trade and development.

In the same vein, it is time that similar startups started collaborating. This thought was echoed at a shared economy panel at Bengaluru’s The Hive, where one of the questions asked was, “Why can’t startups collaborate and make rules easier for themselves and by and large help consumers?”

“My father was very short-tempered but my mother was very compassionate. I think mothers and women have more compassion and power than we even realise,” said the Dalai Lama. He added that if there were more women as leaders, the world would be a different place. The 2015 Global Gender Gap Report is one example of how there truly is a need for more women to turn entrepreneurs.