Facebook turns 13, has it peaked or will it hit a ‘growth spurt’ soon? 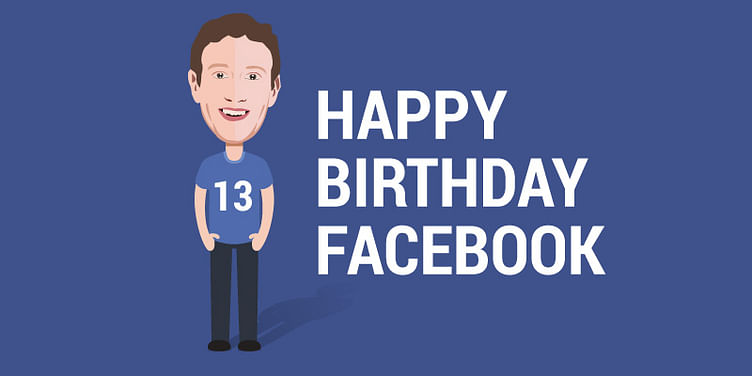 On February 4, 2004, Mark Zuckerberg and Eduardo Saverin launched a website called Facebook. The platform was initially limited to only Harvard students but was then slowly expanded to other universities in the US and other countries like Canada, before launching globally.

Looking to raise external capital to scale up in 2004, Saverin tried to pitch to Jeremy Levine of Bessemer Venture Partners at a corporate retreat. Agitated by the persistent Harvard undergrad, Levine, according to BVP’s anti-portfolio, told Saverin,

Kid, haven't you heard of Friendster? Move on. It's over!

Facebook was finally able to raise a $500K angel round led by Peter Thiel along with Reid Hoffman, Mark Pincus, and Western Technology Investment. It then went on to raise $12.7 million (in May 2005) and $27.5 million (in April 2006) led by Accel and Meritech Partners, respectively, before officially launching the ‘share button’ to let users share videos, photos, and other content anywhere on the web. This was also Facebook’s first official press release. In it Zuckerberg noted,

Fast-forward to 2017, Facebook now has an estimated market cap of $377.42 billion and has gone on to acquire 66 startups, the most notable of which are Instagram, Oculus VR, and WhatsApp for $1 billion, $2 billion, and $16 billion, respectively. Facebook had also gone public on the NASDAQ in May 2012 and reached a market cap of $104 billion after it began selling its stock.

Facebook recently announced its fourth quarter and 2016 results. Its total revenue in the fourth quarter grew 51 percent to $8.8 billion, compared with 52 percent overall revenue growth in the 2015 quarter.

According to a report by MarketWatch, Facebook’s better-than-expected earnings report, fueled largely by mobile ad revenue, could represent a peak for the core social network.

“We continue to expect ad revenue growth rate will come down meaningfully in 2017,” David Wehner, Facebook CFO, told MarketWatch, adding that the company is also going to continue to make big investments in infrastructure and the workforce.

So investors would now be looking for Facebook’s other non-core businesses and acquisitions to ‘buck up’ and generate revenues, if the Menlo Park Headquarters company wishes to see a growth spurt in its ‘teen years’.

Facebook is in a similar boat as its neighbour in Mountain View, Alphabet, which is looking for its non-core businesses and moonshot ideas to generate revenue to take the pressure away from current ‘cash cow’ – Google.

Here is a closer look at Facebook’s investments that could be a key for its future growth.

MarketWatch estimates that Instagram could be a big winner for Facebook. Wehner had noted that while the Facebook app may have reached peak load for ad revenues, there is room for growth on Instagram.

Instagram has also been able to generate good traction from its recent Instagram stories launch, which the company has admitted was inspired by Snap Inc’s feature with a similar name (Snapchat Stories)

The focus is moving slightly away from Facebook’s core app and going to Facebook’s mobile messaging properties WhatsApp and Messenger.

In January 2016, WhatsApp had dropped its annual subscription fee and announced a B2B strategy to get enterprises to leverage WhatsApp. 2016 also saw Facebook Messenger being opened up for enterprises with the launch of Messenger bots and new camera integration.

On being asked about the future plans for these two platforms, MarketWatch noted that Zuckerberg would only say that the monetisation of its other platforms would be different. He said that WhatsApp would provide a more utilitarian experience where transactions could be useful, while Facebook has done some experimenting of ads in the richer environment of Facebook Messenger.

Facebook believes that the future of social networking and interacting with people will heavily hinge on video and virtual reality.

Facebook has been keen on pushing longer videos on to its platform to then show users longer ads. More recently announced its intention of launching a TV app, as it looks to get into the original content creation space.

Zuckerberg recently announced that Google and Xiaomi veteran, Hugo Barra would be joining Oculus as VP of VR. Generating ad revenue in virtual reality environments could be the next frontier for Facebook to explore, but so far the focus has been more on the recent lawsuit. Oculus was recently asked to pay $500 million to game maker ZeniMax regarding intellectual property theft. According to CNBC, Sheryl Sandberg though was disappointed in certain elements of the decision and was hence considering their options to appeal.

Given these hurdles and the complexity involved in VR, Oculus may not contribute to Facebook’s bottom line in the near future.

In a recent post on Facebook, Zuckerberg took stock of Facebook’s current position and gave a glimpse of its future plans. He said,

Our community now has almost 1.9 billion people, including 1.2 billion people active every day. More than 65 million small businesses use Facebook to connect with their customers. Our biggest focus continues to be putting video first across our family of apps. More than 150 million people now use Instagram Stories every day. We've launched our new camera in Messenger and have started rolling it out in Facebook as well.

Zuckerberg also outlined a 10-year plan and noted that the goal is to ship five million VR units and connect over 50 million people through its Internet.org initiative.