Facebook closes in on LinkedIn, now lets you apply for jobs 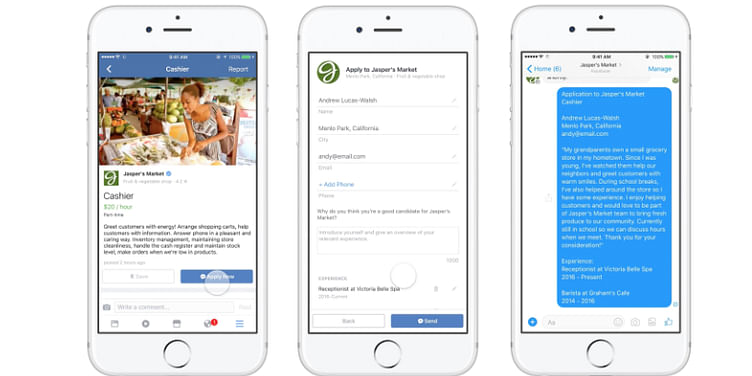 In a blatant bid to tap into LinkedIn's target audience, Facebook will today be rolling out a brand new feature allowing employers to post listings on their companies' Facebook pages and letting job seekers use an 'apply now' button without even leaving the platform. The feature will be activated for US and Canadian business pages.

In an interview with TechCrunch, Facebook’s VP of Ads and Business Platform Andrew “Boz” Bosworth says they wanted to see “how (they) can make Facebook more useful in your everyday life." Some digging brought forth the fact that small businesses face an eternal talent and hiring crunch, as most job seekers are open to a better, higher-paying job even if they’re satisfied with their current place of work.

Thus, Facebook's new feature will let business pages post job listings the same way one posts a status update — from the same bar — and users can not only share, like, and comment but also hit 'apply now', which will lead them to an application form that gets submitted through Facebook Messenger.

A company's page will now also show a 'Jobs' tab, where all the openings they have synced with Facebook will appear in one consolidated list. While the audience that typically does the rounds of LinkedIn is the group that is actively searching for jobs, the users that frequent Facebook do so for a host of other social reasons, and would be tapped into even if they aren't searching for jobs at that moment.

Andrew states that their research has shown “overwhelming enthusiasm” for this rollout. The fact that companies would get direct access to one's social activity could be daunting, but Boz says they cannot be too bothered by it owing to the fact that only "high-skilled workers applying for competitive jobs at elite companies," would be apprehensive, but “casual job seekers … they’re just looking for every opportunity they can get.”

These posts could also be boosted or sponsored by companies, thus allowing them to cast a wider net and allowing Facebook to monetise this offering. And eventually, Facebook will work on improving its targeting in order to match the listings with people with relevant credentials and experience, which may lead to users being more serious about updating their basic information with respect to the institutions and companies they have been part of.