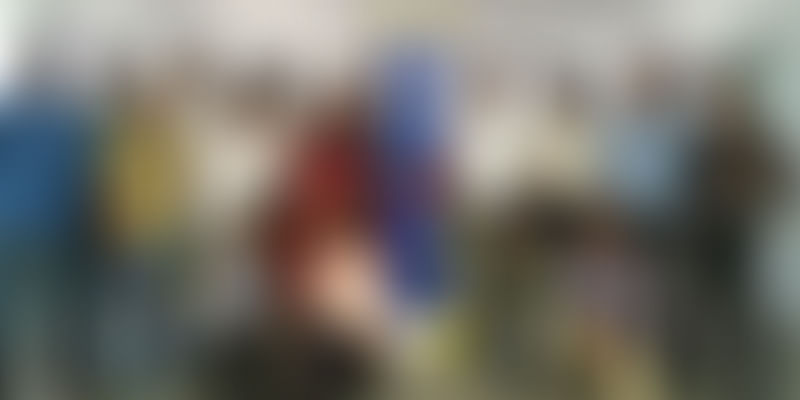 Have you wondered why something said by a person makes such a deep impact on our minds? It's got to do with the way our brains are wired: they 'find' what they inherently want or like and make it their own. In other words, we internalise what we like as a person. Rajesh Manpat's story is also something like this.

When 32-year-old Rajesh heard Infosys founder Narayana Murthy say, “No earth shattering idea has been born out of India for the last 60 years,” it made a great impact on his mind. That's because deep down he was an innovator and in Murthy's words he found a challenge as well as inspiration. Rajesh had always been passionate about technological innovation. Having been in the automation industry since 2009, Rajesh had developed several inspection automation solutions. But as a subliminal response to Murthy's words, he went ahead and built Ark Robot.

Rajesh also gives a part of the credit for Ark Robot to KIVA Systems (now Amazon Robotics), the pioneers of mobile robots for warehouse automation. Before getting ready to execute the Ark Robot project, Rajesh visited one of the largest warehouses in India to gauge the problems they faced. He spent the next few days designing and refining the concept for Ark Robot. But before building Ark Robot, he launched iFuture Robotics in June 2016 as its maker.

The ‘Ark’ in Ark Robot stands for ‘Autonomous Robot for Known environment’. It is a mobile robot that can navigate autonomously to any location in a known workspace. The arms and grippers of the robot can be used to store and retrieve inventory. A server communicates between many robots in a single environment and sends each robot a task. The server talks to customer websites and routes work to independent robots in real-time.

Earlier, manpower had to run miles all around the warehouse to find goods and carefully bring them to the exit point. Another thing to be considered is that manpower efficiency is not consistent, and varies throughout the day due to fatigue. Human personnel also need constant monitoring and training and require the supply of lights and air-conditioning.

Rajesh, who did a bachelor's in Computer Science from PES University (Bengaluru) and an MBA from Karnataka State Open University, says,

"Our robots assist manpower by bringing the required goods to the pick stations. Now, a worker in the warehouse is required to sit at one place, with the goods coming to him efficiently and accurately. Just like in any other industry, there are definite advantages in automation here - machines can be faster and durable, and see better ROI when compared to manual operations.”

In 2013, Rajesh invented Elite Scorer, an electronic target system for rifle shooting sport and the defence market. It is used to score targets in real-time and provide a digital display of shot locations. According to Rajesh, Elite Scorer was a success, having sold in 26 countries, and is a patented product.

There were many opportunities I came across, such as in the defence, medical or dental fields. But I decided to work on robotics as it is a subject that I feel very passionate about. I had twice attempted to get into robotics since 2010, but lacked the financial resources to venture into it at the time.”

Before stumbling into the world of entrepreneurship, Rajesh was a national level rifle shooting champion and won many medals. He was part of the national squad in 2007 before he decided to start up with iFuture Systems in 2008, with a seed capital of Rs 5,000. iFuture Systems, under which he built Elite Scorer, was Rajesh’s first venture.

Rajesh now boasts of having nine years of experience in building machine vision systems, automation machines and control systems. He claims to have 10 India and US patents applications in various fields.

Since Ark Robot won the Qualcomm Design in India challenge, resulting in Qualcomm becoming their investor, they gained access to technical, strategy and intellectual property advice from the telecommunications equipment giant. Prior to leveraging Qualcomm as a technology partner, Ark Robot solely relied on shelf embedded hardware. Qualcomm Innovation Lab has also given Ark Robot access to Qualcomm products that are built for IoT applications. Ark Robot is being deployed by a few leading e-commerce companies as a part of a pilot study, according to Rajesh.

Ark Robot also offers a parcel sorting system as a separate product to logistics companies, and the product is gaining significant traction as well. Bengaluru-based Ark Robot currently has a team of 30 members, and the number will likely go up to 40 by the end of February. The startup, at present, is focusing on the domestic market, with plans to go global in the next two years.

Where is the robotics market heading?

The industrial robotics market globally is expected to reach $ 79.58 billion by 2022, according to a report by Markets and Markets. Among the key drivers of this growth are factors like demand for collaborative industrial robots from small and medium-scale enterprises in China, Japan, South Korea and India, and the increasing investments in countries such as India to fuel the manufacturing sector as a part of the Make in India initiative.

Among the hardware startups that are striving to make a mark in the robotics industry is Bengaluru-based space startup Team Indus, which is planning to launch a mission on December 28 this year through ISRO’s PSLV rocket. Gurgaon-based Grey Orange designs and builds products to help e-commerce, logistics and manufacturing companies improve productivity and automate processes in their warehouse operations. i2u2, another prominent player in the space, enables users to be virtually present at the location where the robot is, thereby allowing people to interact, monitor, or move around with family, friends, and colleagues. It can be controlled remotely through a mobile, tablet, or PC via an app connected to the internet.