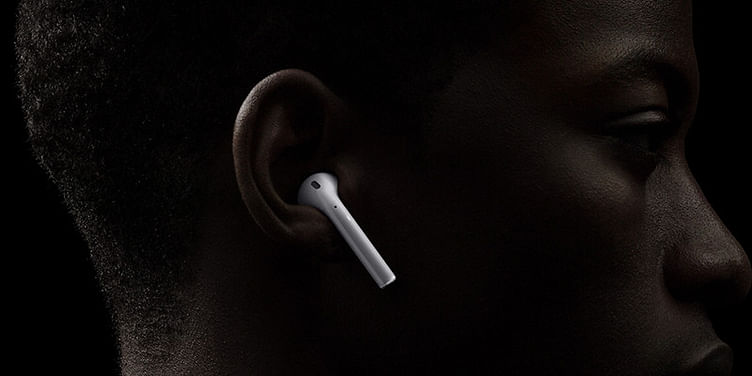 For almost half of last year, the tech media was obsessed with Apple's plan to do away with the 3.5mm headphone jack and use completely wireless earphones instead. By completely wireless, I mean the ear buds aren't even connected with a cable. Articles all over the place and posts on social media went ballistic trolling Apple and taking up every opportunity to poke a bit of fun at both the jack and the 'AirPods' as the earbuds were to be called. This continued till they were launched. But once people tried the AirPods for a while, the jokes evaporated. The thing is, they're Apple all over.

The AirPods themselves were immediately likened to toothbrushes and any number of other items. They do look a bit strange with that extension sticking out of them and are certainly not the prettiest gadgets you'll find around. The case they go into looks, as everyone immediately said, like a dental floss dispenser or a pill box. But for all that, you can see the signature Apple design in the glossy white material, the attention to detail, and the way the pods click magnetically into place in the case, the lid of which also snaps shut with a magnetic click. After the laughter dies down, though, you see that it's a functional design despite being minimalistic.

The impressive thing about these is, of course, that they're completely wireless. No cable connects the two ear buds and they talk to the iPhone using Apple's own WI Bluetooth chip. As of now, there are only a few earphones based on a similar concept but this is going to become the norm soon enough.

Try not to lose them

A lot has been said about how losable the entire assembly is. Surprisingly, the pods don't fall out of your ears. I was able to keep them in through workouts including head-rolls. They're not waterproof so it isn't a good idea to walk into the washroom with them unless you're very careful. Careful is, in fact, what you'll always have to be because this is an expensive gadget and it won't feel at all good dropping them off somewhere. In that sense, it's probably a good idea that they're white and easily visible. If you get up from a chair somewhere, you'll notice that white case more readily. Interestingly, should one of the pods fall out, the music or sound stops instantly, giving you a cue to look for it before you walk any further. When you put the pod back in, the music restarts.

The case also happens to be a charger and battery backup for the pods. When they're in, the case tops up the battery. When the case itself runs out of juice, you plug it in, Lightning style, to charge. You get five to six hours of battery life for the pods, but you can put them into the case for a boost.

The case also does the job of helping to pair the pods with your iPhone. This is something Apple is and should be proud of because it simplifies the process. Open the lid of the case and you'll see a control centre pop up on the phone. Tap and pair.

The AirPods do work with Android phones and tablets but with limited functionality. You pair using the usual Bluetooth method. I felt some of the things I listened to on the Pixel with the AirPods weren't in as full a volume as when using an Apple device. Well, fair enough.

The AirPods were criticised for degrading the quality of the music you would hear. But that wasn't so at all. Barring audio experts and audiophiles, anyone else would probably be as happy with these earphones as with any good quality ones. They give you good, clean, balanced sound with no shortage of detail. No characteristic is emphasised more than the other. On calls too, the sound was clear at both ends.

The advantage of using the AirPods with an iPhone is that you can use Siri. Just tap an ear pod twice and this will activate the assistant whom you can then ask to do all sorts of things including call someone, change to the next track, play music, ask for information, etc. This is really quite useful. You’ll also find the AirPods have connected to your Apple Watch if you have one and you can use it to control music if you want to.

The AirPods make a nice addition to anyone who owns an iPhone and more so if there's an ecosystem of Apple products. They cost Rs15,400 which may sound expensive but isn't really when you consider that these earphones are entirely wireless, have an innovative charging case, and long battery life and really sound good.