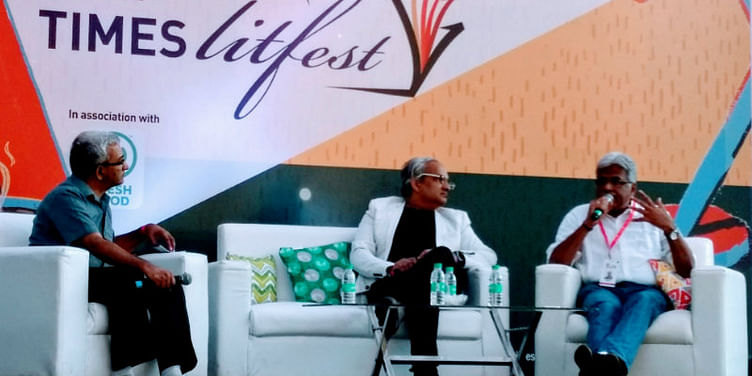 Once the cynosure of the Indian startup ecosystem, Flipkart, Snapdeal, and Ola are today battling to survive the onslaught from their global rivals that are using their deep pockets to snatch market share from the home-grown unicorns. So much so that Sachin Bansal, Co-founder, Flipkart, and Bhavish Aggarwal, Co-founder and CEO, Ola, have cried foul over "capital dumping" by Uber and Amazon, and sought the government's intervention to ensure some kind of a level playing field.

Concerns over the growing competition from the global biggies found an echo at the ongoing Times LitFest 2017 (February 11–12) in Bengaluru. In a panel discussion titled, 'Internet Commerce: Surviving the Global Giants', Mahesh Murthy, Managing Partner, Seedfund, and Hari Menon, co-founder of online grocery platform BigBasket, battled it out on this issue.

When asked what would happen to BigBasket with Amazon’s impending entry into the grocery business, Hari replied,

We will certainly survive Amazon. I believe that Amazon should come in and accelerate its move in the grocery space because 70 percent of India’s retail is grocery. The size of the retail industry is about $700 billion and $400–500 billion is groceries. It is difficult for one player to service the entire market. People will migrate online and buy grocery much faster. Now, Flipkart is also moving into the grocery space.”

Mahesh had a radically different view of the situation. He said that Indian entrepreneurs copy foreign business models with the hope of later being acquired by those very companies. In a pointed reference to Sachin Bansal and Binny Bansal, who worked with Amazon before starting Flipkart in 2007, he said, “The name of the company is Flipkart so it has to flip.”

Mahesh even questioned the viability of the business models of Indian e-commerce companies. According to him, promoters didn't really care about their businesses and were more interested in taking salaries of Rs 30-40 crore. “Though Flipkart and Ola claim to innovate in the Indian market, they take eight times the salary of their US counterparts,” Mahesh said.

That said, he did have nice things to say about companies like BookMyShow, redBus, and Chumbak which, according to him, have no American equivalent and therefore are doing well in the Indian market.

'Innovation has to be relevant'

“WhatsApp raised $10 million and grew all the way to a billion users and got sold for $20 billion with 55 people. For example, Red Bull did not raise money, Tesla did not raise too much outside money, Starbucks did not raise much money,” said Mahesh.

Hari, being the founder of an Indian e-commerce company, justified the entry of similar companies into one space by saying that one single player cannot address a reasonably large market. He even expressed concern over the unavailability of funding for a few players that would otherwise have been effective in capturing the grocery market.

Funding should be infused in remark-worthy products

“Google was not the first search engine, Amazon was not the first e-commerce player but they innovated and captured the imagination. Finally, it is not the VCs but the customers who made them number one. They dethroned the earlier incumbents and after that, they got funded,” said Mahesh.

Twenty years ago, remembering five to seven companies in a single domain was an easy task. Now, however, you can only think of a couple because the remaining have to be truly unique to stand out. “Google, Gmail, Facebook know the game, they do not do copy paste, we do copy paste,” he added.

“By the way, unicorns are nice because they do not exist and these companies are also going out of existence. VCs should only put money in remark-worthy products. The next generation of entrepreneurs should learn that we don’t need fund to build a business.”

Mahesh cited the good examples of Airtel (being the world’s fifth largest telco), Hero MotoCorp (the largest two-wheeler manufacturer in the world), and Bajaj as well. They never cried for external funds.

Hari here countered Mahesh and said that significant investments are required to convey your innovations to the customers.

“The problem with e-commerce is that it has to spend a lot of money on advertising to announce that they are earning less money. How can a business sustain in that way?” asked Mahesh. However, he wholeheartedly supported digital payments company Paytm and lauded the vision of Vijay Shekhar Sharma, whose core focus is not e-commerce but digital payments and the payments bank. Paytm is not a copy-paste model, though there are overseas equivalents like Alipay or Google, he said. "How many Indian chaiwallahs or paan wallas in India have Alipay and Google? If you build a remark-worthy product, people will only talk about you," he stated.