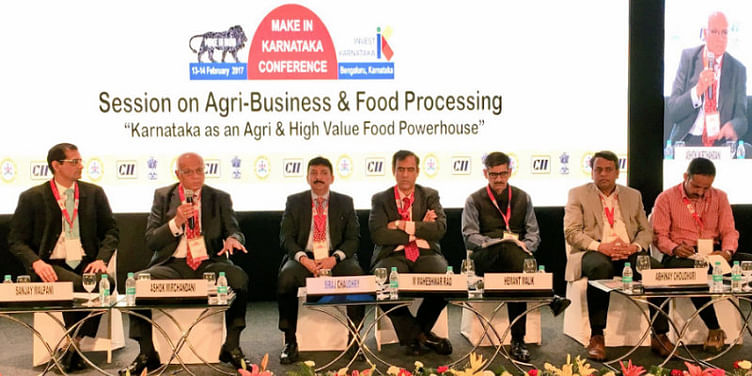 With agro-based industries spread across all 30 districts, it wouldn't be unfair to say that agriculture is a thriving business in Karnataka. A total of Rs 4,428 crore has been invested in 54,905 processing units in the State, and export of agriculture and processed food grew at a CAGR of 11.8 percent between 2010-11 and 2014-15.

“The economic scenario from the International Monetary Fund perspective for agriculture is that it will pick up but there are uncertainties about policies. In terms of foodgrains, there is expectation of an increase by 4 percent in the large crop credits of corn, wheat and rice. Sugar production is also expected to increase by 3 percent and oil seeds by 6 percent. But what is important to look at is the demand perspective in the global packaged food industry, and in certain sectors like dairy, confectionery, baking, sausages the growth is quite good,” said Hemant Malik, Divisional Chief Executive, Food Division, ITC Ltd.

The export value of agriculture and processed food from Karnataka increased from Rs 982 crore in 2010-11 to Rs 1,534 in 2014-15. ITC, Nestle, Britannia, Parle, Nisan, Pepsico and MTR are some of the few big players in this sector. Said Hemant,

"If you look from the outlook or demand side, you could have seen in terms of growing population, income, and another important aspect is the bio-fuel demand. As far as the oil prices are concerned, the demand for bio-fuel goes up, which impacts commodity prices.”

He then turned his focus on the 15-16 global packaged food players who constitute only 15 percent of the market, as opposed to the big players in other sectors who account for 60-70 percent. He noted this presents a great opportunity for local players to make a difference.

The food processing industry has a multi-dimensional impact on the economy, like reducing massive agri-produce wastage, encouraging sustainable agriculture, enabling value creation to the manufacturer of packaged food, generating employment opportunities, driving investment and managing supply side and food inflation.

The agri and food sector will continue to grow because consumers now have more disposable income, but also the growing concern over health issues demands creation of innovative solutions in the food space, thereby creating a huge opportunity for the existing players in this sector.