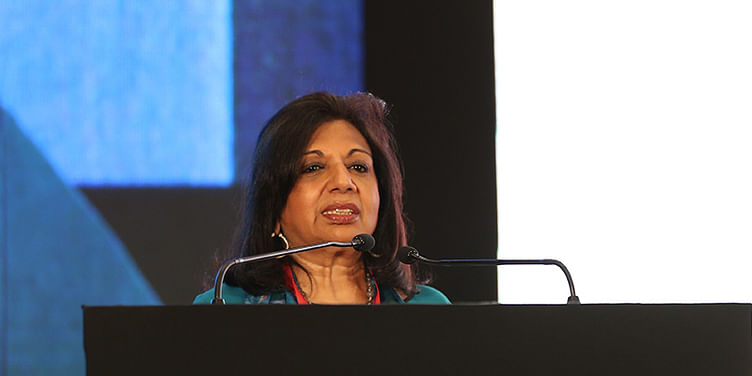 Bengaluru has, today, become synonymous with entrepreneurship. The talent pool in the city is ever on the look out to leverage the potential of IT to make a dent in all sorts of industries and sectors. For example, in the biotech industry, nearly 50 startups, still in their infancy, have turned profitable and attracting next level of funding from venture capital firms.

And no one knows this better than Kiran Mazumdar-Shaw, CMD, Biocon Limited. “The talent pool in the city has created a perfect storm which has created a huge biotech ecosystem in Bengaluru and Karnataka,” she said at the Make in India - Karnataka Conference in Bengaluru on Monday.

Though there has been an upsurge in adoption of IT in the pharmaceutical and biotechnology space, a lot of them have yet to fully leverage the potential of IT in their businesses. Biotechnology generates a large amount of data that needs to be analysed using intelligent software. Said Shaw,

"We also need to use biotech informatics now in various medicines, and we need a robust IT backbone. We need very intelligent software, Artificial Intelligence to be embedded in a lot of research that we do, because it is often found that a lot of research gets repeated only because we don’t capture the data. There is a huge opportunity for IT services and bioinformatics and various other aspects of Big Data analytics and algorithms which Bengaluru now needs to focus on."

She lauded India’s demonstration of engineering and scientific skills. Bengaluru, and Karnataka as a state, have proven conducive for establishing large manufacturing entities that can be compliant with the most stringent regulatory standards.

“Many companies in Bengaluru have invested in formulation, API facilities and creating facilities for injectable and biologics, and the opportunity to invest in both manufacturing and innovation-led manufacturing is also huge,” said Shaw.

Medtech is becoming large in India and provides a significant opportunity for investment. These companies now need massive visibility and that is what the state government is trying to do. Shaw

On on the most powerful women in India business, Shaw said these companies needed to be promoted in a way that would attract big investments in the healthcare sector. With a rich ecosystem of research in both academics and industry, the government plays a supportive role in developing a strategy that attracts maximum investment. She said,

"Karnataka is ranked number one in IT and biotech. Medtech is one sector where the state government is actually taking a leadership role. India has an enormous potential to have a great impact on global healthcare due to the benefits from products and human resources."

India has a 2 percent share in the global biotechnology industry and is one of the top 12 biotech destinations in the world. The sector comprises about 800 companies and generated a cumulative revenue of Rs 74,920 crore in 2016. With biotechnology estimated to become a Rs 6.8 lakh crore industry by 2025, the government is planning to invest Rs 34,000 crore to develop human capital, infrastructure and research initiatives in this sector, according to the Make in Karnataka report.

According to the Department of Industrial Promotion and Policy (DIPP), the pharmaceutical sector ranks sixth among sectors that attract FDI inflows. Karnataka was the first state to have a dedicated biotech policy since 2001, which resulted in the setting up of biotechnology institutions such as the Institute of Bioinformatics and Applied Biotechnology (IBAB), the Institute of Agri-Biotechnology, Bharwad and Bangalore Helix-Biotech Park in Electronic City.