No love story greater than this man and his Nokia 3310: he's been using it for 17 years! 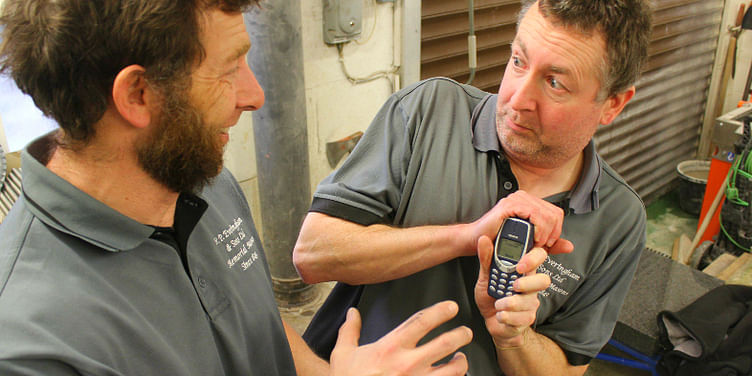 The Nokia 3310's impregnable body has been the butt of many a joke over the years, and one fondly looks back at the good old days and how liberating it was, to not handle phones like an infant – which is hardly what you can say about smartphones today. But don't go about writing your fond eulogies for this wonder just yet, for it is yet to bid farewell to the market. A British man, Dave Mitchell, refuses to let go – and is living his happily with the Nokia 3310 for 17 years and counting!

Often every 90s kid's first phone, the Nokia 3310 never quite managed to be a keeper for anyone, and was always a sort of drill before the kid gets handed their "real" phone. But Dave here has a true to life Romeo and Juliet tale with this vintage marvel – to the extent that he even took his Juliet along with him to war to Iraq, Afghanistan, Jordan, and Germany, while he served in the army for a decade. The 49-year-old resident of Hull, East Yorkshire, who works at a WP Everingham memorial masons there, says that they are going strong, and that his Nokia 3310 is the oldest working mobile phone in the country. According to him, his Nokia 3310, bought in the year 2000, still works perfectly well in the year 2017.

Dave told Metro.co.uk that the phone, which was kept away for a long time, was called upon once again when his daughter moved away for college, thus putting him "under pressure to have a mobile handy so (they) could keep in touch in case of emergencies." "It is really for peace of mind," he says.

"I was given a newer phone with internet access by my son a few years ago but I just didn’t want it – my needs are very basic and the phone has a calculator and games like Snake 2 if I’m bored," he was reported saying.

The phone may not do much else apart from making and receiving calls and texts, and treating its owner to a good old game of Snake, but it dispenses off those duties impeccably. And Dave doesn't need much else out of his phone anyway, for he actually enjoys sitting down in front of his computer for his periodic internet fix." I think there is a real sense of freedom in doing that," he said, to the UK-based portal. He says he doesn't need his phone to have a camera because he owns one anyway, and he wasn't that big on selfies to begin with.

Of course, he has been made the butt of jokes just as much as his dear phone, as he gets ragged for "living like a dinosaur," but Dave says that the hassle free experience his phone has granted him makes it all worth it. ‘A lot of people laugh at me but when push comes to shove their phones break much more easily,’ he said, adding, "I try not to look too smug when I see someone with a cracked screen."

Dave shares that he has dropped the phone several times; in sauces, occasionally and once in the washing machine. But, the phone stayed true to its legacy and the myriad memes about it on the internet - and revived itself after a quick drill of cleaning and drying. No wonder Dave equates his Nokia 3310 to kryptonite. A story on him on Yahoo also reveals how he only charges his phone once every couple of weeks.

At this point in time, the Nokia 3310 is no longer on the market. While phones packed with features that can put computers to shame have been flooding the market, they all falter in the fundamentals. None survive drop tests and have the durability in their software quite like the Nokia 3310.