Meet Paul Siromoni, the man who earned a PhD at the age of 90 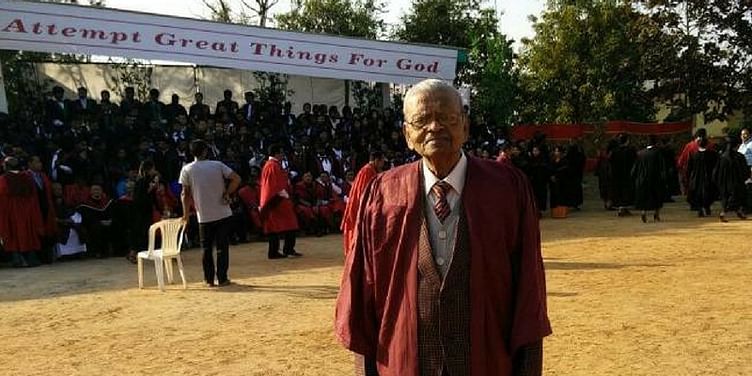 Paul S Siromoni, a 90-year-old from Chennai, has earned a PhD, showing that you are never too old to learn and excel. Beginning work soon after retirement, his thesis took three years to complete, and he was awarded the doctorate in February 2017. According to a report by India Today, his topic of research was 'God's call to the church to join in transforming the world into a kingdom of love.'

Paul worked as the General Secretary of the YMCA and then joined the St Mark's Cathedral as the Head of the Industrial Team Service. He had gone through the process of sitting for six papers, three lengthy exams, and plenty of seminars acquire the doctorate.

Having closely studied the psychological trends among the youth and made out that plenty of them are suffering from stress and depression, Paul decided to start Indian Society for Applied Behavioural Science (ISABS) in order to spread knowledge and awareness on discipline and the ability to work together in harmony.

ISABS is a value-based institution dedicated to the dignity and autonomy of human beings as individuals in groups, organisations, and society at large. ISABS is dedicated to understanding, developing, and applying human process competencies through continuous experimentation, research, and learning related to applied behavioural science.

Paul, being the selfless humanitarian that he is, spent a significant amount of time in the slums of Bengaluru with the intention to teach the kids there about basic necessities like education and health. He collaborated with an NGO and came up with an initiative named 'Joy of Giving Week', where he went to spend a night at Light House railway station along with 50 millenials ranging from students to business professionals which consequently pushed him forward to go for a PhD.

His wife, Joyce Siromoni, who is 87 years old now, is also a humanitarian, who is always up for helping people in need. Starting her work when she was 34, she has been phenomenal in her attempts to get people to rehabilitation and save them from various mental illnesses. An MBBS graduate who has a licence in gynaecology, she has worked in a lot of hospitals across India and the United Kingdom. Paripurnata (Halfway Home), a rehabilitation centre she runs in Kolkata, has been home to plenty of patients. She even won the CNN-IBN Real Heroes award in 2010.

According to an interview with India Today, Paul says,

This iconic couple strongly believes that half of the population is suffering from one or the other mental illnesses just because the world is inhuman. The strong grip they have on their purpose and commitment in their attempts at making the world arrive at love and peace is truly remarkable.