UTV Motion Pictures is not new to us. It was founded by entrepreneur and philanthropist Ronnie Screwvala, one of the biggest names in Indian media and entertainment. UTV Group had produced one of the first television serials in India, Shanti.

His book, Dream With Your Eyes Open, has a plethora of experiences and lessons for every businessman and budding entrepreneur. The book charts out Ronnie’s successes and failures through his thoughts and anecdotes. Here are 15 inspirational quotes from the man himself!

Sharika S Nair
A passionate sportswoman and published author, I get easily intrigued by creativity and marketing. Am a self- proclaimed humorist who is happiest while writing,sketching,communicating or training for a marathon.… 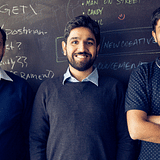