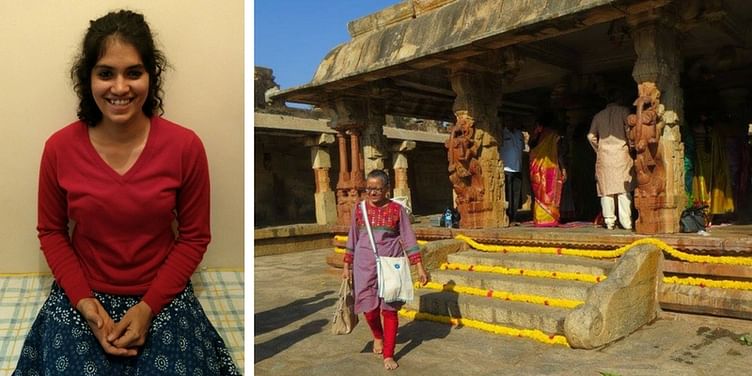 Shyamala Suresh is helping her friends and colleagues tie the knot in an eco-friendly manner.

The big fat Indian wedding is an overwhelming affair, with the glitziest of decorations and the fanciest of food. But what isn’t as well documented is the wastage and environmental damage that go hand in hand with the celebrations. Apart from all the leftover food, piles of dirty plastic spoons and plates, Styrofoam cups, and disposable glasses make their way over to landfills already bursting at the seams.

In this sorry state of affairs, it’s refreshing to see someone who is not only showing people a different way of celebrating their special days but going down the path herself.

“In 2012, I spent my summer vacation with my friends Dr Meenakshi Bharath and Vani Murthy, understanding waste and how it is affecting our environment. We started spreading awareness on source segregation and composting and had made it a part of our lives,” says Shyamala. Subsequently, they took it one step at a time and switched from single-use disposables such as plastic/paper/Styrofoam cups, plates, and spoons to reusables. Shyamala says,

“We started carrying with us steel cutlery when we went out to eat and hosted our own parties/functions which were zero waste. So when it was time for one of our group members to tie the knot, it was the most natural thing for us to have a wedding where no waste would go to the landfill.”

After that first experience, Shyamala has helped six couples along the zero-waste path to a happily married life.

“We are a team of people who work on waste management who all pitched in to make it happen. The credit of the individual weddings goes to the couple and their families who took this through,” says Shyamala.

The first step towards going eco-friendly is to do away with things that are either disposed of after one use or things that aren’t biodegradable. These green weddings do just that.

Shyamala and her friends suggested that printed invitations be reserved solely for the elderly, with the younger generation being invited via the digital medium they use for everything anyway. The decorations were free from shiny plastic and instead used only things that could be reused or composted. The flowers that were used were local or seasonal flowers since they could be easily strung together and did not require to be pinned up on Styrofoam. Shyamala says,

“An effort was made to try and source flowers from a farmer growing it naturally given that the huge amounts of pesticides used in floriculture is poisoning the land. We also try to keep flowers minimal and tasteful as well. The name of the bride and groom at the entrance is also in material that can either be composted or reused.”

The serving tables are covered with tablecloths, and all the cutlery — whether steel, glass, or melamine — is reusable. Filtered water is served instead of bottled water.

It takes two to tango, and the same goes for a wedding to be eco-friendly. While the bride and groom take all these measures, it is important for the guests also to comply, which means, among other things, absolutely no bouquets, since they serve no purpose and are nothing more than waste.

Cloth bags and paper bags made out of newspapers are used for return gifts.

“There will be leftover food, waste food, banana leaves, and flowers at the end. The leftover food can be donated, food waste can be sent to a piggery or a composting unit, banana leaves can either be fed to cows or composted, and flowers can be composted or put in a biogas plant.There may be some plastic, like the packets in which groceries are bought, and these are kept aside and sent for recycling,” says Shyamala.

Shyamala says that an average wedding with 1,000 people attending will have two truckloads of garbage going to the landfill.

“At a friend's wedding, there was one small bag. What did that bag contain? Things swept from the hall. That's it. Everything else was either reusable, composted, fed to a biogas plant, or completely avoided.The average wedding has each person using a minimum of five to seven pieces of disposables at the lunch area. However, with just a little thought, that number can be zero,” says Shyamala.

Just doing away with single-use disposables reduces carbon footprint greatly, right from the resources and energy used to packaging, storage, transport, and then the transport to the landfill after just one use.

It is mind-boggling when we think of how much lower the carbon footprint is for a steel cup, which can be used thousands of times.

While not many people are sensitised towards the environment, they are open to going green and having an eco-friendly wedding. Shyamala feels that what makes them switch is merely the understanding that their actions have a huge negative effect on the environment and knowing that they can easily change that.

Irrespective of the scale, the cost of a green wedding is lower than the usual kind. The wedding, right from its look to the experience, is a lot better when we avoid environmental hazards. People who are looking for a low-cost wedding can get one without compromising on the quality of the experience. Shyamala says,

“If wedding planners and organisers were to only provide reusable cutlery, dismantlement, cloth-based decorations, and innovative ways of inviting, people would jump at it because it is classier.”

Shyamala, who is currently working on the editorial board at the Indian Institute for Human Settlements and also teaches solid waste management from time to time, says that there are tremendous prospects for green wedding planners, and she may soon turn into one. Talking about her own wedding plans, Shyamala says her guests will be served a naturopathic meal, with no processed or animal food in it.

Although she’s not a wedding planner, she says she’s happy to help people get started, and can be reached on her Facebook Profile. However, to reach a green wedding planner in Bengaluru, one can contact Ganesh: [email protected].