Sustainable water methods, and not tankers, are the solution to India’s economic water crisis 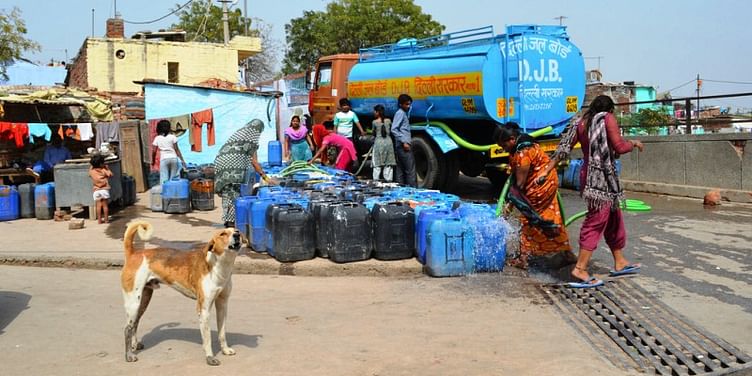 A recent study published in international journal Science Advances says that 80 percent of the Indian population deals with a severe water shortage for at least one month in a year.

Following two consecutive failed monsoons, India faced its worst water crisis in four decades in 2016. Eleven states – Maharashtra, Andhra Pradesh, Telangana, Karnataka, Rajasthan, Gujarat, Uttar Pradesh, Chhattisgarh, Madhya Pradesh, Jharkhand and Odisha – staggered under severe drought, with districts like Marathwada and Latur in Maharashtra not having so much as drinking water. Farmers left their parched lands and moved to cities in search of work while governments scrambled to provide relief to the worst hit areas. But extreme meteorological events aren’t solely responsible for the kind of distress that paralysed these regions. Maharashtra, despite having the largest number of dams in the country as well as a heavy irrigation expenditure, can only boast 18 percent of irrigated farmland, leaving the rest to depend upon rain or to be crippled by dry weather as they did last year.

Government mismanagement and inadequate planning has led to an economic water scarcity in the country, which is magnified whenever there is a water distress. And rural and slum residents who struggle to access water even under normal circumstances always bear the brunt of it. According to the Indian Household Development Survey (IHDS), one in four rural households have to walk for more than 30 minutes to reach a drinking water source, where they have to further wait for a certain amount of time before getting their turn. Multiple trips are made by family members each day, especially women, who carry heavy containers back home over rough and uneven terrains. In certain regions, men resort to polygamy just so that the house can have an extra member to fetch water. The situation doesn’t get much better as we move to urban areas, where, based on the IHDS, 20 percent of households walk for more than half an hour to collect drinking water.

Though National Rural Drinking Water Programme (NRDWP) reports substantial coverage of rural areas with tap water and hand pumps, unreliable supply and poor maintenance prevent people from utilising the sources completely. A majority of them largely depend upon groundwater for both domestic and occupational needs in the absence of a regular public water supply. And its immoderate extraction, mainly because politicians shy away from regulation to protect their vote banks, has led to a sharp drop in groundwater levels in the country. The Central Ground Water Board (CGWB) recorded a decline in water in 64 percent of wells nationwide in January 2016. Yet people continue to dig deeper wells, which is not only environmentally and economically unviable but also dangerous to consumers due to natural concentration of arsenic at higher depths.

A report by WaterAid in 2016 revealed that 75.8 million people in India do not have access to safe drinking water. It further notes the role of economic status in exclusion from water supply, especially in times of scarcity as “black market vendors may ramp up prices even further when supplies are low and demand is high,” which is what happened in Marathwada last year. The “water mafia” sold privately sourced water to drought-hit residents at inflated prices who were already suffering from failed crop and mounting debt.

Per capita availability of water has slumped to 1,123 cubic meters from 3,000 cubic meters just 50 years ago. Illegal sand mining, cultivation of water-intensive crops, widespread pollution of water bodies, groundwater exploitation and neglect of water storage equipment are collectively contributing to falling water levels in the country. Freshwater sources are dwindling but their requirement for domestic, agricultural and industrial purposes is on the rise, which only widens the existing demand-supply gap. A recent study published in international journal Science Advances says that 80 percent of the Indian population deals with a severe water shortage for at least one month in a year. Considering the rate at which water resources are declining, people will soon be forced to face much prolonged yearly water scarcities.

But simple methods of water conservation can ensure sufficient water supply, in times of a shortage or otherwise. Several water-starved rural areas, either with the help of non-governmental organisations (NGOs) or through individual initiatives, have shown the merits of prudential water usage.

In Rajasthan, multiple villages follow a traditional concept of water harvesting and its success is encouraging its revival in neighboring areas as well. Structures known as ‘beris’ are dug at varying depths in strategic locations to access rainwater trapped in the soil. They are three to four metres wide at the bottom but less than one metre in width at the mouth to counteract evaporation. Builders remove soil till they reach a layer of clay or gypsum, which prevents the stored rainwater from seeping further underground. This naturally replenished source provides families with water year-round in the arid region, even during drought. Women in these villages no longer have to walk long distances for water, nor do families have to migrate because of scarcity.

The Desphande Foundation, an international NGO, through its water programme 'Neer Sinchana', ensured the construction of more than 1,700 farm ponds in villages in Northern Karnataka. The ponds collect and store precipitation throughout the year and have the capacity to irrigate a five-acre land growing four short-term crops over six months. They have enabled farmers to boost both production and income as well as stave off the devastating effects of drought.

Perhaps the best example of water conservation comes from Ayyappa Masagi, more popularly known as the “water doctor” of India. On a land in one of the driest parts of Andhra Pradesh, Masagi dug four lakes and 25,000 sand pits to capture every drop of rainwater that falls in the region. Whenever necessary, percolated water is retrieved from the sand pits using bore wells. The entire area is surrounded by trees and crops, turning it into an organic farm that is self-sufficient in water. Through Water Literacy Foundation, he is training more people whom he calls “water warriors” in his techniques of water harvesting.

While better resource management and water policies are fundamental, there has to be awareness about the necessity and benefits of water conservation. A collective public effort is important to reducing wastage and preserving sources. As Masagi points out, his concept can be replicated globally “once the community attitude changes, once our political attitudes change.”

Reckless treatment of water without a concern for the future is why we hopelessly flounder during dry spells. Climate change is a reality. And extreme weather events are inevitable. If both the public and governments continue in our failure to check unsustainable water practices, the combined effect will no doubt leave us with frequently empty reservoirs, dried up rivers, failed crops, power outages, halted industrial activity, and more number of regional and state conflicts. Let the Cauvery dispute be a reminder of the violent chaos that follows.

How Credgenics ‘SaaS’ed the lenders loan recovery and resolution game