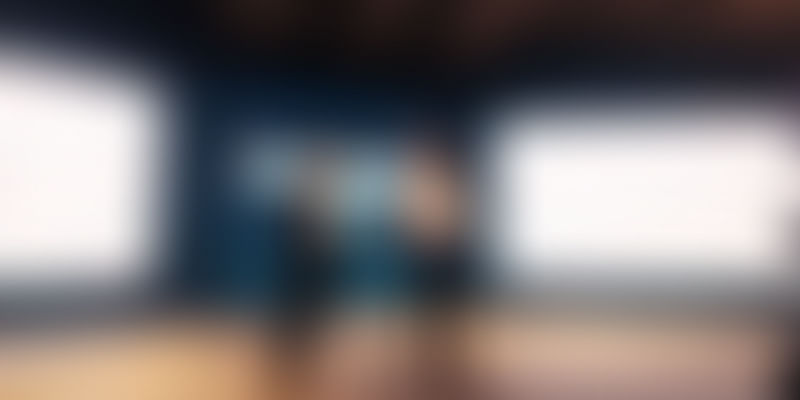 When YourStory spoke to Nami Zarringhalam, Co-founder and Chief Strategy Officer of Truecaller, a month ago in Bengaluru, he hinted at a big announcement at the end of March.

And here it is. On Tuesday, at Lalit Ashok in New Delhi, Nami and Alan Mamedi, Founders of Truecaller, announced the launch of their new app, Truecaller 8.

Founded in 2009, in Stockholm, Sweden, as a call identification app, Truecaller today has evolved into something significantly bigger. From launching an all-inclusive communication app, making TrueSDK platform agnostic, to partnering with ICICI Bank to launch True Pay, Truecaller has gone beyond what it initially set out to do.

Apart from launching the communication app, Truecaller is also partnering with Airtel to bring call protection and call identification for feature phones.

Why choose to bring Truecaller to feature phones? Nami explains that the company decided this looking at the whopping 65 percent of the Indian market that still uses feature phones.

What can the app do now?

Truecaller's all-inclusive communication app will not only integrate True Messenger and a redesigned Truecaller dial page but will also include Flash Messaging, which allows a single tap, real-time instant conversations with family and friends. It also helps the user know where people are.

“There are times when you just want to know where your friend or your loved one is, or send an instant message, feeling or emotion. That is exactly what Flash Messaging does. Truecaller 8 has a redesigned suite of experiences making communications easier.”

“Users want to make video and voice calls directly from Duo. Truecaller also chose Google because Duo focusses on the use of better user experience, with lower data connectivity.”

Leaving the big news to the last, the team announced its partnership with ICICI Bank and the launch of Truecaller Pay. The feature will be available to both ICICI and non-ICICI users.

With Truecaller Pay, users will be able to create their Virtual Payment Address in the app and can send or receive money using the services of a UPI-supported bank.

In addition, users can also do prepaid and postpaid recharges.

For over a week now TrueCaller has been pushing out teasers and tweets that hint towards the announcement of something big.

Launching an all-inclusive communication app and a wallet that is powered by ICICI bank is indeed big. Especially in a market that already has big wallet players like FreeCharge and Paytm.

Interestingly, the Founder of FreeCharge, Kunal Shah, also happens to an advisor at Sequoia Capital, which is an investor in Truecaller.

Speaking of their India market and getting Sequoia on as an investor, Alan says,

“We had never come to India. It was only in 2013 when we met Mohit Bhatnagar and Shailesh from Sequoia did we realise how big the Indian market actually is. Today we have operations in Stockholm, Bengaluru, Delhi, and Mumbai.”

Last year, Truecaller launched its SDK in Bengaluru, and the company is also doing aggressive hiring for its development centre in the city.

Within a year of its SDK launch, the TrueSDK is now going platform-agnostic. The developers will see the rolling out of the SDK across iOS and Android.

Nami, in an exclusive interview with YourStory, earlier had said:

“When we started Truecaller, the systems weren’t based on Android or iOS — we had to work with a Windows phone and go through a rather cumbersome process of connecting to a laptop, downloading it there, and then opening it again on the mobile phone.”

Very much like WhatsApp, Truecaller has seen considerable growth in key emerging markets like the Middle East and Asia. The app has created a way to break the mobile silos. It has seen great growth in countries that have a high and growing smartphone penetration.