Meet the 29-year-old entrepreneur who is educating the waste picker children of Jalgaon, Maharashtra

A resident of the Jalgaon district of Maharashtra, Adwait Dandwate initiated Vardhishnu, an organisation to provide young waste pickers with a gateway to education.

Started in 2013, Vardhishnu is home to almost a hundred children working as waste pickers in the district of Jalgaon in Maharashtra. Adwait Dandwate (29) founded the organisation along with his wife, Pranali Sisodia , when he decided to dedicate his life to taking care of needy children in his hometown. Varshishnu, being only four years old, has notched up significant achievements in inclusivity.

Adwait conceived the idea of Vardhishnu while working on a social experiment that intended to understand socio-politico-economic situation of 400 children in the district. He concluded the need to have a better provision of resources for the children. He soon initiated a helpline for people based on their age and experience. Understanding the difference in the learning pace, he created three categories, with technical classifications in the teaching design for each. Starting with children (below the age of 15), he created categories for youth (age group between 15 and 30) and adults (above the age of 30). The organisation pays attention to their education and health issues, also dealing with substance consumption and addiction.

Soon, the organisation saw around 120 children below the age of 15 (the youngest being five) being enrolled, and this led to the need for a stricter remodelling of the structure at Vardhishnu. Adwait, seeing how the children were at an impressionable age, and easily took to substance abuse, realised the need to keep them at the Vardhishnu premises for as long as possible during the day. The organisation collaborated with another one called Anand Ghar, which provides children with basic education.

With a liberal and student-friendly environment, Vardhishnu tries to compensate for the exploitive structure of the municipal schools most of these children go to. The dropout rate in these schools is as bad as 90 percent. It has also collaborated with local schools in the district that follow the same model and help children in language efficiency.

Vardhishnu is supported by companies, on their CSR initiatives. The present team comprises 12 people, with Adwait and Pranali supervising the organisational executions, with three full-time and three part-time teachers. There are many doctors and counsellors also who provide the children with constant guidance and assistance in terms of coping with addiction.

Adwait's source of inspiration is Dr. Abhay Bang, who is a social activist responsible for initiatives such as SEARCH (Society for Education, Action and Research in Community Health) and NIRMAN, and is the one who helped him realise his passion for the social sector. It was projects such as successful decline in the infant mortality rate in Maharashtra by SEARCH that drove him to pursue his dreams.

Adwait envisions Vardhishnu to have access to not just one of the sectors of Jalgaon but the whole of it, where children go to school, at least till Class X. Vardhishnu is raising funds through crowdfunding to make this possible.

It has proved to be an inspiration to many to contribute to the social change desired and required by this country as a whole. 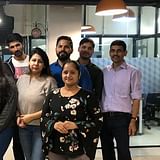