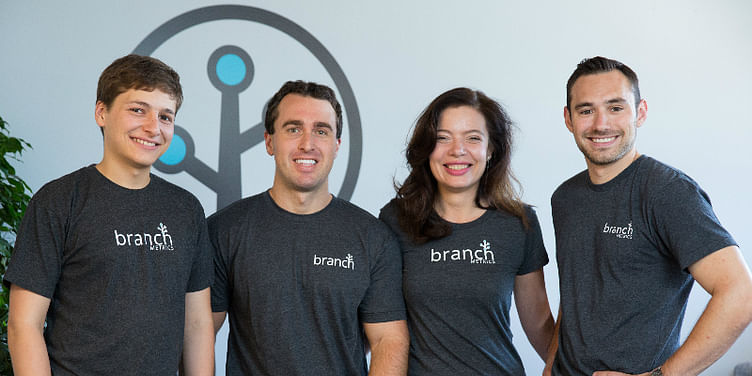 Branch, the linking infrastructure platform for app developers and marketers, announced on Wednesday that it had raised $60 million in Series C funding led by Playground Ventures, the venture fund founded by Andy Rubin (one of the co-founders of the Android operating system). This round also saw participation from New Enterprise Associates, Founders Fund, Pear Ventures, Samsung Ventures, Madrona Ventures, Cowboy Ventures, and Ben Narasin.

Talking to YourStory, Govind Kavaturi, Evangelist for Branch in India, noted that Branch aims to expand its footprint in Asian markets like India, Indonesia, and Singapore. The Branch India team currently consists of five full-time and five part-time employees and now as part of their expansion plan, Branch aims to hire full-time service staffs, to cater to the Indian audience. So far, the US service staffs were also catering to the Indian customers.

Branch (then Branch Metrics) was founded in April 2014 by Alex Austin, Mada Seghete, Mike Molinet, and Dmitri Gaskin in Palo Alto, California. In early 2014, they were working together on Kindred Prints, a photobook printing app and were frustrated by the limitations imposed by app stores on user acquisition. Looking for a workaround, they developed an in-house solution that could help them in user acquisition through links that passed data through installs to help grow their app's user base.

They realised there was a big potential for such as solution among the app developer community and hence started Branch to go after the market. In early 2015, the startup raised $18 million in funding from multiple investors. At almost the same time, Branch having seen a lot of sign-ups from India and banking on the dominance of mobile internet in the country, decided to set up a base in India.

Then in January 2016, Branch announced that it had raised a $35 million funding led by Founders Fund, with participation from all existing investors, including New Enterprise Associates (NEA), Pejman Mar Ventures, Cowboy Ventures, Zach Coelius, and Ben Narasin, and new investor Madrona Venture Group.

Since its founding, Branch noted that it had evolved into a robust mobile linking platform with solutions that enables over 10,000 companies to drive app growth and engagement across channels and platforms. Some of the startup's global clientele include Airbnb, Pinterest, Reddit, Tinder, Starbucks, and Slack. Coming to India, Govind noted that Branch has about 3,500 clients like Zomato, Goibibo, and Snapdeal. While their basic hyperlinking integrations are provided free of cost to customers, Branch currently runs on a SaaS model and generates revenue from premium integrations like their deep linked email feature, data integrations, re-targeting ads, and their 'Journey' Smart banner features.

Branch noted that it has enjoyed strong growth across all industries and will use this funding to accelerate the adoption of its deep linking platform to improve the mobile experience and unify marketing attribution across channels, devices, and platforms. Branch claims to have crossed some major milestones, in terms of growth. They include:

Branch’s industry-leading deep linking technology and wide partner network, including the largest email service providers and ad networks, make it the one-stop shop for companies to build a successful app business with an optimal user experience.

Branch currently has about 90 members on their team globally. Alex, CEO of Branch, noted in a statement that links were the foundation of the internet, helping users making the transition from one website to another completely seamless. However, since native mobile apps have become the preferred medium for engagement, those traditional web links have broken, leading to wasted marketing spend and leaving users with frustrating experiences. Talking about how Branch solves this pain point and the future plans, he said:

Govind noted that India has seen tremendous growth so far and is currently Branch's second largest market (after the US) in terms of customers. But going forward, he sees tremendous growth from other Asian markets mainly Indonesia and Singapore

Globally, there are other players like AppsFlyer, Deeplink.me, Quixey, and Appsfire that are also working on deep linking technologies. Facebook too has developer tools for deep linking mobile ads. But now native mobile apps are slowly competing with new-age apps like Progressive web apps (PWA), Instant apps, and Chatbots. Talking about this, Govind mentioned that it is probably too early to comment about Instant apps, as they haven't been rolled out fully yet, but for the other new-age platforms (PWA, Chatbots), deep linking will still play a key role as they would still rely on links and getting users to access different native mobile apps to complete transactions or read an article.