With 55 pc retention and revenue growth of 700 pc, Myra is poised to transform pharma delivery 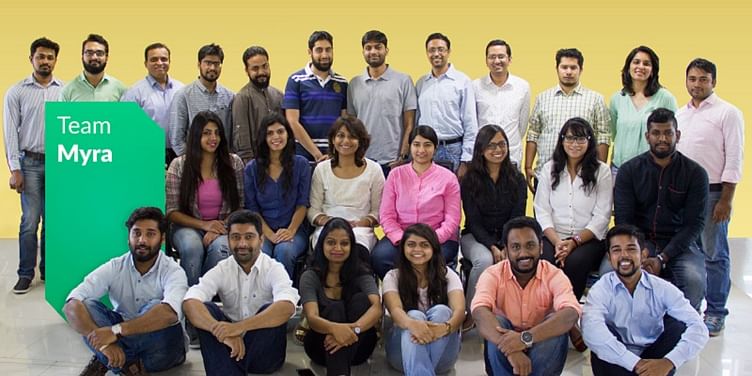 While Myra Medicines, the online pharmaceutical company, has now succeeded in raising its Series A funding in a round co-led by Matrix Partners and Times Internet, the online pharma company’s journey began out of impatience.

Programmers are impatient people. “We are used to pressing Command B and ensuring that everything builds in one second,” says 28-year-old Faizan Aziz, Co-founder and CEO of Myra Medicines, a Bengaluru-based startup that promises to deliver medicines at your doorstep within an hour. Faizan believes that it is this very coder and programmer impatience that got him and his friend from R.V. College of Engineering in Bengaluru to start Myra.

The company buys medicines directly from manufacturers, and stores and delivers them from its warehouses located across the city. This ensures better control on operations, superior margins, and most importantly, a smooth customer experience. Myra operates its own warehouses (full stack) to ensure that it provides its customers with the best quality of medicines, without compromising on the experience.

From building a questionably legal calling technology to a game on the app store, it is clear that the founding duo of Faizan and Anirudh Coontoor are tech and engineering geeks. A self-confessed Apple fanatic, the first iPod Faizan got was from his aunt.

“I was stoked. The number of songs I could upload in that device was insane. So Ani and I pooled our resources and bought an iPod touch. It was on the iPod touch that we built the game Space Heist. I think it’s still there on the store, because I haven’t pulled it down yet,” explains an enthusiastic Faizan.

The duo made close to $5,000 in their first two months of building apps and games on the app store. They were young 18-year-olds then. They went on the reluctantly join the corporate world. Faizan joined Netapp, and was later a part of Dexetra. After a year in Dexetra, he quit and decided to co-found a startup with Anirudh.

Anirudh, meanwhile, had joined Nokia after college and was there till he decided to start out on his own.

The very first impression Tarun Davda, Managing Director, Matrix Partners, had of Faizan was that of simplicity and sophistication of thinking. Tarun adds,

“He is uncomplicated and seems to always find some technical hack to come to the right answer. There is a quiet sincerity and focus that the founders display, which is endearing. But after my first meeting, I have also learnt that the guy is extremely assertive towards his focus on technology, numbers, and a lean team.”

Can you make that faster?

When Myra first started, it had a 30-minute delivery time. This time frame has now increased to sixty. It was in the initial impatience that Faizan spoke about that the idea for Myra germinated. He says,

“Ani and I were discussing what our startup should be around. And during our talks, Ani would keep telling me that he would never buy online, because the whole idea of waiting for 24 to 48 hours for a delivery wasn’t digestable. When I asked him what was acceptable, he said 30 minutes,” says Faizan.

So, that was the time frame they started out with when the initial idea was being discussed in 2008. However, when the team started working on the model, they realised that, on paper, the concept of a 30-minute delivery just wasn’t feasible. The concept of combining last-mile delivery and medicines came when Faizan fell ill, and three days later, his wife fell ill as well. Faizan explains,

“I simply hated the process of going to the doctor, taking the prescription, and going to the pharmacy again. Having to do it when I was unwell again three days later was just insane. So, one day, with complete passion, I called Ani and spoke about building some insane technology. I remember Ani telling me to go back to sleep and let the medicines wear off.”

Following the advice, an hour later, Faizan came up with a more feasible plan. The duo then zeroed in on a just-in time delivery service combined with medicines. Taking 45 days, the two of them visited 100 retailers, 50 distributors, 50 doctors, and 150 customers, just figuring out the pain points.

They found the medical industry to be completely fragmented, and there was little use of technology. Faizan adds that this led to a margin structure that wasn’t uniform. “We focused primarily on ensuring a medicine delivery service,” he says.

He adds that their definition of a good service is a service that is reliable, because when it comes to medical services, trust is the key. But reliability and speed is easy with 1,000 products; it is when that touches 20,000 products that the challenge takes on new dimensions. “This is where my stint at Dexetra helped in using data science and technology optimally,” says Faizan.

Today, Myra claims to have an 85 percent fulfilment rate, with 22 days' inventory. When they started, the fulfilment was at 60 percent. In the initial days, the founders were responsible for 80 percent of the deliveries, and they would use their own bikes for this. Faizan says that it wasn’t that they couldn’t afford the delivery boys; it was more about speaking to the customers and understanding the need better.

Sharing an anecdote of that time, Tarun says,

“When we looked at the customer repeat data, the first thought my colleague had was that this was too good to be true. I had asked my colleague Raghav to be present at the Myra warehouse and see whether the metrics were actually true. And he even went with Faizan for a few deliveries, which Raghav recollects to be one of the scariest experiences, considering the speed at which he was driving!”

Despite that, Faizan believes that the biggest learning experience the team got was from those days. He adds that Myra has a 55 percent retention rate. Myra’s warehousing capability and data science platform allows high availability of medicines.

The team claims that their revenue has grown by more than 700 percent over the last year, driven entirely by strong word-of-mouth referrals from its loyal customer base. “We grew to about a 100 orders a day in no time,” adds Faizan.

The focus has been on processes, like the use of a just-in-time routing system that calculates routes based on the orders that come in. The warehouse at Myra is completely automated. Faizan adds that they have used the existing systems and built on top of the same. He further says that while they could have built something on their own, it just didn’t make sense to the team.

With this level of automation, Faizan says that the checkout time dropped to four minutes for a cart size of five items at an average. The team claims that, on an average, delivery personnel deliver two orders in an hour. Ensuring automation from day one reduced the costs significantly, and ensured increased fulfilment rates.

Miten Sampat, VP-Corporate Development, Times Internet, adds that there are few companies in India that have been successful infusing technology into operations as Myra has.

The pharma industry is currently pegged at $15 billion, and some of the issues that the sector faces include low fill-rates, delivery delays, and expired and spurious medicines. Despite the regulatory challenges, the pharma space is growing significantly. Some of Myra’s competitors include Sequoia-backed Practo and 1mg, and Bessemer-backed PharmaEasy, which recently raised a Series B funding of $16 million.

Many believe that the concerns in the online pharma world are due to the lack of a regulatory framework. The pharmaceutical business falls under the Drug and Cosmetics Act, 1940, formed long before the nation was introduced to the internet. Thus, it comes as no surprise that it has no mention of the online sale of medicines.

“These people are doing over tens of thousands of orders per day. And that is where the real competition for players like Myra is. Today, as a customer, one may buy online with the available discounts, but when the discounts stop, the customer will not choose to wait for 24 or seven hours for the medicine. In the long run, the player who can deliver medicines to the customer within an hour will be able to compete. I believe Myra is in the right space to compete with the offline players.”

Currently, Myra has a core team of over 20 people, and if the delivery boys are added to that, the total team size stands at 300. This current funding that the team has raised will essentially be used to accelerate product development, expand operations to other cities, and hire new talent across engineering, data science, and operations.