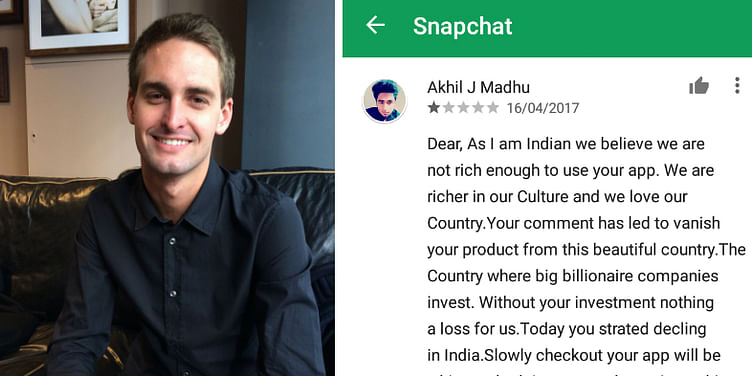 Snap Inc. CEO Evan Spiegel has categorically denied the comments his ex-employee alleged he made in a 2015 meeting, about Snapchat being an "app for rich people" and that India, being a poor nation, was not a lucrative market for Snapchat to expand to.

A detailed article carried by Variety showed excerpts from an expose-esque twenty-page-long statement filed by Anthony Pompliano, a former employee at Snapchat, who is suing the company for some dubious practices carried out under Evan's tutelage. An excerpt of that statement alleged that the Snapchat CEO Evan Spiegel, when told in a meeting that Snapchat was performing poorly in foreign markets, interjected that “this app is only for rich people. I don’t want to expand into poor countries like India and Spain.”

Snap Inc. reached out to YourStory with an official statement countering these claims, and has gone on record to say, "This is ridiculous. Obviously Snapchat is for everyone! It's available worldwide to download for free."

The press release they have put out also contains a clarification on the section of Pompliano's statement that alleged that Snapchat was inflating its numbers when presenting them to their investors. "In the notice we filed with the court when we unsealed Pompliano's original complaint (attached), we wrote: 'Snap did not give investors misstated user metrics back in 2015; nor did Snap employees commit any of the panoply of alleged bad acts that litter Pompliano's complaint. Snap will demonstrate as much at the appropriate time in the appropriate forum'," reads the statement.

The statement went on to point out that Evan, in fact, champions entrepreneurship in India specifically, and in 2015, travelled to speak at the Economic Times Startup Awards.

The coverage of Pompliano's statement ruffled quite a few feathers amongst Snapchat's Indian users, with the hashtag "BoycottSnapchat" surfacing on social media, urging users to give the app a one-star rating and then uninstall it as a sign of protest. The ratings on the app fell sharply overnight, as people complied and rushed to the defence of their nation, without understanding that the statement contained mere allegations that had not been proved in a court of law yet. The Google Play Store listing of Snapchat has thousands of one star ratings and a string of comments from Indian users stating that they have chosen to act as a rebuttal to his statement.

Some users, however, even pointed out on comment threads of the articles published by various portals that India is a tough geography to monetise. "A true but hard fact is that the Indian market does not monetise well! Average revenue per user is way too low in comparison to the cost of acquiring a customer," says Facebook user Ravindra Sonavane. His rationale, however, did not prevail as the popular opinion, as many users continued to diss Snapchat.