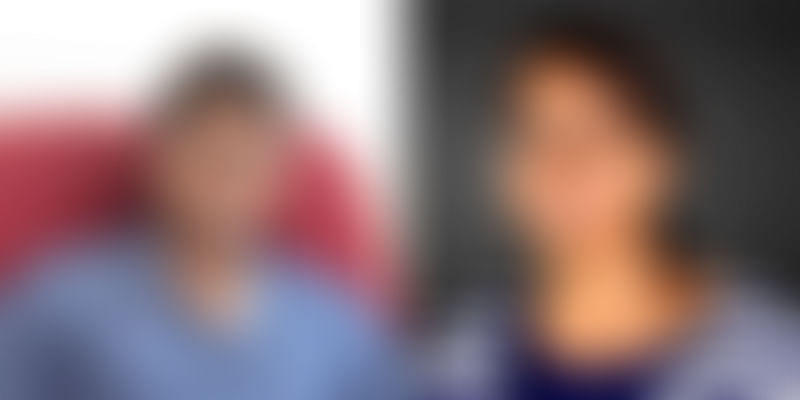 Given their love for practical learning and robots, Sneha Priya and Pranavan, classmates pursuing electrical and electronics engineering, joined hands in 2008 and in their third year kick-started their entrepreneurial journey with SP Robotics.

A few years down the line they took off with Kidobotikz, their e-learning offering focused on maker-centric education for ages 11 and above.

Today, they aim to be the gateway to exploring technologies and showcasing innovations by people of all ages, everywhere.

Sneha may never have attended formal classes on hands-on technologies, but her passion propelled her to do her own research and pester her parents for the things she would need for experiments. From a 15-year-old playing with lights and motors, the Chennai girl graduated to attending College of Engineering, Guindy at Anna University. This #womanintech is the co-founder and CEO of SP Robotics.

Pranavan was born in Sri Lanka but moved to India in 1997 to pursue his studies. At the age of 10, he created a clap-activated light when he realised his family struggled to track a torch during power cuts. Encouragement led him to build more—cars, wireless planes, etc. He is the co-founder and CTO of SP Robotics.

Together, Sneha Priya and Pranavan participated in both national and international competitions. Pranavan would take care of the electronics and mechanical aspects, and Sneha would look at the algorithm and programming part. “All this gave us a lot of exposure and we wondered why we hadn’t started earlier.”

Without wasting much time thereafter, they started providing industrial solutions through a small website, SP Robotics. “We listed all our projects and were shocked to see so many requirements pouring in for indigenous and cost-effective solutions which were not available in the market. Simultaneously, to create an awareness that robotics tones overall technical skills, we listed over 50 of our products online for students to take up and create their own robots,” shares the duo.

After graduating in 2012, the urge to provide education and skills to people led them to start Kidobotikz, an education brand where they would train people from the age of 11 and above. The couple of lakhs they had earned through company activities helped them kick-start it.

With curricula developed in robotics, IoT, image processing, 3D printing, drones, and many more emerging technologies, they started teaching from a centre in Chennai. Their students were mostly college students and corporates who wanted their engineers to be up to date with technology.

“We ensured that all this learning was not merely fun but also measurable in terms of skills gained in the fields of electronics, mechanical, programming, and algorithm, thereby helping people understand their strengths and where they need to focus on improving themselves.”

Since they could accommodate 150 students and there was a need to scale and increase customer value, they looked at different methods of scaling including the franchise model. They gave out two franchises but shortly backtracked when they spotted the lack of availability of quality technical educators.

Building a strong community of interested individuals proved to be the best approach and they added value by offering more activities such as industrial solutions, competitions, and social projects like Swachh Bot, which received the PMO’s appreciation. The most recent winner to emerge from this community is the food-serving robot BOB (Butler ‘O’ Bistro). Developed by Kidobotikz community members Arjun (13), Anish (12), Srivatsan (13), Varsha (20) and Rajesh Varma (Arjun’s father), this robot employs an array of sensors and algorithms to serve food and earlier this month was introduced in Bengaluru’s VR Mall. Built in two months with the help of

Kidobotikz engineers, it has generated much interest.

Revenue-wise, too, the community turned out to be profitable as it helped increase customer value. Sneha claims that from a revenue of Rs 10 lakh in 2012 with 150 students, they reached Rs 1 crore- in three years with the same number of students.

While the community has held them in good stead, to scale they adopted a model where they designed and developed hardware kits which could be used with the AI-assisted online platform. “AI detects poor understanding of concepts and repeats them in different ways just like a physical teacher. It customises the entire course depending on the way of learning, it gives customised time targets for people to do the practical experiments, it measures the skills gained, it suggests what can be done next” says Sneha.

While they were working on this they crossed two milestones—they tied the knot in 2015 and raised funds in 2016.

Funding came from Indian Angel Network and the Chennai Angels and within three months they had the online platform along with the kits ready for the market. The product was released last June and they received an overwhelming response with over 200 pre-bookings. “We are now in the Mauritius, Thailand, and Singapore markets too, proving the scalability of the product. Within just six months of launching the online product, we gained traction of Rs 1 crore and over 1,000 orders,” shares the duo. Their team has expanded, too, going from 20 to 50.

There are multiple companies like Lego, Sphero, littleBits, and Makeblock that create educational robotics products. However, these are inclined towards the toys segment and DIY kits. Sneha and Pranavan claim their USP is that they are teaching not just robotics but also emerging technologies.

“Our products are open for exploration. People can make mistakes and learn—they are not plug-and-play. And the learning that happens with our product tracks the analytics of skills gained, which hugely differentiates us from the other players,” they say.

The company's focus is on the K12 segment (11-17 years) which, according to Sneha, is a $22-billion market worldwide, with India’s contribution being around $2 billion. The duo believes that with the advent of the fourth industrial revolution, the requirement of skill development is at a steep growth with a current CAGR of 18 percent. “We are aiming at a $330 billion market in seven years (with our services catering to K12, higher education, and corporate training),” says Sneha.

While their core focus is on the B2C model where people can buy directly online from their website or other online/offline partners, they also have B2B models (schools, colleges, small private institutions, corporates) to reach more users and make them aware of such a product.

Going forward, they have a two-pronged approach. On the product side, they plan to release new kits on emerging technologies every quarter, backed by AI-assisted learning online. Plans are also afoot to strengthen the online community with gamification and stronger AI for more interaction and better learning.

On the business side, they are planning their next round of funding so as to increase branding and marketing activities in India as well as increase their presence in a few more APAC regions. “We plan to have 2.5 lakh individuals on our platform within two years,” says Sneha.

Given their love for technology, to build and to help others learn keeps them going. “The interest to see and be part of innovations cropping up in every house due to our product is something that drives us.”