Meet the young economist-turned-entrepreneur Vikram, who is stirring up a millet revolution 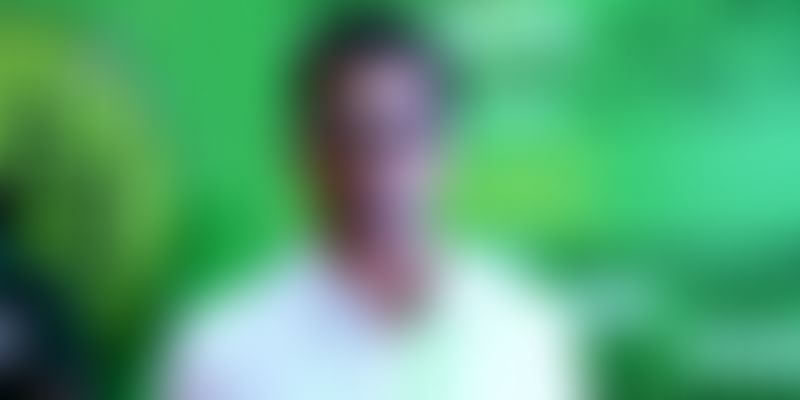 This 32-year-old has walked the long walk from the corporate world through eye-opening and jolting realities to the beckoning dry Indian soils. Vikram Sankaranarayanan's story is one of how a driven entrepreneur is made.

Amidst the crowd of thousands of enthusiastic farmers who had come to Bengaluru from all over Karnataka for the National Trade Fair organised by the state government was a beaming 32-year-old.

Vikram Sankaranarayanan was exuberantly greeting people at the organic millets fair that he helped organise with Karnataka's Minister of Agriculture, Krishna Byre Gowda.

Who is this young, energetic man, you ask?

Vikram is currently an economist-turned-social entrepreneur who owns an agro-company, SanLak Agro Industries Pvt. Ltd., which is re-connecting farmers with millet cultivation, and directly connecting them with consumers hungry for organic food. He also owns a brand called Smilyfe, which sells minor millets like Barnyard, Kodo, and Amaranth with millet-specific recipes to re-connect consumers with traditional foods.

But before he became a steadfast entrepreneur, Vikram was working in the corporate dynasty of Ratan Tata’s Tata Group. “But corporate life was not for me,” he says, in a conversation with YourStory. “I was doing really well, but I just wasn’t passionate about it,” he remarks, speaking like a true entrepreneur.

Where did his passion lie? Vikram knocked on the doors of the London School of Economics, with his interests vested in labour economics, industrial relations, and public policy. Armed with this knowledge, he then returned to the Indian soil to dig for applicable solutions for social problems. His first venture, which was to extract water from fog in high altitude areas for drinking purposes, however, turned out to be too ambitious, and not within his financial reach.

But this venture introduced him to his mentor, who in turn introduced him to the Holy Grail of sustainable agriculture, the wonder grain – millets. Vikram recalls how Santha Sheela Nair, a retired IAS officer and the former Vice Chairman of the Tamil Nadu State Planning Commission, was enraged when he proposed the idea of introducing quinoa as an alternative to water-intensive crops.

Millets like ragi and jowar are drought-tolerant, low investment, and low-risk crops, require minimum fertilisers, and have a plethora of health benefits to offer when compared with non-indigenous cereals like quinoa and oats. Vikram soon realised that millets were the balm that farmers needed.

Getting his hands dirty

With a purpose that was now slowly taking distinct shape, he hitchhiked for four months through the rural vistas of northern Maharashtra, southern Andhra, Tamil Nadu, and Karnataka. As an economist, he was already aware of one grim reality: out of the 60 percent of the Indian population engaged in agriculture, only two percent led a sustainable enough livelihood to contribute to the GDP, which meant that the majority of farmers in a predominantly farming country were drowning. “This really scared me!” he recalls.

The ground reality, however, gave him a clearer picture. Vikram found that most of these farmers were forced to grow water-intensive food, commercial, and GM crops for two reasons: firstly, the consumers’ demand for crops like rice and wheat gave them no incentive to grow millets. Secondly, private companies like Monsato had ensured that farmers remained dependant on them as the seeds for GM crops need to be purchased every year. The farmer’s independence that comes from sowing seeds of the previous harvest was taken away.

Vikram, who was seen as a “western educated boy”, coming from a privileged and entitled position, found it extremely challenging to convince these farmers to grow millets. But he eventually earned their trust, and now works with Framer Producer Companies (FPCs). This is a network of small-scale farmers with no access to water or pesticides, who own lands that are mostly fallow. “We make them the shareholders of their companies. We empower these people rather than making them dependent on the government,” he stresses.

The brainchild aiming to revolutionise agriculture

Vikram’s social enterprise SanLak’s significant contribution to the agricultural industry, a feather in its cap, is SS304. Technicalities aside, SS304 is a stainless-steel primary grain processing machine, which, albeit available in India, has never been used before, as Vikram reveals. But what is so special about this machinery? Vikram explains,

“The most widely used mild steel machinery rusts very easily, and this discharges nanoparticles in the processed grain that are highly toxic. With SS304, we are raising the safety and quality of food reaching the table.”

This increase in the standard of processing has hiked the export value of millets, the primary beneficiaries of this being the farmers. When asked if production costs (which directly affect the price of the crops for consumers) can still be kept minimal despite the costs of high quality, Vikram explains that there is only a five percent marginal increase.

With proficient researchers coming onboard, SanLak has been guiding farmers with research-based cultivation practices that ensure high yield. They procure the produce directly from farmers at the market price, process the grains, and give the farmers 10 percent additional revenue as an incentive to grow more, and continue growing millets.

“Every human being has a human capital, and this capital needs to be empowered,” says the economist, businessman, and potential change maker.

(All photos by R Raja)