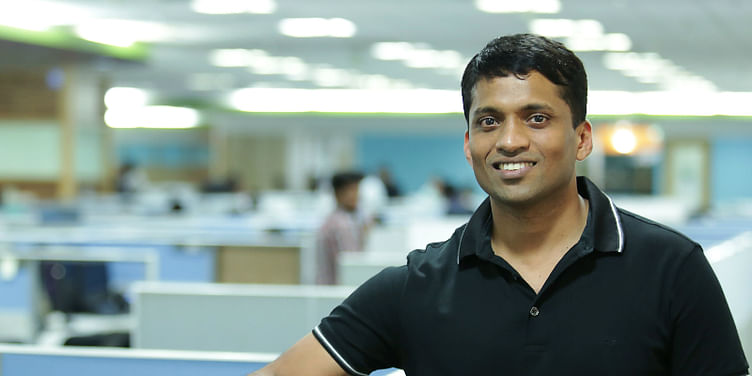 Byju’s today launched the new personalised version of its app. At a press conference, Byju Raveendran opened up on Byju’s way forward.

Byju’s today is one of the biggest fish in the edtech pond. It is called as the largest funded edtech startup in India and today, Byju Raveendran, the Founder and CEO of Byju’s, said in a press conference that they are on the path to becoming a profitable unicorn.

Today, Byju’s launched a major update on its app, with a focus towards providing a personalised learning experience to students. The newer version of the app will feature unique learning journeys, actionable feedback, recommendations, and guided paths, making the app more interactive.

The learning journeys for each student will be determined basis their capabilities and proficiency levels and is personalised according to their needs. Byju added that based on the level of understanding for each student, the right ‘Learn Journey’ is recommended.

Byju’s will also be creating learning products in local languages to reach out to students across different regions. The Bengaluru-based edtech startup also launched a Parent Connect app that provides its students with a real-time update on every student’s progress. The app will help parents stay up-to-date and involved in their child’s learning journey.

“Learning today is all about ensuring that you pass in your exams. It isn’t about understanding or learning for just the love of learning and that is what Byju’s wants to change,” said Byju.

Starting from teaching at large auditoriums, which touched a few thousand, today Byju’s has an app which has over eight million downloads and has over 400,000 paid users.

Speaking about the growth of their journey, Byju’s said,

“I would teach my friends in sessions. They knew I had a knack of cracking exams. I would bunk most of my classes as I was good at sports. My friends would take my help in clearing exams like CAT, GRE, GMAT, and other competitive exams.”

But Byju’s had bigger plans, and started booking auditorium and stadiums and started teaching students a subject he personally loves – mathematics. In 2012, he started video modules and in August 2015, the team went the app way.

Byju added that today’s app launch is a step closer towards touching a one-on-one experience. Last year, Byju raised $140 million in three rounds from top investors, including $75 million from Sequoia Capital and Sofina in April, a $50-million round led by the Chan-Zuckerberg initiative (existing investors and others also participated in the round), and another $15 million from IFC, a financial institution that’s part of the World Bank group, in December. The latest round of funding has pushed Byju’s valuation up to around $500 million from $160 million in 2015.

In a conversation with YourStory, Byju said that they expect to grow at the rate of 2.5X in 2017. Byju also claimed that the paid version of their app has a close to 90 percent retention rate. The retention rate is for annual subscriptions.

Currently, Byju’s looking aggressively to push internationally. While Byju admitted that their technology and app still is a little behind what is available in advanced economies, they nevertheless believe that this space can be captured easily.

They have a strong content development team of 500 members and no part of the video development work, including the background music, is outsourced. Byju’s has also acquired several startups and according to several reports, it will also be acquiring TutorVista and Edurite.

“We are looking at acquiring a few edtech startups in the international markets as a way of entry, but we cannot disclose the names of those startups,” answered Byju. In a conversation with YourStory, an ex-employee has also said – “No other edtech startup globally has been able to crack a revenue model like Byju’s has.”

Byju’s acquihire strategy involves being in the game of the entire edtech spectrum. In terms of entering the international markets, Byju added that the product will essentially be the same with minor tweaks.