It’s official, you can now get everything online, even funding for your startup 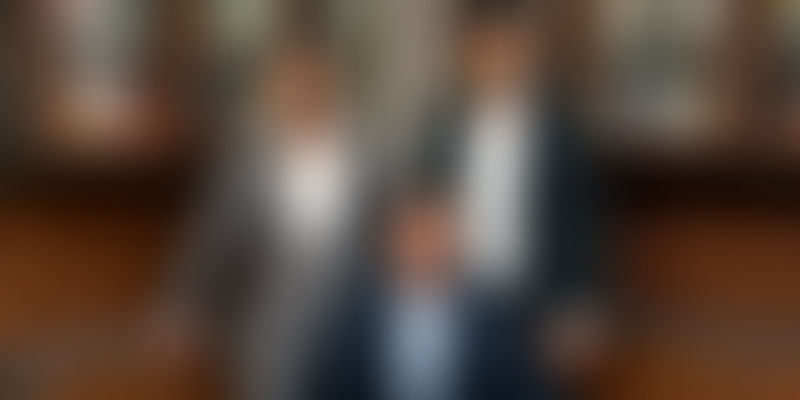 In India, there are more than 50 million MSMEs that require more than Rs 32,00,000 crore of funding. However, the current banking systems have been able to penetrate only Rs 7,00,000 crore, and three-fourths of it still needs to be brought into the banking ambit. This gap is right where CapitaWorld, backed by technology, has lodged itself as a nexus.

Jinand, 33, holds a CA and CFA combination, and has clocked stints in finance, manufacturing, ports and infrastructure, as well as service. Fifty-nine-year-old Vinod’s experience also spans venture funding, NBFCs, incubation, funds, and infrastructure. The veteran has served on the boards of various corporates, and even took the strategic advisory position for promoters of mid- and large-scale corporates like Nirma, Mudra Communications, and Intellecap.

Finally, Aviruk, 33, is a techie who has worked at SAIL’s Bokaro steel plant, Volvo’s manufacturing unit in Bengaluru, and ICICI Bank. He has also worked as a financial advisor to Stein and Partners in Dusseldorf, and has been a lecturer in engineering and economics at the Ruhr/Government University in Germany.

After completing his CA in 2005, Jinand, who was raised among businessmen, briefly worked in BPCL and then returned to Ahmedabad to lead a team at Kunte & Modha, owned by Vinod. The, two bonded over their love for problem-solving, and when a gap in their own industry revealed itself, the duo decided to address it.

As most big-ticket business deals take place in financial centres like Mumbai and Delhi, there is a lack of opportunity for worthy entrepreneurs from Tier-II, III, and IV cities. Explains Jinand,

“It takes a lot of time for the young talent to establish relationships with banks and NBFCs for discussing finance proposals. Besides, they tend to have little awareness and education of new products offered by the institutions. Therefore, they are always deprived of the best deals available in the market and getting funding at the right time.”

The eureka moment came in October 2014, when their team started devising an action plan on the digitisation of the complete ecosystem. In March 2015, a formal company was incorporated, now known as CapitaWorld.

With banks and NBFCs as their main clients, CapitaWorld designs technology to meet their data requirements, helping them take credit calls for disbursement. “We get commission from the banks and NBFCs, and we do not currently charge the end customers,” Jinand states.

The pain points and CapitaWorld’s spin on them

Today, it takes anywhere between two and three weeks for a banker to collect data and authenticate the same prior to taking the proposal ahead. Further, a customer finds it difficult to adhere to different banks’ various formats. So, CapitaWorld has designed only one form, with a simple interface, which then gets converted into the format the banker wants. This demystifies the process for the customer, and the banks have to do nothing differently to get their information to take credit calls.

In fact, the limitation of credit managers in processing deals means the best and most secure deals are processed first, and others are mostly not processed at all. So, CapitaWorld made a machine learning algorithm that can take decisions like a credit manager. They can assist the credit manager to take calls on deals that are considered of critical value. Standard deals can be accepted or rejected directly by the algorithms. Says Jinand,

“These algorithms are self-learning and they improve with each iteration. Algorithms are the future of banking and they are the only choice to ensure faster and accurate loan processing by the banks, digitally and penetrating deeper into Indian markets.”

Also, since the the trend of utilising banking for all transactions has set in after demonetisation, CapitaWorld ensures that most businesses get to enhance their banking limits with around six months of banking records.

Besides, entrepreneurs spend three–five months in finding a bank to fund their businesses, and most people in India belong to the lower and middle segment and normally do not know banking processes to buy homes and borrow for personal requirements. So, they end up either delaying this process or borrowing from informal markets at interest rates as high as two–five percent per month. CapitaWorld aggregates multiple options and even their in-house finance person or CA/CS can get them funds easily.

“For individuals who are not well educated, we have various business partners who help them collate their data and educate them on the multiple options available,” says Jinand.

A virtual tour of the platform

Their system has three interfaces. Fund seekers can create their own profile and have their own personalised ecosystem to get funded for the first time, and keep adding applications as needed. The fund providers’ own interface allows them to select their products and parameters. The deals get filtered and they can download the data of fund seekers registered in the systems. There are also service providers, professionals such as CAs, CS’, MBAs, ex-bankers, or investment bankers who have multiple clients and want to raise funds for their clients as well.

Currently, they have more than 20 fund providers, more than 250 service providers (after which they capped registrations), and more than 250 deals running on the platform. “Our next version will go live by the end of May 2017 after which there will be integration with multiple authentication databases for user authenticity and data autofill features,” he reveals.

Their beta was launched in October 2016 for testing with various banks and NBFC users, and went live with their first version in January 2017. A strong digital presence as well as tie-ups with multiple professionals showcasing their technology got them this initial traction.

They sat down with the highest levels in the banking system due to the calibre of the technology they built, and bagged the second spot on the top 10 Banking Applications list released by IDRBT—the RBI’s banking technology arm. They were the only private company competing with nine other banks.

Capitalising on the scope

The potential is palpable, as 70 percent of MSMEs do not have bank finance and therefore, providing them with the technology to reach out to banks will be a welcome disruption in the MSME banking segment.

“We let local intermediaries connect with multiple options and not just strike up a relationship with a single bank. This will change the complete intermediary local model that currently is driven by physical bank relationship model,” he opines.

“Many players generate leads and submit to banks to process the same. However, our systems cover the whole banking process through digitisation,” Jinand adds.

Bolstered by an angel round, they expanded from Ahmedabad, where they started, to Surat, Rajkot, and Baroda. By the end of May, they intend to cover all of Gujarat and July onwards will be targeting key cities in Maharashtra.