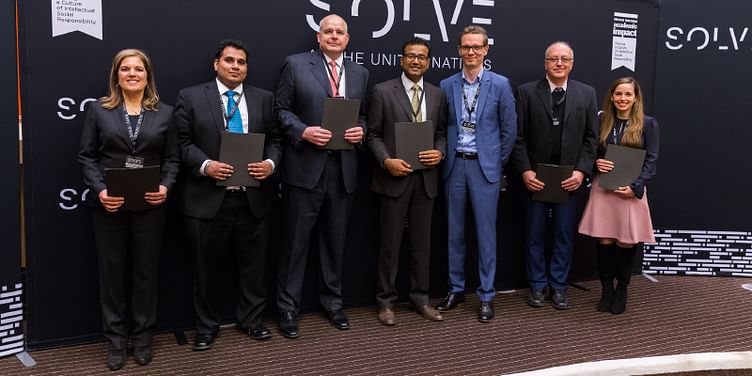 The rise of tech businesses in India is changing how people shop, eat, and travel. The fact that sacks of dollars had to be pumped into them to subsidise and create a market says a lot about how difficult it is to change consumer behaviour.

This bootstrapped startup decided it was better and easier to change technology than change human behaviour.

Randeep Singh, Pawan Jain, and Shailesh Prithani, the three co-founders of InformDS, a healthcare informatics company, were deeply anguished with the apathy of the healthcare community towards maintaining data. “The government wants digitisation, but the process is anything but simple,” says Randeep, Co-founder, Chief Scientist & Head of Products.

If precision medicine (customising healthcare using data and analytics) is to take hold in the country, the base layer has to be captured digitally. The clinical documentation and Electronic Medical Records (EMR) layers are broken. “Unfortunately, data doesn’t even exist today in India and many other countries. Even if it does, it is inaccurate, incomplete, and fragmented. And the big missing piece is the doctors' notes, which does not exist in digital format anywhere,” he adds.

The three IIT alumni went back to the basics and came up with a simple yet efficient way to digistise documentation. They let the doctor carry on with her age-old practice of using a pen and paper to write prescriptions. No fumbling with keyboards and no tapping on tabs while they are talking to patients.

On an average, a doctor gets a minimum of fewer than five minutes per patient. And if in that time she is more concerned about using the electronic devices than looking at the patient then she loses their trust.

But how was this a solution to digitisation?

Pen mightier than a tab

These are no ordinary pen and paper. The team substituted the regular ones with a digital pen and an encoded paper. This serves a dual purpose -- it not only becomes an intuitive way to capture the data digitally but also helps the patient get her health records in a safe and secure way.

Doxper Blu is the doctor side of the app that allows doctors to record and keep all their patients' prescriptions, case histories, special forms, and reports using digital pens and papers. The patient side of the app, Doxper, provides patients the access to their prescriptions in a digital format enabling the ecosystem. Patients can create their entire medical history and are able to share the same with relevant care providers. “We digitise and perform analytics on the captured data in a seamless manner. Doxper Blu is available both for iOS and Android. The captured data can be easily integrated with existing HIS/EMR/EHRs,” informs Shailesh, Co-founder & CEO.

“The doctor’s responsibility is to take care of patients. Digitising the data is not her headache,” adds Randeep.

The team took a Korean-made digital pen and customised it to suit their needs. An otherwise ordinary looking pen, there’s a video camera at the base of its nib. A micro USB connector is present at the bottom to charge the pen, like a mobile phone. The paper is encoded and when the doctor writes with the digital pen on this paper, it automatically records the information, andsorts the data by the patient’s name and date using Doxper’s proprietary algorithms that convert handwriting into text format.

The doctor and patient are connected via the Doxper’s app that retrieves the sorted data from the Doxper server.

“After testing various solutions and discussing with doctors over the past two years, we realised that it's very difficult to change a doctor's behavior and that is a primary reason for the lack of acceptance of EMRs in India. We realised that recording healthcare data without altering a doctor’s clinical workflow was a big problem, and wanted to create a solution which could be a huge value in multiple domains,” adds Sailesh.

Why should doctors pay?

What is the value proposition that Doxper proposes to doctors, who are constantly bombarded by freebies by the pharma industry? "Instead of first approaching general practitioners, we decided to go to specialists and super-specialists. They deal with chronic diseases like cancer, heart diseases, and such, and need to maintain regular records of their patients who keep coming back to them," answers Randeep.

At present, the team has 300 doctors on board who are using the Doxper service. It comes as an annual subscription of Rs 15,000, plus extra charges for the paper. Says Randeep,

“We have three services rolled into one -- we are stationery partners, we also become the data storage partners, and the third is the mini EMR service that we provide, which is storing and retrieving patient data in a better way.”

“We have also signed contracts with a few big partners in healthcare domain (insurance, data analytics etc.) who are taking Doxper to many doctors and clinics,” adds Shailesh.

For instance, Anganwadi workers have been provided with these pens and paper by the Biocon Foundation, a partner of Doxper. Life becomes simple for these health workers because they do not have to additionally worry about the safety of hi-tech devices that are otherwise needed for collecting data electronically. “The pen is safe even if it falls accidentally,” says Randeep.

Doxper won the prestigious SOLVE challenge hosted by MIT, US, which is an initiative for ‘Solving the world’s most pressing challenges through open innovation and partnership.’ The Doxper team also won a challenge at the United Nations in New York in March this year from among 150 applicants from around the world.

The three co-founders have a background in healthcare analytics and technology. Randeep was Pawan’s senior in IIT Bombay. The two met Shailesh, an alumnus of IIT Roorkee, through common friends. Shailesh, a sales and management professional, belongs to a family of doctors and he too was working on a PHR (Patient Health Record) system for chronic diseases and emergency use-cases.

The three had a shared vision and complementary skills, and joined hands to found Doxper in mid-2015.

The startup has so far analysed a few million prescriptions all over India. “This data can help us visualise patterns and predict outcomes. For example, before an epidemic like dengue, swine flu etc., breaks out, we can tell a particular administration there are chances of their areas being affected,” explains Randeep, adding, “This is healthcare informatics at scale.”

Interestingly, Randeep mentions that whenever they have approached VCs, they have been asked if there is a similar model in the US? “How can there be? This is not their (US) problem,” he states.

However, the team is hopeful of raising funding soon. "Right now, we are only looking at OPD, but we want to get into IPD (in-patient care), ICU. There are a lot of things in the hospital where the pen hits the paper, and we want to be there," says Randeep.

In their bid to establish standards of care, they are proving that good patient care starts with good documentation.