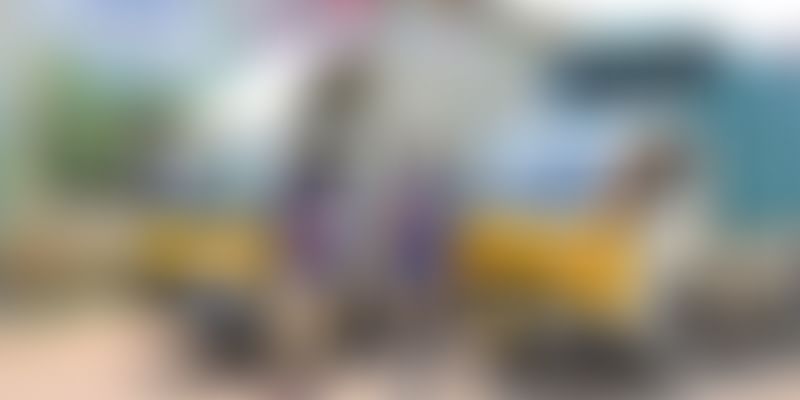 M&M-incubated company SmartShift has become the data point for the group to understand the evolution of trucking in the era of GST.

Bengaluru-resident K.C. Devaiah has built a successful business in tiles through sheer sweat and toil. Started five years ago, his tile shop on Bannerghatta Road today has an annual turnover of Rs 6 crore, thanks largely to the tie-ups with real estate contractors in south Bengaluru for supply of tiles for their housing projects.

However, transportation was one area over which he had no control. Every time he received an order to deliver tiles, he would have to call a transporter, who, besides charging him a flat rate of Rs 1,200 for ferrying one tonne of cargo within a 10-km range, would make the delivery according to his own convenience.

But thanks to an application provided by SmartShift, he now has truckers bidding competitively to win business from him. “I could suddenly see the rates drop by 40 percent, and I could keep the customer happy because the trucker would deliver the load on time,” says Devaiah, owner of Sannidhi Enterprises.

This real-time demand aggregation between transporters and businesses happens on an intelligent engine powered by SmartShift, a logistics technology company incubated by Mahindra & Mahindra (M&M) Group.

When Kausalya Nandakumar, a senior management executive at the M&M Group, took a transporter and a small and medium business (SMB) aggregator model to the company’s board in 2014, they asked her how different this business was from companies like Rivigo and Blackbuck. Kausalya told the board that the business would focus on transporters with trucks with tonnage of less than five tonnes on one hand, small-scale businesses with turnover of less than Rs 10 crore on the other.

Today, Kausalya’s company SmartShift, incubated by M&M, boasts of 3,500 transport partners and over 12,000 businesses across Hyderabad, Mumbai and Bengaluru, with Mumbai contributing the largest chunk of its business. It clocks approximately 1,200 transactions a day, and is now geared towards creating a community of one million stakeholders over the next three years.

“We have solved this for people who are on feature phones. There is zero complication for the trucker and retailer. All that the trucker has to do is to make offers on the retailer’s quoted price,” says Kausalya. She is however, not ready yet to share investment and financial details.

Kausalya plans to launch in Ahmedabad and three other cities by the end of the financial year 2017-18.

But not everyone is gung-ho about the million stakeholders target. “Several transport aggregators tried to solve two disorganised ecosystems and found it very difficult,” says Anish Basu Roy, Co-founder of Shotang. He adds that, for this business to work, it could take a decade of changing mindsets.

Truckers and other challenges

Babajan owns a Tata Ace and was until now logging two short trips a day earning Rs 1,000. After apportioning for EMI and maintenance costs, he was saving Rs 300. With SmartShift, he is now able to plan trips by the region he serves by connecting with SMBs close to the delivery or pick-up vicinity, which means additional trips.

“I earn an additional Rs 500 a day thanks to SmartShift, and that goes directly towards my household expenses,” says 49-year-old Babajan, who owns a single truck.

According to the India Brand Equity Foundation (IBEF), the logistics industry in India is pegged at $130 billion, with 35-40 percent of that number representing the intra-city space. SmartShift estimates that 18 lakh small commercial vehicles complete millions of transactions daily across the country.

Kausalya says the company will focus on maintaining customer relations, and making sure that customer queries are promptly addressed and that technology is made use of regularly.

Bengaluru-based Sunil and Manjunath, brothers in their late forties, are among the people Kausalya and SmartShift are looking to serve. The duo owns four small trucks, and expects to see each truck complete at least 10 trips in a day. “We have been in the FMCG distribution business for 20 years now, and although these sub-one-tonne trucks make sense to serve the city, you cannot keep them idle because these have been purchased on loans,” says Manjunath.

SmartShift has helped the brothers achieve ten trips per vehicle, and make around Rs 150,000 a month between all four trucks, with Rs 45,000 going into their savings.

SmartShift is offering several benefits to truckers including discounts on fuel and additives. It is looking to provide working capital loans to SMBs and these truckers.

The company is also preparing a road map to raise a large round of funding from investors. But Kausalya knows very well that the unit economics has to work out for both the truckers and the SMBs to make her business thrive, since a small percentage is charged on both parties by SmartShift.

What's in it for the M&M Group? With the commercial vehicle business being a priority for the group, they need the data to understand the dynamics that made the Tatas dominate the large and small truck business. That will possibly show them the way to understand the minds of their customers and the evolution of the hub and spoke model in the cities.

“Especially now, with GST, there will be large warehouses that will serve several businesses as small hubs across cities in India. Data then becomes the gold mine to understand where the next phase of growth will come from for large consumer companies,” says Vikas Lachhwani, Co-founder of MCaffeine, a skincare brand and FMCG company.

So, Kausalya certainly seems to have her bets in the right place. Only time will tell if truckers and SMBs will work together in consistent harmony with SmartShift.