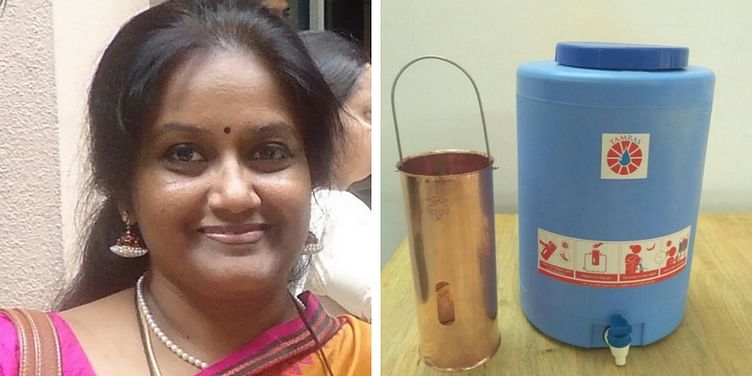 TamRas is a water purifier which aims to address the biggest cause of under 5 years mortality rate in India -diarrhea- by providing clean and safe drinking water.

Padma Venkat, 53, and her team of researchers at Transdisciplinary University (TDU), Bengaluru, have worked on ways to develop a low-cost water purifier that can be accessible to low income groups. According to the World Health Organisation (WHO), over 1.8 million people consume contaminated drinking water, and an effective solution to this could reduce the number by over 45 percent. Every day, 4,000 children die of diarrhoea globally; one out of these five children is an Indian.

The idea and research

Based on the appalling statistic that diarrhea, a water-borne disease, is the leading cause of death from consuming contaminated drinking water among children in developing countries, Padma thought that there was a need to build a sustainable and affordable product that could curb the problem. “Safe drinking water is a huge problem in India, we don’t have a solution that is sustainable. All kinds of technologically advanced solutions exist, however these solutions are not able to reach the segment that requires it the most,” says Padma.

The idea for TamRas comes from the traditional Indian practice of storing water in copper or silver containers. The Foundation for Revitalization of Local Health Traditions focusses on the Indian medical heritage, so I thought about how these methods could be leveraged for affordable heathcare solutions,” she says.

“Ayurveda texts mention how copper is good for the health. Even today we know that copper is an essential micro-element needed for various physiological functions of the human body. So a little bit of copper that is leached into the water during the purification process is good,” she adds.

Once the research was complete, she and her team took the product for field tests with the help of the Grand Challenges Canada grant and with assistance from professors of McGill University. These tests were carried out in Kenya and India to demonstrate the anti-rotavirus and anti-bacterial effects of copper. It was found that there was a significant drop in the bacterial count in the water. Additionally, they also monitored the diarrheal incidents in Kenya and found out that the number of children under 5 years of age affected by diarrhea went down by 37 percent.

This research has been published in over three leading science journals since then.

How the purifier works

The water purifier consists of a 15-litre copper vessel that can purify water in eight to 10 hours. The cost of each unit is Rs 1,500, which is lesser than other commercially built purifiers in the market. Even if one buys a copper pot, it would cost them no less than Rs 4,000 for something with a capacity of 15 litres. Copper, because of its anti-bacterial properties, kills any disease causing bacteria and pathogens, making the water safe for drinking.

“The purifier does not require any fuel or electricity to run and does not have any recurring expense. For maintenance, only the copper pot needs to be cleaned, just like any other kitchen utensil. Where an RO water purifier will cost upwards of Rs 8,000 with recurring expenditure, for households TamRas is an economical option,” says Padma.

Additionally, for individuals who cannot pay Rs 1,500 in one go, an EMI option is also available. “The only limitation of TamRas is that it only targets microbial contamination, it cannot remove physical and chemical impurities,” adds Padma.

The current phase of funding for TamRas is coming from the Tata Trust. After this round of funding gets exhausted, TamRas wants to follow a direct sale model where people from within the community will be trained to become social entrepreneurs. The product will be taken directly to the people since some villages are situated in interior spaces, which makes it difficult to reach out to them through conventional methods.

TamRas has partnered with various NGOs that will help them identify these entrepreneurs and train them accordingly. About 25-30 of these social entrepreneurs are currently being deployed in the three areas where TamRas wants to reach out: Raichur, HD Kote and MM Hills. These social entrepreneurs will not only help in selling the product but will also make the people residing in the rural areas aware about the importance of consuming clean drinking water.

Currently, the purifier units are being manufactured by a Coimbatore-based startup. However, to make the model sustainable some incentives will be given to the social entrepreneurs so that they continue to market the product after Padma and her team are out of the picture.

Balakrishnan, 51, is the vice-chancellor of TDU and got involved with the project around two months back and is taking care of the branding and launching of the project in various markets. “We have received orders for around 6,000 units from local people in Chhattisgarh after the launch in May,” he adds.

According to Padma the greatest challenge was to bring the technology to the land. “One has to persevere to bring the invention to the masses. There are so many components to this, from communicating with various stakeholders, branding, logo to product design and aesthetics. It is a summation of many disciplines that I as a scientist got to deal with,” she adds.

For Balakrishna, the challenges have been with regard to making sure enough units of the product are available. He is also excited about getting the product to sell on e-commerce websites like Flipkart and Amazon.

“Neither is this a commercial venture nor are we depending on a subsidy from the government for putting the product out in the market. We are trying to look at a unique marketing model,” he adds.

For now, Padma and her team want to see how well the product sustains itself in the slum environment. She plans to work in the slums of Kolkata where the problem of cholera and diarrhea is perennial.

“Like one brushes their teeth everyday as a practice, having access to clean drinking water should also become a normal practice,” she remarks.