India' growth to slow down to 6.8pc in 2016-17 because of demonetisation: World Bank 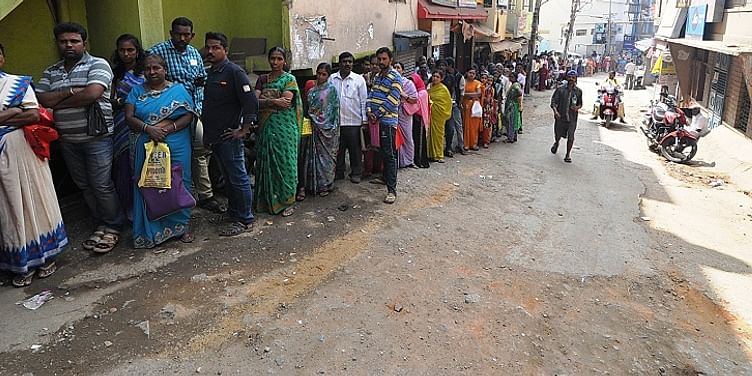 A modest slowdown is expected in India's growth with the GDP expected to fall to 6.8 percent in 2016-17 as a result of the temporary disruption caused by the government's demonetisation initiative, the World Bank said on Monday, May 29.

"India's economy was slowing down in early 2016-17, until the favorable monsoon started lifting the economy, but the recovery was temporarily disrupted by the government's demonetisation initiative. As a result, a modest slowdown is expected in the GDP growth in 2016-2017 to 6.8 percent," World Bank said in its bi-annual India Development Update released here.

"Demonetisation caused an immediate cash crunch, and activity in cash reliant sectors was affected. GDP growth slowed to 7.0 percent year-on-year during the third quarter of 2016-2017 from 7.3 percent in the first quarter," it said.

While limited data is available, demonetisation may have had a disproportionate impact on poorer households, which are more likely to work in construction and informal retail, the report noted.

"Greater data availability, especially on labor markets, is needed to better gauge the social impact of policies in the future," it said.

"Despite this, there was a relatively modest slowdown in the economy."

The report attributes it to coping mechanisms, including greater usage of digital transactions, higher rural incomes, and robust public consumption. The pick-up in rural wages in November and December, 2016, and the growth of agricultural output suggests the positive impact of the monsoons substantially dampened the disruption from demonetisation.

The report said that demonetisation has the potential to accelerate the formalisation of the economy in the long-term leading to higher tax collections and greater digital financial inclusion.

The World Bank also noted that India remained the fastest growing economy in the world with strong economic fundamentals and ongoing reform momentum.

"India remains the fastest growing economy in the world and it will get a big boost from its approach to GST which will reduce the cost of doing business for firms, and reduce logistics costs of moving goods across states, while ensuring no loss in equity," said Junaid Ahmad, World Bank Country Director in India.

The implementation of Goods and Services Tax (GST) could also be a complementary reform that will support formalisation, as firms have a strong incentive to register with GST to obtain input tax credits, the report said.

"GST is on track for implementation in the second quarter of the fiscal year and is expected to yield substantial growth dividends from higher efficiencies and raise more revenues in the long term.

"Timely and smooth implementation of landmark reforms such as the GST and a new code to deal with bankruptcies, as well as decisive action to resolve the non-performing assets (NPAs) challenge of public sector banks is crucial to enhance the economy's potential growth," the report added.

"Private investment growth continues to face several impediments in the form of excess capacity, regulatory and policy challenges, and corporate debt overhang. However, the recent push to increase infrastructure spending and to accelerate structural reforms will eventually drive a sustained rebound of private investments," said Frederico Gil Sander, Senior Country Economist and the main author of the India Development Update.

While agriculture growth delivered in 2016-2017, the report notes that investment growth remains subdued, partly because of banking sector stress.

The report also highlights the low and falling participation of women in the labour market.

"For India to achieve higher growth, it needs to create safe, flexible and well-paying jobs for a large number of women who are currently not in the labour market."