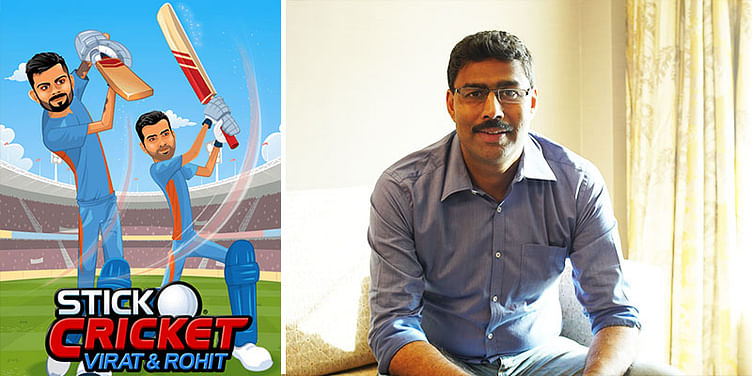 Nazara Technologies recently partnered with Stick Sports to launch Stick Cricket featuring Indian cricketers Virat Kohli and Rohit Sharma. Here is a review of the game and an overview of Nazara's plans for 2017.

While all the panelists had games in different niches and slightly different best practices on how to keep users engaged and earn revenue, they agreed that monetising the Indian customer base is a challenge. But the scenario has become a little easier since demonetisation and the arrival of Reliance Jio. (More on the panel discussion in a separate post.) Users are now more accustomed to digital transactions, and lower data plans have made revenue models like ‘rewarded video’ easier to leverage.

Talking to YourStory, Manish gave us an overview of how Nazara looks at the Indian gaming ecosystem, their recently launched game, ‘Stick Cricket Virat and Rohit’, and what they plan to do in the future. Let us explore a little more about Nazara and Stick Cricket in this week’s App Friday review.

Nazara also runs gaming subscription service across 60 countries covering Africa, Middle East, South East Asia and Indian subcontinent. Going forward they also aim to explore the e-sports market in India. As it is currently in the execution stage, Manish declined to share more details on it.

Related read: Nazara Games to invest $20M to set up an eSports league in India

Nazara is pure-play publisher and is looking for developers who wish to expand in India and other emerging markets. It aims to launch about 20 games in the next 12 months, across their three main user base areas- kids, males and females.

Talking about their belief in localised content and trends like cricket, Manish noted that a combination of IP and good game content has worked well for them. He noted,

We are the largest and fastest growing publisher in India. We see about 12 million monthly active users for our games. With Stick Cricket- Virat and Rohit, we wanted a game where two Indian batsmen would team up and play on the same side to take on different bowling attacks.

Based out of London and Sydney, Stick Sports Ltd., is an independent games developer and publisher, producing online and mobile sports games for sports fans. The first game – Stick Cricket – originally launched in 2004 was designed to be easy to pick up yet fiendishly difficult to master. Nazara recently partnered with Stick Sports to launch a Stick Cricket game featuring Indian cricketers Virat Kohli and Rohit Sharma.

The game engine has been designed to focus on the unique skills of Virat and Rohit individually and also get them to collaborate and take apart different bowling line-ups. The player must play to each batsmen’s strength, using their unique skills and abilities to help create an everlasting partnership.

How the game works and first impressions

On firing up the game for the first time, users get to see the ‘stick-like’ caricatures of Virat and Rohit padded up and with bats in hand, but without any headgear. The gameplay is fairly straightforward- users need to complete a series of mini-challenges and accumulate virtual cash in the process. The virtual currency can then be utilised in powering up specific skills for each of the players to make gameplay more balanced as we take on more advanced bowling lineups.

In terms of gameplay, the user interface is quite simple and seems to follow Virender Sehwag’s philosophy of ‘see ball, hit ball’. As the ball bounces on the pitch, users need to select one of the two directional buttons and also time their shot for best results (boundaries).

The gameplay is straightforward and simple but also has some interesting elements to it. If users do not time their shot right or point their bat in the wrong direction, the game engine ensures that the batsman on strike faces the music, in the form of funny animations.

On the other end of the spectrum, time a short to perfection and Virat and Rohit look back at the user staring at the screen and nod or wink in agreement.

As a free game, Stick Cricket heavily relies on rewarded video to monetise. This doesn’t intrude with the gameplay too much though and is included as part of the gamification. Based on my experience with the game, I found it in two key areas-

In both cases, I found myself watching the ads because it made my in-game life easier and helped me advance further in the game. The ads are generally about 20- 25 seconds in length and generally feature other games. Though I’m not a big gaming fan, I found the ads to be compelling enough to actually download and try out two of the games pitched to me.

On the whole, ‘Stick Cricket- Virat and Rohit’, provides an interesting cricket experience to both casual and die-hard fans of the sport. The gameplay experience is simple but challenging and the variety of bowling with a combination of slow, fast and even spinners keeps the engagement factor high.

You can download Stick Cricket here on Android and ioS

Related read: About the future of gaming in India