With a ‘students-first’ motto, can Udacity make ‘lifelong learning’ mainstream? 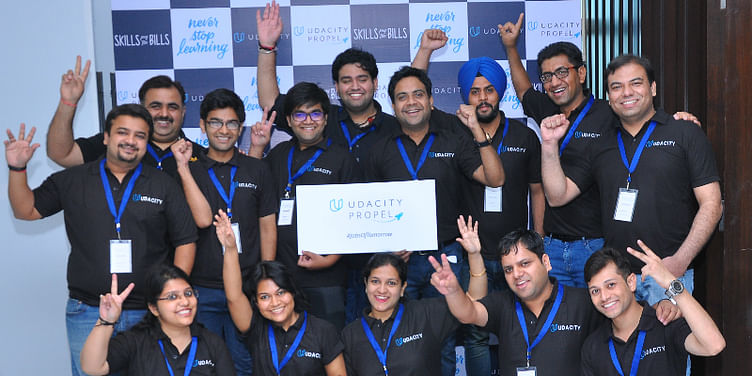 Udacity believes ‘Nanodegrees’ prepare us for the jobs of tomorrow—here’s a nano report card.

The pursuit of ‘lifelong learning’ has gone into overdrive in recent times, given the threat of automation and AI. Jobs of the future will be different from what they are today. YourStory recently caught up with Ishan Gupta, MD, Udacity India, and spoke to him about topics ranging from the future of jobs to how platforms like Udacity and its partners are working together to help people survive and thrive with the times.

A key part of Udacity's focus is democratising education across platforms from the web to its mobile app and even offline sessions and ‘hiring drives’, codenamed ‘Propel’. Here is a story about where Udacity currently stands in India and an overview of its mobile app in this week's App Friday's story.

Headquartered in Mountain View, California and with its Indian base in Bengaluru, Udacity was founded in 2012 by the trio of David Stavans, Sebastian Thrun, and Mike Sokolsky. As a massive online open course (MOOC) platform, Udacity’s first class was on artificial intelligence and the vision, as noted by Sebastian, was to transform people’s lives through education.

In October 2012, Udacity announced it global intentions by partnering with players like Google, NVIDIA, and Microsoft to provide free education online. Shortly after, the company announced that it had raised a $15 million Series A round led by Andreessen Horowitz.

Udacity then joined the unicorn club after raising a $105 million Series D round in 2015. Currently consisting of 300 employees globally, the venture has a Nanodegree programme through which it trains students for the 'jobs of tomorrow' through short self-paced courses. Now, in 2017, Udacity works with players like AT&T, Google, Facebook, Salesforce.com, and Cloudera to build technology courses designed to advance lifelong learning. Ishan noted,

We stand for the jobs of tomorrow, whether it is machine learning, virtual reality, robotics, or self-driving cars. Bengaluru is a hot market for some of these courses and sees the highest interest globally.

The global team noticed this and hence set up a small team in Bengaluru in 2015, which Ishan believes set the pace for when he joined Udacity in January 2017. The 15-member India team looks after all operational aspects and also at providing a localised learning experience. Ishan said,

While the content at the core of a Udacity course taken anywhere in the world remains the same, we aim to provide a localised experience in some of the key markets that we operate in. This could be by tweaking user flow, engaging with corporates for enterprise sales, or some add-on lectures.

Ishan also mentioned that as mobile is gaining prominence as a learning tool, they are investing heavily in their mobile app to provide a great experience in terms of content delivery. Talking about the importance of being active on mobile and the web, Ishan remarked,

Millennials will probably consume content on mobile, then go and complete their projects on their workstations.

On signing into Udacity for the first time, users can browse through a catalogue of courses or use the search bar to find a specific topic of interest. The categories range from mainstream topics like Android and iOS development to niche topics like machine learning and virtual reality. For those who are not technology-savvy, there are 15 courses labelled ‘non-tech’.

The topic, ‘How to build a startup’, grabbed my attention and I decided to learn more about it. To help learners decide, each topic includes a course summary, frequently asked questions, and also a chapter-by-chapter breakup of the syllabus covered.

The names of the instructors are prominently displayed above the course summary. I intuitively tried tapping on the names to get an overview of the instructor's background and experience but found that those boxes were static and didn’t lead to anything. Including a bio here would make for a better end-user experience, for those who don’t want to Google their instructor's name.

Once you’ve decided to take up a course, you can browse through different chapters and get an overview of the number of concepts you will be learning and the number of quizzes (if any) you need to finish.

In terms of content, I found that most of the sessions were cut down into short chunks that are easily digestible and convenient to view on either desktop or mobile devices. The most useful feature I found was the ‘download lesson’ feature, which is indicated by a downward- facing arrow above each chapter. Users can download chapters when they have access to Wi-Fi and then access them on the go.

The overall learning experience is conducive and given Udacity’s business model, users who simply want to learn can access all the chapters they desire and those who need additional guidance and want a certified degree can opt to pay for the Nanodegree.

With a slow season expected on recruitments, Udacity notes that a lot of employees in the IT sector are looking at upskilling/reskilling by gaining new skills like Android development, machine learning, etc. While most corporates have in-house training and onboarding sessions for prospective and current employees, Ishan believes there is a lot of potential for a ‘Udacity for businesses’ vertical. He noted,

Companies generally have training for very specific areas that are their secret sauce. But in most cases it doesn’t make sense for them to invest internal resources for some of the popular and generic courses. That is where a platform like Udacity can fill the gap.

Both the Indian and global education sectors are in need of an overhaul to keep pace with the current market skills needed for jobs. But because of many external and internal factors, these changes cannot be made overnight. So on being asked if Nanodegrees and similar services from other MOOC platforms like Coursera could one day replace degrees, Ishan noted,

I don’t know. But markets will define what is needed. Consumers and employers will make choices on which is more effective and required based on ROI in terms of price and time invested.

Based on his vantage point as an insider in the edtech space, Ishan sees MOOCs growing further in the next few years as the threats to jobs become more real. In terms of average age of customers, Ishan noted that the average age of US customers is higher than their Indian counterparts. He attributes this to the ambition among the Indian workforce. He said,

We see a balanced mix of young and old learners from India. People in India seem to have the hunger to learn more and achieve more compared to other markets, where people are not as ambitious, or feel content with what they have.

Ishan’s goal for Udacity India is to build a strong team, launch more India-focused courses, and take the Indian business forward. He has some prior experience in this space, having run EduKart in India, which went on to get acqui-hired by Paytm in early 2016.

You can check out all our other App Friday stories here