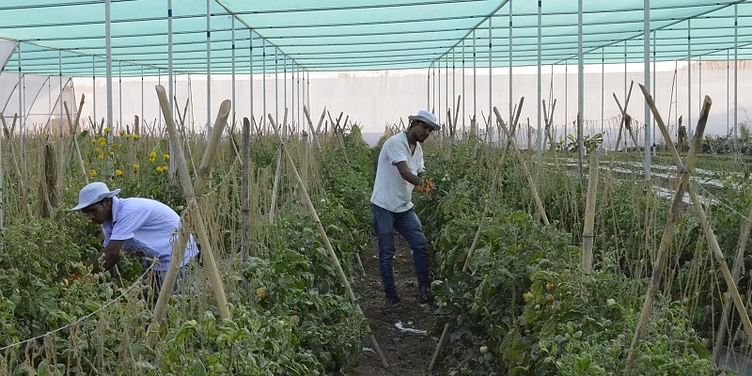 Organic’ might be ‘cool’, but Earth Food chooses to go the no-residue-farming way.

Making chemicals-free fresh fruits and vegetables available at market prices might sound unreasonable, but this Pune-based startup is proving it can be done.

From their 307 acres of land in a state infamous for droughts and farmer suicides, this one-year-old agri-tech startup (part of VTP Group) is striving to change the concept of farming. It grows a wide range of fruits and vegetables without using harmful chemical fertilisers or pesticides, which are then sold to customers without adding preservatives and synthetic food enhancers.

Nilesh Palresha, Director, VTP Group & Earth Food, says the use of pesticides, long lag between harvest and selling, transportation in unhygienic conditions, and involvement of middlemen are the problems they are trying to solve.

“People often complain about how vegetables today are no good compared to what was available 20 years ago. However, we do natural, residue-free farming and sell only what we grow.”

Earth Food has generated Rs 1 crore in revenue over the last one year and hopes to raise funding now. Planning to produce 150 tonnes per month, it is aiming for monthly revenues of Rs 1 crore in 2018.

From farm to fork

Normally, farmers hire small trucks to carry their produce to the market, bound by wholesalers’ rates because vegetables deteriorate in two days. Even then, they reach consumers only by day three.

Earth Food fruits and vegetables, on the other hand, are harvested, inspected, packed, and sent to retail outlets in AC vans on the same day. Since it has end-to-end control, vegetables reach partner retailers in five hours and are delivered to the consumer in eight hours. Efforts are on to reduce the home delivery time to four hours. Its fresh produce includes 40 vegetables like iceberg, broccoli, pokchoy, zucchini, French beans, gawar, ladies’ finger, and green chilli. Onion and potato are now being introduced.

“Our plan is to grow whatever the end user is using at home every day; we want to deliver to their homes whatever we can in that huge basket,” says Nilesh.

A mechanical engineer with an MBA, Nilesh entered his family’s 25-year-old business of cement and construction material, and started a construction business too. He entered agriculture three years ago, and Earth Food began in early 2015 with an investment of Rs 5 crore.

“Although we had money from other businesses, for Earth Food, we raised money internally and through a bank. We had a very tight budget for months,” he recollects. For the first year and a half, he did not sell anything under the Earth Food brand, taking the “normal sabziwala” route.

“What we grow must have consistent quality. Then we can sell under our brand. Once you put some chemical in the vegetable when it is sown, it is impossible to track it. If you test our vegetables, there will be zero chemicals,” he claims, adding that in the last eight–nine months, they have been on track.

Earth Food aims to get the Global Gap certificate, which is similar to ISO for fruits and vegetables; it is recognised in Europe where standards are very strict. Currently, Earth Food sells only within India, to the likes of Reliance Fresh and Nature’s Basket.

Nilesh is an investor in tech startups like Plobal Apps, Yolo Homes, Workout.case, and The Circus Works. This technology has helped Earth Food’s functioning as well, since the strategies are decided with optimal results.

The prices were decided after a 100-person survey found that the prices of organic products discourage consumers. “So we decided against calling it organic and charging a premium. Our pricing is the same as anyone else’s. We wanted to make sure the backend and supply chain were taken care of so that we need not take a premium to cover the costs. Because even if it is superior quality, a 20 percent higher charge will cause people to retract,” he says.

Earth Food goes to Mumbai and Bengaluru next. Nilesh claims that they will be able to address any geography which can be reached within eight–10 hours by road.

Nilesh believes branded vegetables are the future. “Twenty years ago there was no branded oil like Saffola; it was sold loose. Now 90 percent people are buying branded oil. Same with atta, chilli powder, haldi. But we are pioneers in branded vegetables. This market is very small today, but 20 years later, there will be many more such players,” he says. Earth Food will soon introduce chilli powder and turmeric powder too.

Online grocery retailers like Bigbasket have their own private labels (Fresho) for vegetables and fruits. They directly buy from farmers, package it under their brand, and sell. However, selling their own produce ensures that Earth Food has no competitor in Pune.

“We also deliver at the rotary club, boat club, etc. in Pune. We are now present in 12 locations here. We will be in 30–40 locations by year-end,” Nilesh notes.

The toughest issue for Earth Food was getting the right people. Nilesh says there is shortage of good talent in agriculture, and hence took a long time to get a CEO and farm head. (Their current CEO Ravindra Patil is a postgraduate in agriculture engineering and an MBA in finance with 25 years of experience in processing/agro projects globally as well as organic farming and processing projects in India.)

Other employees also have backgrounds in agriculture; some of them with master’s degrees in agriculture, or MBAs in sales and marketing. Currently, the team has 10 members and 25 labourers.

In agriculture (especially in Maharashtra), the more dependent you are on nature, the more risky it is. To be less dependent on nature requires a lot of investment. “To ensure that we will not fail if there is no water for two months, we have three water bodies— we do irrigation with two wells, one canal flowing through our land, and borewells and ensure optimal utilisation of water,” Nilesh explains. So far, they have not faced any losses despite harsh summers as their shednets cover the plants/crop.

For Nilesh, their biggest success is that although they started home delivery with 20 people, in two months it was 150 people—just by word of mouth. Earth Food currently has around 150 B2C customers, with 30–40 new ones organically coming in every month. In fact, 90 percent of orders were B2B initially; but now it is 70 percent. This is a great testimonial to their product taste and quality, and the market is wide open for them to dominate.