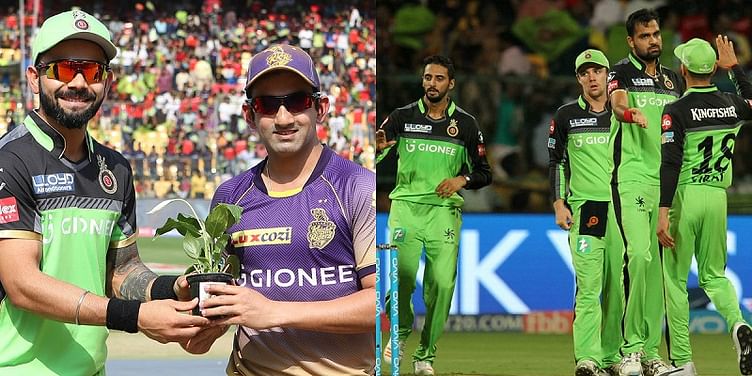 It’s been 10 years since the Indian Premiere League won the hearts of cricket fans across the world. Celebrating cricket with IPL in the months of April and May has become an annual ritual in India. This year, eight teams took over the pitch and each had its group of enthusiastic supporters.

Among all the teams, Royal Challengers Bengaluru has been one of the favourites. With Virat Kohli as its captain, the team recently won the ‘Green trophy’ for using sports as a unique platform to spread the message on environmental conservation. Royal Challengers has embarked on a journey to facilitate vital environmental responsiveness by reaching out to its fans and the public through a series of ‘Green Initiatives’. At its home ground Bengaluru, Chinnaswamy stadium became the first stadium in the country to be completely powered by solar energy. It has also built a subsurface aeration and vacuum-powered drainage system—SubAir—which can be utilized for uninterrupted matches during rains. While these few instances are a testament to the sports community’s commitment to saving the environment, Royal Challengers had already initiated such endeavours a few years ago.

In 2010, when the third edition of IPL was in full swing, the team started carpooling solutions for fans commuting to the stadium. This initiative was in collaboration with Bengaluru Metropolitan Transport and Co. (BMTC) for additional buses for the stadium and it saw a huge participation. With well-placed dry and waste bins across the stadium, waste segregation too was emphasised. In that tournament, Royal Challengers made it to the semi-finals. Next year, the team achieved carbon neutrality with over 3,000 school children and 6,000 RCB fans across Karnataka adopting tree saplings. During this time, over 500 individuals from various corporates shifted to CFLs across the state. The team played a ‘Green Match’ where the players dressed in green jerseys and exchanged saplings with the rival team, Kolkata Knight Riders. Royal Challengers also made it to the finals but lost the tournament to the Chennai Super Kings.

I am happy that RCB has been doing the it can to raise environmental awareness throughout the past many years. The Go Green initiative holds a special place in my heart as I myself, on many occasions, have advocated the planting of trees to make our city greener. I would encourage our fans to do the same and reduce, reuse, recycle.

In 2012, Royal Challengers became the first Carbon Neutral cricket team in the world through fan-driven initiatives and not the purchase of carbon credits. They also launched ‘Greenaissance’—a campaign with the objective to retain the greenery within Bengaluru with the participation of individuals, corporate entities, and communities. Through this initiative, RCB worked with the popular NDTV Coke Support-My-School campaign and planted trees in the government schools of Karnataka.

Continuing the spirit of the game, in 2013, the team sourced renewable wind power during home matches at the Chinnaswamy stadium to reduce impact on the environment—it won them the title of the ‘World’s first carbon positive cricket team’.

Following the success of these initiatives, the team changed its jersey from red to green. Speaking about this, Amrit Thomas, Chairman of RCSPL (Royal Challengers Bangalore Sports Private Ltd.) and President and Chief Marketing Officer, United Spirits Limited—a Diageo Company—said,

T20 is an exciting format that grabs eyeballs far and wide and thus provides us with the perfect platform to spread the Go Green message through the Green Match. RCB is one of the most loved T20 franchises in India and our intention is to increase levels of environmental consciousness within and outside the fan community. Every year we focus on some initiatives that can help us have a positive impact on the environment in association with our partners and this year our target was to utilise more than 200 kg of waste material and increase awareness through consumer connect initiatives.

In 2017, Royal Challengers flaunted RCB’s jersey kits which were made from recycled plastic bottles collected from fans and attendees. Over 11,000 PET bottles collected from the last T20 season were utilised. The team, in collaboration with Saahas NGO, conducted an on-ground programme to ensure that around eight to 10 tonnes of waste generated in each match underwent rigorous waste segregation process.

While the team went down in the IPL ranking this year, one cannot ignore its remarkable journey with the ‘Green Initiatives’.