What do John Lennon, Bob Dylan, Pete Seeger, and Indian Ocean have in common? 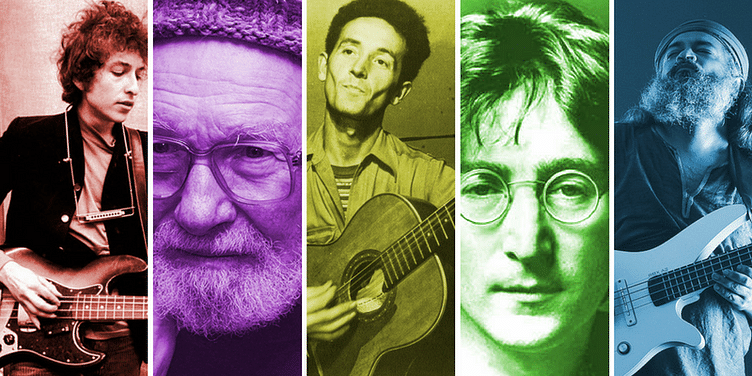 Apart from music, these iconic musicians not only inspired a generation but also shaped the world we live in, through the varying social causes they stood for.

Leonard Bernstein once beautifully said, “This will be our reply to violence: to make music more intensely, more beautifully, more devotedly than ever before.”

Often, allusions to social change have accompanied the meaning music gives to our lives. As a vessel of emotions, used to convey what we feel about social change, music has been there for us when words couldn’t suffice. Music has stepped in as a catalyst and evoked the power to inspire masses— it has numbed the pain of the fallen ones, while giving them courage to take another step. Paving its way through multiple manifestations of the creative process, music since the 1960s has changed paradigms, stirred revolutions, and inspired hope for those in need.

As Michael Tarnpoll puts it, “It made no difference if the music came from the radio, an album, or from one of the multitude of live bands that was born every day. The language, the method of delivery, and the power were always the same.”

From protest songs to American Civil Rights Movement, from democracy to LGBT rights, we bring you musicians who have inspired change through their songs and have created something much more than a pleasant sound to hear.

Right from Blowin’ in the wind, that became a Civil Rights anthem back in 1963 to his condemnation of death and destruction caused during the Vietnam war, Bob Dylan has supported social causes in spirit, serenading them by his heart-felt music with warmly laid out lyrics. Fighting for racial inequality in the Civil Rights Movement to writing about dangers of climate change and global warming, Dylan has had a very positive impact in ushering change.

Who prophesize with your pen

And keep your eyes wide

And don't speak too soon

For the wheel's still in spin”

(From- The Times They Are A-Changin’)

“A good song reminds us what we’re fighting for.” Over a career spanning 70 years, which includes a 40-year tumultuous fight for cleaning the Hudson River in the US, Pete Seeger has been a prime mover in folk revival. Often referred to as the “Singer for Social Change,” he evoked sentiments among those involved in the labour movement in the 1940-50s, infused energy in the civil-rights marches and anti-Vietnam war rallies in the 1960s, and inspired change through his environmental and anti-war causes in the 1970s and beyond.

One of the few survivors from the great singer-songwriter generation of the good old 60s in the States, Cohen was virtually the only song-writer who is also known as a poet, without his work being prefixed with the label of folk or rock. His music carries this brokenness that is central to his impact on social change. Oscillating between social order and innate psyche, his songs like the “Hallelujah” marked his famous vision of transcendence.

Guthrie wrote folksongs for the everyman, songs of personal tragedy and of triumph, ballads inspiring social change and professing ideation. He often focused on the broken world that Guthrie came up in. As Benjamin Wright says, “He wrote of a world that had already witnessed the carnage of one world war, with a second one looming, and one of US’s most troubling economic disasters.”

For all the 3,000 songs he wrote, and of which 300 were published, millions of Americans remember him for one song, which children in the US learnt in school. The song, “This Land is Your Land” seemed like the most touching connection between people living in those times. Also, the iconic statement “This machine kills fascists” on his guitar gained a lot of traction and became a settling trend.

Termed as the ‘Political Artist’, Lennon will always be remembered as a Beatle. But what seems disturbing is posterity’s lack of knowledge about how in his short life, John Lennon changed the world, beyond thrilling generations with his heartfelt music. Lennon was key to stoking public opinion against the war in Vietnam and his song “Imagine” became an international anthem for peace.

Often termed as unabashedly Indian, this folk-rock band has always been in its element while creating quirky songs with deep insights over societal changes. The best part being the connection they are able to establish, especially with the youngsters.

As Rahul Ram once said to the crowd, “I know you are well-behaved people. But, you don’t have to be. Because, we are not.” From playing songs that promoted the ‘Narmada Bachao Andolan’ campaign to talking about Anti-Nuclear movements, the Indian Ocean’s blatant lyrics with beautiful melody have been able to influence the younger generation in positive ways.