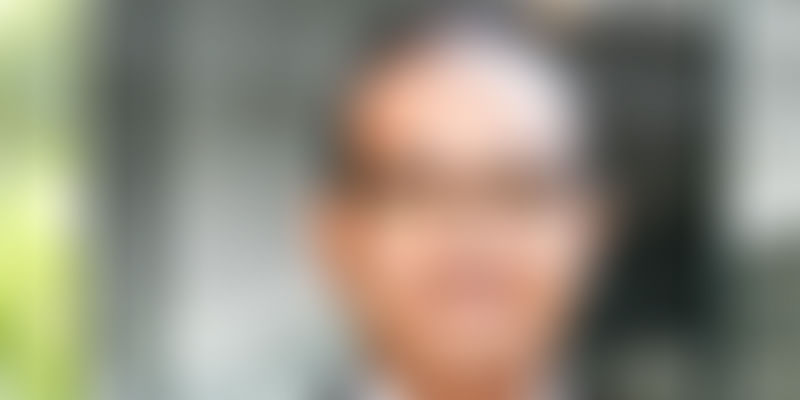 Some leaders are a product of astounding skill, and some are a product of pragmatic decisions—very rarely, however, does one see a leader who is the amalgamation of both. But Keshav Murugesh has a knack for defying the odds. After all, his grand showcase of the above was in the backdrop of two failing institutions that today have not only been revived, but have also been catapulted to the top of their respective industries.

Meet Keshav, who has been turning personal and professional fortunes around for nearly 30 years.

The share bazaar’s enthralling grind stopped the 54-year-old in his tracks when he was still a student. While studying chartered accountancy, he doubled up as a sub-broker advising friends and members of his cricket club on the share market with his firm grasp on the movement of stocks. Saving enough from the 1.5 percent brokerage he would earn, he, in turn, started investing in the shares of ITC. “I started getting ITC’s annual reports that I read copiously—a practice that played a critical role in fetching me a job at the company later,” he reveals.

He joined ITC in 1989 and stayed with the organisation for 13 long years till 2002, where he rose to the position of General Manager, Treasury Group (investments and diversification group), which created businesses across financial services, agri-businesses, and international trading.

The start of a legendary career

His first innovation early on in his career was a behind-the-scenes project that created substantial profit for one of ITC’s companies in an innovative stock transaction. “I engineered the profit without putting in any company money as the profit crystallised very quickly. And for this, my boss bought me a small gold medal with his personal money. That was perhaps the best leadership lesson for me—recognising people for the good work they do goes a long way,” he recounts.

He also believes one must never give up a well-researched idea without a fight. “I regret not pushing my point of view with my first boss at ITC when he talked me out of investing in the IT business or the soap business—we had recommended them as great opportunities for the company,” he says.

It was several years later that ITC decided to enter these markets, which now, it leads.

He was instrumental in creating ITC Infotech, a subsidiary company of ITC, out of a small information services division based on the vision of the ITC board. He also spearheaded the merger of two international companies in the US and the UK into this company. “I was closely involved in the growth strategies of ITC Infotech, including its headcount growth to 4,000 people, CMMI level rating five in the first year, and the creation of a BPO joint venture.

Besides ITC Infotech, he also played an integral part in the creation of businesses across financial services, including Classic Finance and ITC Threadneedle Asset Management, agri-businesses, international trading, the market-leading brand Sundrop oil, and real estate.

Having his work cut out for him

After a rather illustrious stint at ITC, he switched to Syntel which was dead in the water at the time. Keshav took three major decisions that pulled it out of its stupor.

First, he decided to create a BPO arm which turned around the company. The second was to change the talent management philosophy of the company, and broaden its horizon beyond sales and marketing. With the new talent, Syntel launched knowledge process outsourcing which in three years was contributing to 20 percent of Syntel’s revenue with industry-leading margins.

Third, he focused on increasing sales and margins, and transitioned the delivery model from a predominantly on-site one to a global model with more work being done offshore from the company's India-based centres.

All these efforts led to Syntel being named by Fortune as one of the 100 fastest-growing small companies in the world. All satisfied with his eight-year stint, Keshav, at that point of time, believed that his work there was done. He turned WNS-ward, to help yet another sinking ship stay afloat as it was on the verge of being sold out when he joined it in 2010.

“It was the turnaround instinct in me, following the Syntel experience. WNS had a strong lineage, having been a captive of British Airways, and had a robust roster of clients. It needed leadership for a new strategic and performance orientation,” he explains.

A task for some, but a rush for Keshav

These challenges have always excited Keshav. One of his immediate focus areas after joining WNS was to chalk out a new corporate strategy and diversify—he had seen that BPM market was moving beyond staple outsourcing solutions around finance and accounting, or payroll services.

“Global organisations were looking for strategic support in services that were the core of their industry. It meant that BPM partners had to enhance their capabilities and build more industry and domain expertise,” he explains.

Taking this opportunity head on, he spearheaded the re-structuring of WNS into a company whose services would be tailored to meet the specific requirements of each client’s industry —a pioneering move at that time.

“There was no experience to learn from. We were the first in the BPM industry to make this move. In my opinion, to always remember that the client is the only reason a company exists would hold you in good stead,” he says.

But creating industry-specific BPM services was just half the battle won. To be a true vertical player, they had to acquire and nurture talent in those industry verticals. Accomplishing that additional hurdle with flair—today, WNS has in fact earned the distinction of not only employing highly talented people but also creating industry-relevant talent through its in-house training programmes.

“This has been possible due to a decision I made early on to nurture industry domain skills in-house—through domain-knowledge based modules called The Gateway, for sectors like Travel and Leisure, Banking and Finacial Services, Healthcare, Insurance, and Shipping & Logistics. We’re turning thousands of WNS employees from generalists to specialists,” he explains.

Under his tutelage, WNS’ net revenue for fiscal 2017 stands at $578.4 million, and has been up by 8.9 percent year-on-year and 15.8 percent on a “constant currency” basis—with adjusted operating margins at 19.4 percent. “We believe that both these metrics are among the highest in the BPM industry. While the industry revised its annual guidance, WNS posted double-digit growth,” says Keshav.

WNS completed three acquisitions out of which two were in the US—Value Edge, for $17 million, Denali Sourcing, a US-based global sourcing company for $40 million, and HealthHelp, a $95-million deal. Their global headcount stands at 33,968 across 45 delivery centres in 13 countries. There has also been a dramatic growth in their market cap from $8 per share in the year 2011 to $34 as on date. This is more than a four-fold spike, amounting to $1.7 billion; something he also pulled off at Syntel, taking it from $300 million to $3.5 billion of market cap.

Right now, Keshav is rather excited about the re-branding work he is doing in the BPM industry in his capacity as the NASSCOM BPM Council Chairperson. His work has repositioned the industry as a strategic partner to global organisations.

“My next focus area is on education initiatives as a part of my responsibilities as Chairman, CII Western Region Education Sub-committee. My mandate is to work closely with the industry to introduce industry-ready academic curriculum—to contribute immensely towards building India 2050,” he says.