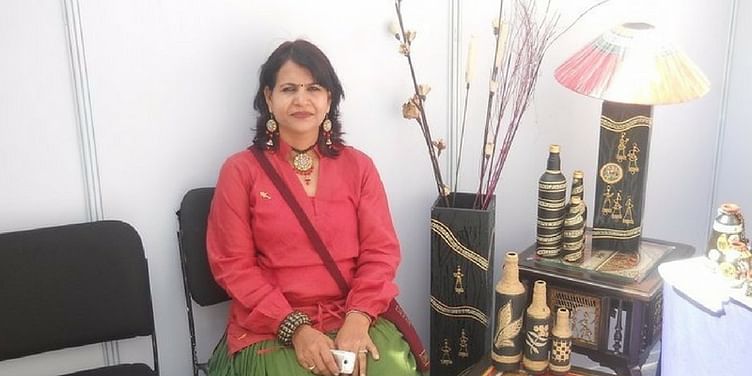 Suman Sonthalia is a successful entrepreneur in her own right but the journey has been anything but easy. She not only had to work hard with determination and nurture her innate talent, but also overcome obstacles of all kinds. As the founder of Sahibabad-based Aakriti Art Creations, she helps women who are dependent on their husbands for monetary aid.

When Suman started Aakriti Art Creations, she did so with a desire to help such women. She went from one alley to another in search of such women. The women whom she found were earlier working as maids or nannies or were employed in some other odd job.

Born in a conservative Marwari family in Kolkata where girls sometimes have to give up their dreams due to lack of opportunities, art was very remote for her. But she never gave up and kept working on her art till opportunity came knocking at her door in the guise of her husband, BB. Santholia, an iron merchant and a trader. While talking about this, she says,

The formative years for Aakriti Art Creations were only about painting Warli art and selling them at various cottage stores. But my husband BB Sonthalia took deep interest in my art and encouraged me to pursue it.

Suman’s Skill India Training Centre, situated in the industrial city Sahibabad in the national capital region, designs different types of handicraft that have worldwide demand. The designers here are mostly women and a few of them suffer from visual impairment as well.

When Suman decided to get into the handicrafts business, the first person she roped in was her housemaid.

The manner in which Suman chose her team was very unconventional. She realised that there must be many like her who would want to step out of their homes and explore avenues. Once she began looking out for such women, there were many who seamlessly came in touch with her.

Soon, the total strength of women working for her went up to nearly 250. These included 10 visually impaired women working in her factory.

Today, products made at her factory range from household decorative items to mementos, and are in high demand thanks to their intricate designs. A table designed here now sits in the Rashtrapati Bhawan.

Today, Suman's success is entirely due to her determination and hard work. Awards and recognition, first at the Delhi government level and then at the national level, have been the icing on the cake.