Can you solve these ‘AI in education’ challenges? You may get to present the solution to government officials 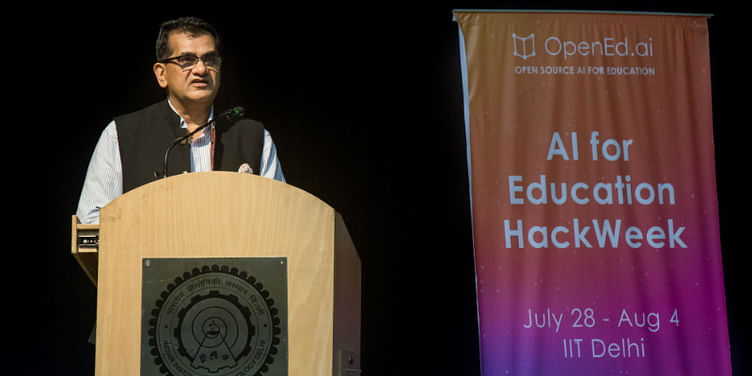 It was 6 pm on July 28, 2017 (a Friday) and the Lecture Hall complex at IIT Delhi was packed. While a majority of those seated in the auditorium were IIT Delhi students, there were many others, young and old, who had turned up from different parts of the city and India to participate in OpenEd.AI, a weeklong global hackathon aimed at leveraging artificial intelligence (AI) in the field of education. Anshul Bhagi, one of the organisers of OpenEd.AI, said they had received over 1,000 applications.

The three-day-long ‘bootcamp’ aimed at knowledge sharing included sessions by representatives from Omidyar Network, Google, IBM, and others. One of the key highlights was the keynote session by Amitabh Kant, CEO, NITI Aayog, Government of India.

Dr V Ramgopal Rao, Director of IIT Delhi, addressed the gathering to set the tone for the keynote address. IIT Delhi has recently welcomed a new batch of students for their undergraduate and post-graduate courses. He noted that a lot of students are generally focused on getting into specific branches or disciplines and not looking at the bigger picture or synergies. He remarked,

This fragmented approach to education is not really working well. What we need is a problem-solving approach. This is where events like hackathons come in…..No problem can be solved by leveraging only one discipline.

Dr Rao observed that one's branch and discipline don't really matter too much in the long run; it is the approach to problem solving that students should ideally pick up. Talking about the current scenario in the country, he said our key focus areas could be summarised under the acronym 'SHAPE', which stands for:

Talking more about pedagogy, Dr Rao touched on how the IITs (in partnership with MHRD) are looking to democratise education with a digital initiative titled ‘IIT-PAL’, short for ‘professor-assisted learning’. The goal is to level the playing field and provide students across tier-1, tier-2, and tier-3 cities with digital resources to prepare for the IIT entrance exams.

He then threw a challenge to the hackathon participants, asking them to work on any technologies that could be integrated into the IIT-PAL experience to make it better.

The need for an innovative society

Addressing the gathering, Kant said it is always a good learning experience to interact with students. Talking about the need for innovation, he noted,

The challenge for India is that we (GDP) are growing at about 7.6 percent per annum…. But we ideally need to grow at 9.5 percent for three decades or so. But this won’t happen till we become an innovative society..

He said that we as a society need to go from just studying via books to a more hands-on approach and look to solve real-world problems from scratch. He cited the example of how Silicon Valley has been a harbinger of innovation for technologies ranging from war machines to driverless cars.

But since India’s problems are different from those of the West, he pointed out that not all their innovations would be relevant here. Hence, there is a need for local innovations from people who actually understand local problems.

He cited some India-specific challenges like getting rid of sewage, better ways to collect garbage, innovations to provide arsenic-free water, and also catering to the needs of Indian farmers as some of the needs of the hour. While some of the above pain points mainly need a lot of ground-up innovation, he also spoke about the need for efficiency and looking at the bigger picture. He said,

Can we build a flyover in 30 days instead of many months? In my mind, many of these problems are technologically doable…. And we will not just find solutions for the one-billion population in India but also for millions of people living below the poverty line in different corners of the world.

Challenges in the education space

He said that while India has hundreds of great educational institutions and research labs that actively engage in research and which are making great strides, the challenge currently is in terms of applied sciences. He also noted that it will be difficult for India to grow without making advances in the fields of health, education, and nutrition.

Kant noted that while India is trying to provide easy access to education through various initiatives and schemes, the quality of education imparted sometimes raises questions. He cited the examples of how some students of class five in smaller towns weren’t able to read class-two textbooks. Another example was of how primary school students were struggling with even addition and subtraction.

Based on his observation and reports, he believes that the quality of learning has decreased. In some cases, this could be attributed to the lack of good teachers in an area, while in others it could be because of the approach to teaching. He, therefore, posed a thought to the gathering:

We are stuck in an incremental approach in education and need massive disruption to leverage innovative technologies in education…..How we use technology to leapfrog in the field of education will be important for the next 10 years..

The role of AI

A balancing act between universal access to education and ensuring quality is not an easy task. But Kant believes that AI has the power to solve this pain point. He noted that until recently, the applications of AI had been focused on highly capitalised industries and for the benefit of the elite. Little was done in the field of education. Talking about the possibilities of AI, he said,

The role of AI and data science is very critical, in my mind... It has the power to provide quality and scale at an affordable price…It can allow access to insights from massive data sets. So government bodies are also able to visualise impact and understand where they need to invest more or less.

Kant said that the government understands that the AI learning curve is steep and that NITI Aayog would provide a helping hand in that regard by providing access to data sets and even the visualisations techies need.

While OpenEd.AI is running a weeklong hackathon with $19,000 in prizes, including a $6000 grand prize, Kant announced two additional challenges for the participants, which are also open to the general public.

The winners will get a chance to present to and interact with government officials and CEOs of top Indian startups.

Related read: Amitabh Kant on how the Atal Innovation Mission will create an entrepreneurial mindset among students