Pulling a 'Baahubali' act in real life, actor Rana Daggubati doubles up as an entrepreneur 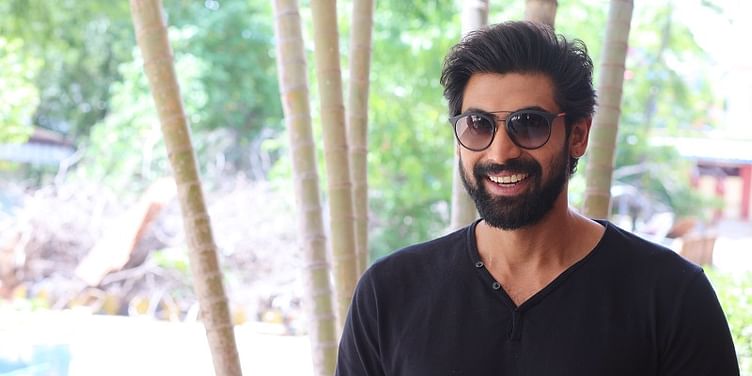 Actor, entrepreneur, and AR and tech enthusiast, 32-year-old Rana Daggubati is as multifaceted in real life as he is in reel life.

“He is easy to talk to and doesn’t have the airs of a star,” says a veteran journalist when I mention an upcoming interview with Rana Daggubati. The actor’s Bengaluru visit has been postponed so many times that I almost give up hope. But as they say, ‘all good things come to those who wait’, the visit, and the interview finally materialises.

Sitting at the Oberoi Hotel lounge in Bengaluru, I see his team in action. They are desperately trying to fix last-minute appointments. The actor’s new film is releasing this week and his bytes are very much in demand. I thank my lucky stars that the promised interview is happening.

As Rana Daggubati waits for the Press to arrive, he is in character. Dressed in a crisp white shirt and dhoti, he is Jogendra from Nene Raju Nene Mantri, his much-anticipated film releasing on Friday (today). The trademark dark sunglasses are lying on the table. Gone are all the traces of the fictional power-hungry warlord from Baahubali. Today, I am talking to a small-town moneylender who has been pushed deep into the world of power, politics, crime, money, and fame.

A warlord, an Indian marine officer or a super villain – the actor essays different roles with ease. “This is the best part of being an actor. I wake up in the morning and become somebody I can never be in real life,” says the 32-year-old superstar.

I then jump straight to the question that is playing on my mind, centred around one of the biggest blockbusters of all time. So was Khal Drogo (a character in Game of Thrones) really the inspiration for Bhallaladeva of Baahubali? “When Shobu, the producer approached me, I asked him, “Who else had you considered?” When he replied that they had thought of Jason Momoa (who played the role of Khal Drogo in the popular TV series), I just jumped at the opportunity,” exclaims Rana.

In a career spanning seven years, the prolific actor has stood out with each role, with the Baahubali films skyrocketing him to fame and superstardom. But Rana is much more than an actor. He is as multi-faceted as the different characters he plays.

He has entered the visual effects business with Spirit Media P. Limited in 2005.

The company has produced special effects for over 80 films, including Rajnikanth’s Sivaji and Kamal Hasan’s Dasavataram.

Subsequently, he went on to set up AppStar and his latest venture Kwan.

“In Baahubali, we used virtual reality (VR), which was really cool and the greatest experience of my life. But this technology is expensive. So how do we bring this experience to everyday life? That’s when we thought of combining hologram technology and 3D to use AR. The idea is if I really can’t be somewhere, why can’t I come to life through AR? Everyone owns a smartphone these days, so why not use that to experience it?” asks Rana with the same enthusiasm of a child describing his favourite superhero.

It began with the use of standees, where people used the app, AppStar, his latest startup, to project an AR image of Rana by pointing the app at the standee’s picture. What started as a film promotion turned into a passion. He felt it could change the theatre going experience.

“I tested this in my office with my three films – Baahubali, The Ghazi Attack and Nene Raju Nene Mantri. And knew we had something path-breaking. After the release of the movie, I want to delve deeper into this. We have already started work on compressing the data to make sure that the file size is smaller and doesn’t suck up battery life as it does now,” says Rana.

The joy of making films

Films have always been a part of Rana’s life. As the grandson of D Ramanaidu, a famous producer in the Telugu film industry, he was exposed to different aspects of filmmaking.

The actor is a passionate filmmaker too and understands the need for the film industry to be up-to-date with the latest technology to reach out to audiences.

He should know as he started his career in the film industry by opening a visual effects studio nine years ago. Rana believes that technology is more his forte than acting has ever been. So when I call him a star, Rana is embarrassed. To take his point further, he explains how filmmaking is a lot about content and the craft that goes behind it.

“I don’t have any aspirations of becoming a big superstar. I can continue talking about AR and technology for hours on end as I can talk about the character I am working on. Movies and storytelling drive me. I don’t have to be an actor to be a part of storytelling. I could do it with someone else as the actor and still enjoy it. There are so many stories to tell in so many different ways. Being famous is a job; telling stories is what I do.”

While Baahubali-The Conclusion, still in theatres and raking up millions for its producers, Rana has already disassociated himself from Bhallaladeva,­­ his character in the film. He is all set to woo audiences with Nene Raju Nene Mantri.

The road is not always easy

Filmmaking, he explains, is a collective art form; it isn’t about one person. “The love for an actor comes from the content that is written for him,” adds Rana. “After a film is completed, I show it to everyone in my inner circle. This ensures lesser mistakes. Being a part of the film makes you close to it. Someone from the outside can give a clear and the right perspective.”

However, it isn’t that simple. Rana explains that it wasn’t easy to finance The Ghazi Attack. It was a war film, that didn’t have a romantic angle or over-the-top action.

“It didn’t make sense for regular financiers. I didn’t take any money upfront but did a full backend because I believed in the film. The cost was exactly half of that of my regular films. People then jumped in because it’s a low cost film. Niranjan the producer was the only person who believed in the vision that I had for the film,” explains Rana.

Going deep into the character

The actor usually focusses on one film at a time, working hard to get into the skin of the character. “You start being that person (character) and before long, you start walking and behaving like the character. But the magic is that once I see the film, I am done with it and the character. This is the most amazing part of our jobs!” says Rana.

With Nene Raju Nene Mantri, what attracted Rana was the story and the character. Sitting with the team, Rana ended up creating Jogendra’s life story. His life sketch is what this film is all about.

“This might or might not translate onto screen, but it gives you an insight into the character’s personality. And that’s what got me excited. The characters in the film are simple people who are forced to take drastic steps in their lives,” explains Rana.

Bringing in a different perspective

It cannot be disputed that Rana is a multi-faceted actor. For his new movie, he had to drop a lot of muscle weight to play Jogendra, a moneylender who becomes a politician.

“In Baahubali, everything needed to be larger-than-life. We were creating a fictional kingdom that had a folklore feel to it; a story of two brothers. There are kings with the strength of demigods, and that was why the story of Baahubali and Bhallaladeva was different. Bhallaladeva killed a bison with his bare hands; it was a different world with different strengths,” explains Rana.

So in the midst of these busy schedules, does he find time for himself? The actor says that he indulges in some ‘me-time’ when he is in Kodaikanal or Goa working on scripts with writers for his future films.

The actor is also charged about his new venture, Kwan, that brings people from different areas of the film industry together. If someone has a story idea, the team finds writers and directors and also pitches it to the right actor. Rana wants to bring talented writers from India and abroad to the forefront.

He explains it further. “The scene is changing and I want my films to focus largely on story and overall content. I am also willing to help out actors who are open to this idea. I would say, ‘if you are willing to experiment, let’s start talking’.”

“I have a very different take on life. What others say or think of me are their problem and not mine,” he says, signing off the conversation.