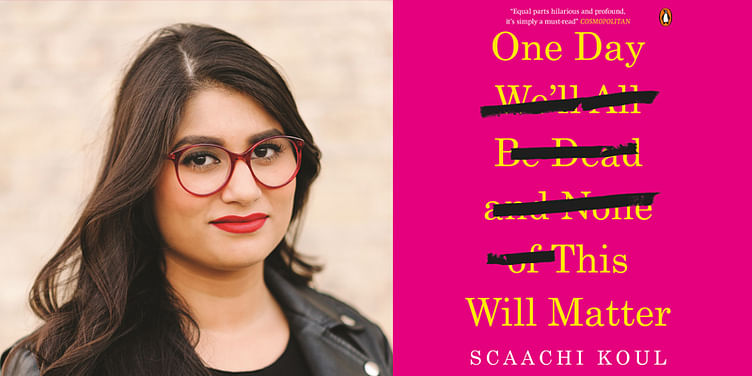 Growing up as a woman of colour in Canada was a double whammy since the author had to bear the brunt of racist as well as sexist experiences, but she seems to have come out of it stronger and wiser

Scaachi Koul’s One Day We'll All Be Dead and None of This Will Matter is a collection of essays based on her experiences of growing up as a ‘brown girl’ in Calgary, Canada. Though, at first glance, the overarching theme seems to be all about the second-generation immigrant experience, Scaachi touches upon a wide range of topics with a beautiful mix of humour, intelligence and bluntness, including how her parents did her wrong by saddling her with a name like Scaachi (with a silent c, evocative of P G Wodehouse’s Psmith with a silent p).

Growing up as a woman of colour was a double whammy since the author had to bear the brunt of racist as well as sexist experiences. But Scaachi, who writes for Buzzfeed Canada, seems to have come out of it, if not unscathed, at least stronger and wiser, and with her sense of humour intact.

The title says it all

It is said that positive thinking is an acquired habit. For instance, if you take two people from similar backgrounds and comparable life experiences, their appraisal of the quality of their life could widely vary depending on their attitude and approach. Scaachi’s book One Day We’ll All Be Dead and None of This Will Matter has words cut out so it reads ‘One day this will matter’. If we start thinking that our opinions matter, that the work we do will make a difference, that our life is meaningful, it is certainly likelier to become true. As they say, like attracts like and positivity attracts positivity.

You inherit fear from your parents

Though Scaachi seems to imply that the fears she has inherited from her first-generation immigrant parents are a result of the family getting transplanted from one continent to another, I believe the same is true for all Indian parents. It is true that we live in a world that is vastly unsafe, with high levels of crime and violence being the scary norm of the day. However, instead of teaching children courage, we end up overprotecting and mollycoddling them, thereby inadvertently causing fear to seep into their psyche.

We lived three minutes from a Mac’s Convenience where I’d go for ten and twenty-five cent candies from a bulk bin, but never alone. (“Some might grab you,” Mom would say.)

Later on, Scaachi goes on to describe her experience as a Girl Guide during her teen years.

When I went to Girl Guide camp, I refused to help build a fire by lighting a match because what if I burned my entire f***ing arm off?

By the time Scaachi grew up, she had become a bundle of paranoia fearing everything from flying to swimming in the sea and got a panic attack when her parents went off on vacation for a week and did not get in touch with her till their return.

Parents often place high priority on the physical safety and academic achievements of their children, but are often unaware of the neurosis they create which they should consciously avoid.

Also read: So many books, so little time: 50 books that are worth a read at the earliest

Anxiety can be overcome

Scaachi talks about an embarrassing incident when she was trying out a beautiful skirt during shopping, which turned out to be a size too small, and the shop assistants had to cut her out of it. As humans, we are extremely afraid of embarrassing ourselves. Making a fool of ourselves in front of a group of people would probably be one of the scariest nightmares for most. But these fears are something that everybody inherently faces, so just the question of ‘so what’ often helps. If I go on stage and fumble for words, people might laugh at me. By asking ‘so what?’, one can remember that they might laugh for a couple of minutes and then forget all about it.

One must be self-aware to correct prejudices

Scaachi also explores the various experience of overt and covert racism that she faced. She recalls being asked by white kids not to sit with them since she was a brown girl. She talks about desperately trying to play down her Indian identity – taking sandwiches instead of khichdi for school lunch (though she loves khichdi), removing her favourite gold earrings, and avoiding wearing ethnic clothes and making various other efforts to assimilate into the mainstream Canadian populace. She also talks about growing up, making peace with her identity and accepting her identity to the extent of flaunting her Indianness.

But she also talks about other kinds of racism – her parents’ belief that they were the cream of the diaspora since they are fair-skinned, upper caste Kashmiri pandits. She narrates how maids at her relatives’ homes in India had to stand in the kitchen and eat, since they were not allowed at the table. Indians are often quick to judge Caucasians for their racist outlook without realising the extent of racist, casteist behaviour that they casually indulge in on a daily basis.

Life is all about evolution. Introspection brings awareness and with it the scope to learn, grow and change for the better. In this context, One Day We'll All Be Dead and None of This Will Matter is an interesting and insightful read.