From selling newspapers to working for an MNC, the journey of 22-year-old Shashikant is pure inspiration 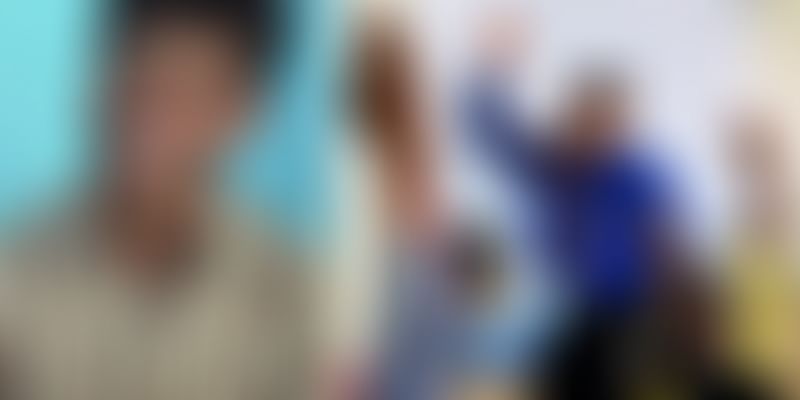 Shashikant Jaiswal has faced life and its challenges head-on, and has become a role model for others.

It doesn't take much to lose heart, does it? The reasons to give up are many, but holding onto that last trickle of hope can indeed be life-changing. Refusing to give up, 22-year-old Shashikant never let his adversities get bigger than his goals.

Hardships all the way

Born full of dreams in a space where they hardly come true, Shashikant grew up in Mahatma Phule Nagar, a slum cluster in Mumbai. The slums had a large population of Dalits, but being a boy with mature views, he never let discrimination get to him. “I follow Babasaheb’s writings. They are remarkably insightful especially when people all around are so strongly divided by caste.” he says.

In spite of his positive outlook, life was hard. His father had been thrown out by his parents and forced to start life on his own. Shashikant recalls being very small to even remember the incident. “We had no house of our own. We lived in a juggi for a very long time.” Surviving on an insufficient amount of Rs. 3,000 a month, that his father earned by selling corn, the family of four toiled to eke out a living. “My father’s income went into buying food. We had to borrow money when we fell ill or had to buy books for school.” he shares.

With no additional income to support his studies after the seventh grade, Shashikant, zealous and keen on completing his education took up odd jobs like distributing newspapers and helping political parties set up their billboards in order to make some money. “I would earn Rs. 500 a month and give it to my mother. All of it went into paying my school fees.”

A love for learning

What remained constant amongst troubles was Shashikant’s love for learning. A student who never came second in school, he embraced every opportunity to learn. For instance, once when a passer-by asked him for an address written in English, he could not help him because he came from a vernacular school and did not know the language. This did not dishearten him, instead he approached his teacher and convinced her to teach him English during recess.

Along with school learnings, Shashikant says the lessons he learnt in life were astounding. “Despite extreme poverty, my mother was not expected to step out and work. Women stepping out in public to earn is still looked down upon in my family.” He also recollects fighting with his parents to let his younger sister pursue a degree in BEd after her undergraduation.

After school, Shashikant wanted to take up Electrical Engineering to continue his passion of gaining knowledge. But this time proved to be tougher than them all. He could not fulfil this dream as he did not have enough money to pay his fees. He was forced to settle for a degree in Commerce. For the first time he felt helpless and completely discouraged.

In 2013, Shashikant was informed about the Magic Bus livelihoods programme at Vikroli. Devender Chaubey from the Magic Bus staff urged him to come to the Livelihoods Centre. Demotivated, Shashikant remained highly skeptical. “I had reached that point in life when I had started doubting everything.” But clinging onto a belief that life would change, he decided to give it a go. The Magic Bus Livelihoods Programme connected the aspirations and potential of young people to available market opportunities. A platform working with children and youth in India’s underserved communities, it helped build employability skills and mapped job potential based on individual strengths and mobility.

With the programme being the only opportunity in sight, Shashikant was aware that only a salaried job can put an end to the financial distress at home and also support his dream for further education. He decided to join the programme in 2014. “As I started the Livelihoods training, my doubts were put to rest. I knew I would learn something different, learn skills that would help me get a job and improve the situation in my family.”

Throwing light on how this one chance turned his life over, Shashikant says, “I was in the first batch of the Livelihoods programme. Back then, I was certain I could be an entrepreneur. Through the Livelihoods training, I actually got an insight into my skill sets and drawbacks. They helped me develop a roadmap for my career.”

Three years into completing the programme, Shashikant now works as an Account Representative for Accenture, a multinational software company, earning Rs. 25,000 per month. Magic Bus for Shashikant as he describes was hope that was thrown to him as a lifeline at a time when he was completely disheartened by how the world worked. “I had begun to believe that success is all a money game – only the rich can afford it. I was also only focused on myself. With Magic Bus, I started believing that I could do good for others – particularly the children in my neighbourhood, who have no mentors and no guidance.”

The training programme left Shashikant feeling more driven towards changing mindsets around him. He believes that a gender equal society is possible but change has to begin from home. He continues to fight to bring about this difference.

Also wanting to make an impact beyond home, he shares, “In my tenth standard, I felt this strong urge to do something for my community. I wanted the children here to go to school. It might seem to be an ordinary, achievable dream outside Mahatma Phule Nagar but not so in a community of so many out-of-work youth taking to substance abuse, a community that is yet to wake up to importance of education.” This strong conviction he felt had its roots in the training he underwent in Magic Bus as a Youth Leader.

Presently, Shashikant puts this dream in action and mentors underprivileged children using an engaging activity-based curriculum. “I also run support classes for children in my neighbourhood on weekends so that they can keep up with the pace of learning at school.” he adds. Shashikant dreams of opening a school in his neighbourhood and foster a learning environment modelled after the gurukul system of education. “Every child nurses a dream. Poverty stifles that very dream. My education will hold a light to those who are fighting to save their dreams from the clutches of poverty.” he says.

After a Masters in London, this fisherman’s son is back in Chennai to sell fish online

From teaching in a garage to becoming the director of 3 schools: Nisha Jaiswal’s story

Shashikant is a role model to young minds who want to break out the cycle of poverty and aspire to be like him.

He also has other dreams that concern his family. Shashikant wants to buy land in Allahabad, his hometown, and build a house for his family that has lived in other people’s homes all their lives.

Often ridiculed by neighbours for his ambition and dreams, and at one point even being beaten up, Shashikant has come a long way. The once positive boy that saw the good in all has returned. “I have got my energy back. At one point in time, when I could not get into electrical engineering, I was heartbroken and disappointed. Magic Bus pulled me back on my feet. Now, I believe I can study further and be an entrepreneur.”

Although most of his income goes into paying off debts, Shashikant refuses to put his dreams to sleep. He ends on a note saying, “Never give up. Strive for excellence and care for all those who are less fortunate or who ask for help."