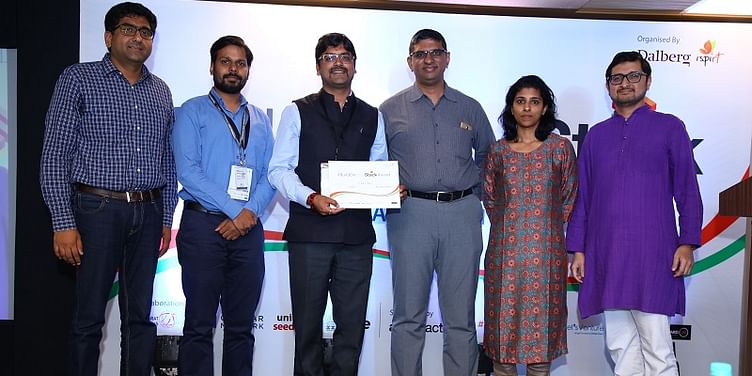 The venture pitch competition saw EasyGov emerge winner from a field of more than 180 entries that saw 12 startups being shortlisted for the grand finale.

Nandan Nilekani, Unique ID Authority of India Chairman, who prepares to return to IT major Infosys, is a great believer in the transformative powers of data. He says,

"India will go from a data-poor country to a data-rich one in three years. India has a unique digital infrastructure, a set of serendipitously developed public APIs such as eSign, Unified Payments Interface, Bharat Interface for Money, the Goods and Services Tax Network and eKYC developed as public goods. India is the only country in the world that can empower every resident with her own data, thanks to the technology infrastructure for inversion of data available due to Aadhaar and IndiaStack. We need to think about how this data wealth will translate into real wealth for users."

And following this theme was the finale of the venture pitch competition, #BuildonIndiaStack, organised by iSPIRT and Dalberg, which sought to identify early-stage startups, unlocking new business models and reaching the underserved by leveraging the India Stack.

Explaining the reason behind conducting the venture pitch, Varad Pande, Partner at Dalberg who also was on the jury panel said,

“We called this competition to bring forward innovation for India 2.0 and India 3.0, which is majorly missed, considering we see a lot of innovation for India 1.0. And as the architecture of India Stack is so minimalistic, anyone can plug in to create business value to it.”

Additionally, he stated, “Through this competition, we were also trying to learn the experience startups have while connecting to the India stack, and encourage more businesses to use it.”

According to the organisers, a part of the objective was to see a strand of innovation, while identifying gaps and providing strategic business needs.

“Through this competition, we want to start a journey and robustly supporting the startup ecosystem,” said Varad.

Sanjay Jain, Chief Innovation Officer at CIIE, who has been associated with the IndiaStack initiative, said, “We have seen applications that go beyond fintech and range from agricultural platforms to citizen empowerment initiatives, amongst others.”

On the other hand, supporting partners Omdiyar Network and Unitus Impact Fund might be looking at new innovative technologies while looking at building their pipeline of investments. This is coupled with mentoring and guidance from not just partners but also strategic advice from policy advisory firm Dalberg, which is focused on the lower-income segment.

Speaking about the judging process, Srikrishna Ramamoorthy, Partner, Unitus Seed Fund said, “We have judged these companies on the basis of how they really fit in the mission of IndiaStack and how innovatively have they been leveraging the stack. With most of the usage in financial technology, a criteria also was how different it is from that sector.”

With over 180 entries, the selected 12 finalists from sectors such as e-governance, healthcare, education, fintech, environment and agriculture presented their ideas to a full-house audience:

It is impossible for people to know their entitlement from thousands of government schemes on scholarship, social security, financial inclusion, grants and subsidy. It is frustrating for individuals to apply for government schemes or service. The process is unclear, the UI confusing and unprofessional and rude touts rule the government services infrastructure.

EasyGov is a cloud solution to help Indian citizens discover their eligibility for thousands of welfare/benefit schemes of the government. Aadhaar, eKYC and eSign integration eliminate the need of proofs and makes complete process paperless irrespective of automation level of respective government department. EasyGov solution will help in rolling out 10,000-plus schemes in local language to enable people to check family entitlement from phone.

Journee empowers transit authorities to ensure smart commuting experience to its commuters with increased operational efficiency and reduction in hidden revenue loss. The startup accomplishes this through an automated, cloud-based fare collection system based on UPI enabled with AI and backed with real-time transit data.

For example, when a commuter chooses to pay by UPI, the conductor, through his Smart Ticketing Machine, has to scan the QR code displayed on the profile section of commuter's BHIM app. Then the application dispatches a collect request. On successful authorisation the ticket with relevant travel information will be printed or sent as an SMS.

Megdap offers a technology platform for AI-based language processing, digitisation and analysis, in all major Indian languages. However, one of the major challenges the financial institutions face is communicating with the rural customers in their local language. That's where TexLang steps in to offer a platform for the enterprise to translate the documents into the required local language. Also using TexLangs RECO or digitisation engine, any image files, especially KYC and other related banking documents across a wide set of languages, can be digitised and extracted into an editable format.

Krishiyog is a technology platform that provides farmers and farmer groups a transparent channel for accessing end-to-end services such as low-cost credit, quality inputs, customised extension services and market linkages. They are providing services to all of nine crore small farmers irrespective of their access to smartphones.

Haqdarshak is a mobile and web technology platform with the aim of delivery of government and private schemes and services to eligible citizens. It digitises these schemes and through their platform deliver it in rural and urban low-income areas through a network of local community entrepreneurs.

It is an on-demand digital platform that allow farmers to find, connect, share, buy and sell all farm needs. Farmsurge aims to create direct link between farmers and agribusiness, both agro input provider, farm output buyers, warehousing, logistics, food processing or retails. Using Farmsurge, farmers can directly interact with scientists or agro research. In other words, Farmsurge is a Uber or Ola-like aggregator business model customised for agriculture sector.

Gradufund makes higher studies affordable by offering (i) financial aid to students by working with educational institutions and lenders, (ii) Lowering lenders' turnaround time and cost of acquisition by 4X for students' cohort, while expanding their customer base.

Rotating savings groups (ROSCA), also known as chit funds in India, are an indigenous financial tool for savings and borrowing. With its unique combination of savings and borrowing, ROSCAs are an instrument to inculcate a habit of regular savings, and a technology-enabled ROSCA can move informal savings into the banking system. Kyepot is trying to digitise the indigenous financial system of an economically under-served population and bring them into the fold of the mainstream banking products and services.

Plastics for Change has adopted strategies from fair trade agriculture and applied them to the informal recycling economy in developing countries. The deal process and mobile platform provides urban waste pickers with access to fair market prices. The venture works with brands to immediately improve the social and environmental impact of their products, while increasing the value of their goods to today’s conscious consumers.

Indians lose tens of thousands of crores in lotteries every year and low-income households are at great risk to financial shocks due to low savings. FreeSave is a digital-first, safe investment instrument that encourages people to save money while playing lottery. Or, simply, a lottery without a downside.

The challenge to social entrepreneurship

In The Best Countries to be a Social Entrepreneur, a 2016 report by Thomas Reuters Foundation, India ranked 14th, ahead of China, Australia and just behind Germany. What was more promising was that India ranked fifth in terms of ease of access to investment funding and eighth for grant funding.

But the ground reality seems different, with funding and scalability often highlighted as major challenges to start up by entrepreneurs in this sector.

With limited examples of success, Varad tries to explain how the India Stack can help mitigate some if not all the problems,

“There is much value in the market. Especially when incomes are rising in the social spectrum. What are seen as challenges is the high costs pertaining to the ability and cost to serve. But with Aadhaar and components of IndiaStack such as electronic KYC and UPI, the costs can be brought down drastically.”

However, the winner of the challenge, EasyGov, has a different reality to state. When asked the reasons for participation, Co-founder Amit Shukla stated that mentorship from Nilekani was their biggest lure. They also wanted to bring to the notice of the Aadhaar and IndiaStack community that these technologies are not used and leveraged at the grassroots levels.

The stack committee should see into reinforcement of these technologies. Most government offices don’t accept e-sign. We also see that at the bottom of the pyramid, Aadhaar authentication isn’t taken as date-of-birth authentication. The government should also open their APIs in a similar way income tax department did or ISRCTC did for railway bookings. The third challenge we feel is the acceptance of e-sign at the bottom of the pyramid.

But, again as Srikrishna rightly points out, it would be wrong to compare and see social impact businesses in the same light as regular consumer businesses.