How this IAS officer is making Madhya Pradesh disabled-friendly 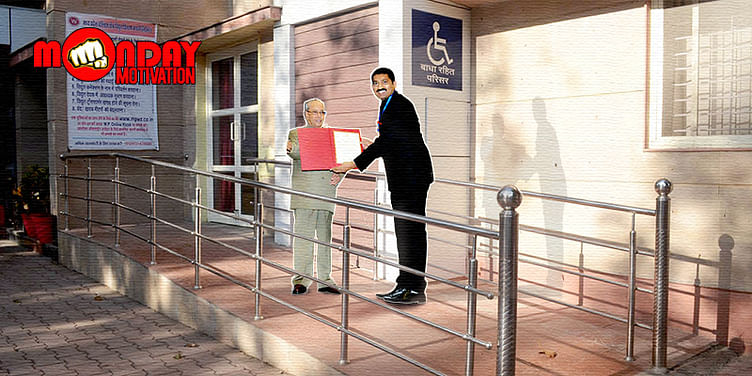 The IAS officer believes that bringing the change is possible by leading by example.

At the age of 42, and during 10 years of being a District Collector (DC) in various districts across Madhya Pradesh, P. Narahari has over 40 awards to his credit, especially for his barrier-free environment and open defection free initiatives. A barrier-free environment ensures that people with disabilities can move about safely and independently, without encountering obstacles that limit their free movement.

He was recently awarded at the NCPEDP-Mphasis Universal Design Awards-2017 in recognition of his work for persons with disabilities (PWD). He says, “I'm really happy that there is recognition from an organisation like this which is working for the disability sector.”

Hailing from a village called Basantnagar in Karimnagar district, Telangana, Narahari recalls his Class X days and a project called ‘Akshara Ujwala’ — an adult literacy programme — by the then DC of Karimnagar, Banwar Lal. After class hours, Narahari and his classmates would gather the elders, who were illiterates, in a government school and teach them basic literacy skills for a year.

"I realised that this was a great initiative that the collector had taken up. It was something that I wanted to do in my career and I would be satisfied if I joined the administrative services," he says while explaining his decision to become an IAS officer.

Although he studied mechanical engineering, he kept alive the desire to crack the civil services exams and prepared for them simultaneously while at college.

An officer of the 2001 batch, Narahari was posted in Seoni, Singrauli, Gwalior and Indore as a DC and a district magistrate, and currently holds the position of Secretary (Revenue) in the Madhya Pradesh government.

Narahari says that the disability sector has been particularly close to him. He explains that during his tenure as a DC, he would identify 200 individuals from various government departments, private organisations, colleges, universities, the Indian Medical Association, lawyers’ association, etc., who would help in achieving the barrier-free environment goal. These individuals are trained by experts.

We have building codes that specify what kind of infrastructure needs to be created to ensure that there is a barrier-free environment. We call the organisations, especially government agencies, whom we train and educate about the specifications needed. For example, the railway and bus stations frequented by the public for their day-to-day activities need to be disable-friendly.

Building codes are a set of guidelines that regulate building construction and include building requirements such as fire safety provisions, structural safety, design, accessibility, among others.

After the training, the individuals are divided into four to five groups and are then tasked to visit various institutions to conduct an 'audit act' to determine if the institutions are accessible. The findings are then discussed with the institutions mentioning the areas where they lack accessibility and are given time and expertise to make the place disable-friendly.

His realisation is based on years of experience, “What we have found is that they are aware of the building codes. It is actually the absence of training and information that leads to poor infrastructure.”

The projects take about six months to a year to complete. As for the capital, he says that organisations or departments are usually allocated funds for the upgradation of their infrastructure every year and they utilise them to carry out the projects.

A lot of follow-up work is done to ensure that the work is being carried out. "With good follow-up, a lot of positive things happen,” he says.

The four main things that the programme focuses on are ramps, railings, low-rise toilets, drinking water facilities that are low enough for wheelchair-bound persons to reach.

Action is taken against individuals or organisations that do a shoddy job in implementing the project, he says, adding:

I've seen that in a year, a lot of these organisations change. Once the mindset has been changed, subsequently they will change their infrastructure.

Merely creating infrastructure would not be sufficient as there is a need to create public awareness, especially among those with disabilities, about the existence of schemes and initiatives that will benefit them.

We try to organise a lot of awareness campaigns and workshops to sensitise them as there is a huge amount of neglect within the family members of those with disabilities.

For this purpose, Narahari says that a local-level committee, headed by the DC, is created where mentally challenged and PWD persons are identified in the entire district, including children and adults along with their legal guardians. The legal guardians should provide authorised documents about the disability, and the extent of mental retardation, if applicable. Furthermore, he says that parents’ associations are formed in all tehsils that provide training to the parents on how they should handle their children with MR or PWD.

During his time as a DC in Gwalior, the administration, he says, organised a training programme called 'Panch Sparsh' for visually challenged persons (as they have higher touch sensitivity) that had five kinds of activities, such as massage, acupuncture. Job fairs and a call centre was also set up, he adds. Persons who are disabled and also have mild MR can be employed under government schemes. Although there is no cut-off for the extent of physical disability or MR, he states that the employer has the prerogative of determining who fits the role.

The programmes have greatly benefitted such individuals as the earnings are better, says Narahari. "The income has gone up from Rs 1000-2000 per month to Rs 3000-4000 per day," he reveals.

Identifying himself as a ‘field man’, he hopes to get more opportunities to work on the ground as his current position limits him to an office. There is only one mantra to bring about change, he says: “Lead by example”.