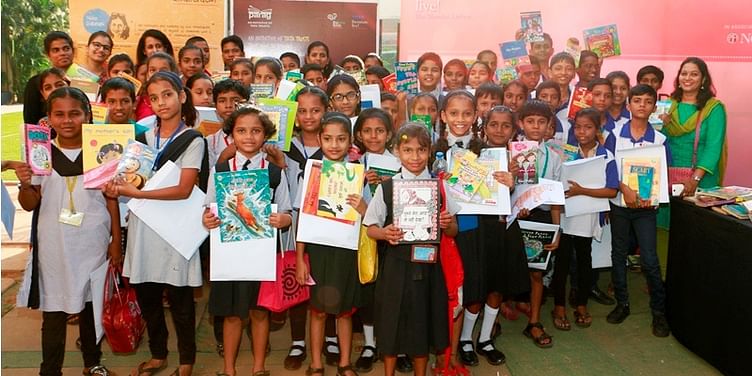 Parag focuses on the development of children’s reading habits by providing them access to illustrated, engaging storybooks in various regional languages. By doing so, it ensures that reading storybooks is not just for children who understand English.

In 2005, Tata Trusts launched the initiative, Parag, which paved the way for more than 20 million young readers to access books in various languages. It all began when the strategic planning team, headed by Professor Krishna Kumar, recommended the Trusts to invest in Indian languages for children’s literature. Parag began with a small success that has grown incrementally over the past twelve years. Now, it is rapidly impacting many young readers by supporting the development of quality children's literature and original stories in Indian languages that cover a variety of genres.

“Because of the way the publishing system works, languages which have an international presence tend to dominate the entire publishing scene including that of children. The Parag initiative ensures that there is some level of support for creating material in other languages,” said Manisha Chaudhry, senior publishing consultant and former editorial head of Pratham Books.

The reason for this initiative

Even though India has a large population of schoolgoing children, there exists a lack of quality literature in many regional languages. This creates a division between children who can read English storybooks and those who can’t. A study of the education sector commissioned by Tata Trusts showed that children's literature market is a mere five percent of the publishing industry.

“We don’t have enough children’s books in Indian languages. The power of quality literature has not been realised. Literature introduces children to stories, ideas and issues related to their own lives as well as to new worlds. Since a majority of children go to government schools, it is essential that they get books in their languages in the initial years when they are learning to read. Unfortunately, publishing for children happens largely in English (45 percent). Most content in Indian languages is reproduced, with little or no original and contextual material being published. Furthermore, we don’t have libraries for children to visit, browse, read, and discuss,” says Swaha Sahoo, Development Officer, Tata Trusts.

Parag is a non-profit initiative of Tata Trusts which has grown immensely while spreading its impact across India.

“We initially focussed on supporting the development of original, contextual storybooks in Indian languages and gradually expanded to supporting school and community libraries to promote reading for pleasure as an integral part of the education and growth of the child,” says Swaha Sahoo.

In the past decade, Parag has supported the development of 420 new stories for children across the age five-16 by collaborating with a number of children’s publishers, consultants, experts, non-profit organisations and partner organisations. The stories have been published in Hindi, English, Urdu, Marathi, Gujarati, Kannada, Telugu, Tamil and Oriya, as well as in non-mainstream languages like Mundari, Bhilori, Pawri, and Santhali. The books have reached to over 20 million readers in schools, communities, libraries and homes and have taken different formats like ePubs, audio, braille, tactile, and animated eBooks.

Furthermore, Parag supports libraries across eight states, reaching 40,000 children. These include Rajasthan, Jharkhand, Uttarakhand, Orissa, Maharashtra, Madhya Pradesh, Gujarat, and Karnataka. Most of its work happens in government schools and some of it through community libraries

Parag has come up with a few courses to expand its reach while ensuring that quality isn’t compromised on. Parag’s Library Educators Course (LEC) focuses on building skills for setting up and running children’s libraries. LEC is offered in Hindi and English. Young artists are trained to illustrate for children through the Riyaaz Academy for Illustrators.

Last year, Parag initiative teamed up with Tata Literature Live to launch the ‘The Big Little Book Awards’. It serves to recognise regional authors and illustrators.

With Marathi being the language in focus for candidates last year, Madhuri Purandare and Atanu Roy, won awards for the best Marathi author and illustrator, respectively.

The main objective of the awards is to inculcate a love for reading in children, along with an understanding for neglected regional literature. This year, for its second edition, Bengali has been chosen as its language in focus.

Parag will continue to support the publishing of quality books for children in regional languages, focussing on original writing, non-fiction, poems, and inclusive books. Translation within Indian languages, stories from traditional communities will also be emphasised.

“The biggest impact we hope to have is a cultural change in how reading for pleasure is perceived both at home and school. Children’s literature should be a part of education, and reading books should be integral to everyday life. We hope that the first-generation learners are introduced to the joys of reading and do not find it a burden to learn. We want to promote books as shared resource that children can access through school, community, and public libraries,” says Swaha.

Parag will continue to strengthen the practice and discourse around children’s libraries alongside expanding its reach across various states in India.