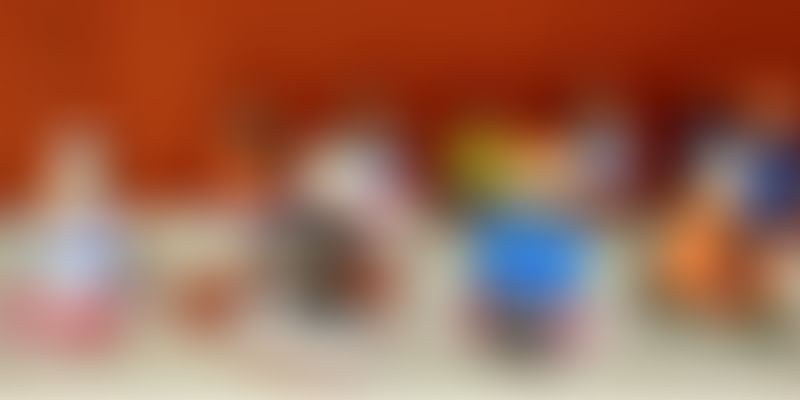 PhotoSparks is a weekly feature from YourStory, with photographs that celebrate the spirit of creativity and innovation. In this photo essay, we feature some of the urban and rural art works on display at Tamaala Art Gallery in Bengaluru.

Located in JP Nagar, Tamaala was founded in the year 2015 by Suvarna Kamakshi and Vinay Prashant. Their vision is to make art pervasive, and reach patrons and connoisseurs easily. “We also want to serve as a platform for upcoming artists who have a creative vision but haven't had the right platform to display their talents. We believe that there is a need to bridge the urban-rural gap in traditional and tribal art,” explains Suvarna.

The co-founders feel there is not enough of a focus on art in Indian schooling systems, which are mostly academic focused. Suvarna, a professional artist for the last decade, has a master’s in English literature from Delhi University, and worked for about eight years in the service industry - including a stint at Jet Airways. Vinay, now an art entrepreneur, has an MBA and worked in industries such as retail, telecom, media and entertainment for 18 years.

“We've been looking at artists who inspire us with clarity in their vision of the kind of art they would like to pursue. We have also been lucky to have been approached by a large number of talented artists,” says Suvarna, explaining the choice of art works on display.

Tamaala has worked with over a dozen artists, some of whose works are featured in this photo-essay: Amit Hiremath (watercolour artist from Kolhapur), Chandramouli (retired accountant now working on rock murals), Chaitra Kumar (fourth generation puppeteer exploring papier-mache dolls), Vidya Nag (up-cycling artist with a range of bags and lanterns made from discarded newspaper), Anita Singh (terracotta fabrications), and Balraj (caricature artist, cartoonist and illustrator).

“Art means everything to me. It inspires thought and celebrates humankind's biggest achievement. Any form of human creation is truly enthralling to the beholder and that is what differentiates humanity from all other life forms,” says Suvanra.

Recent shows at Tamaala include A Piece of India (tribal and traditional art forms) and one on Ganesh Chaturthi (with four forms of Ganesh Chaturanana). Their next show is a festival-based collection with a lot of colour and light.

Suvarna herself works in both wood creations and abstract artworks, and prefers oil on canvas. “I have referenced books on the European classical forms of oil painting. Now, my work is inspired by Indian philosophy and is a figurative abstract style,” she says.

The gallery hosts workshops and is also a discussion space for artists to exchange views and techniques. The co-founders have received interesting reactions from children as well. “One child had a physics explanation and astronomical reference for every single painting. They are our true creators,” says Suvarna. “We believe that once equipped with basic techniques and with a lowering of inhibition, the human mind explodes with the possibilities of creating on any canvas or media,” she adds.

The art industry in India still faces challenges such as a lack of affordable exhibiting space, difficulty for an artist to reach patrons, and a low level of interaction with art in the usual galleries. But projects like the Kochi Muzuris Biennale are taking off and making art move closer to people, observes Suvarna. Interesting tech media trends to watch are VR/AR, which offer great possibilities in experiencing and enjoying an artwork or creation remotely.

“I see myself continuing on a fabulous journey of self discovery. I am currently working on a series which tries to understand the significance of circles and spirals and orbs. The 'abstraction' which is emerging is quite interesting,” says Suvarna, describing her artistic journey.

“Believe in your heart and follow your dreams,” she advises aspiring artists. “Come and visit the world of art. I promise you it will be a journey of self-discovery,” signs off Suvarna.