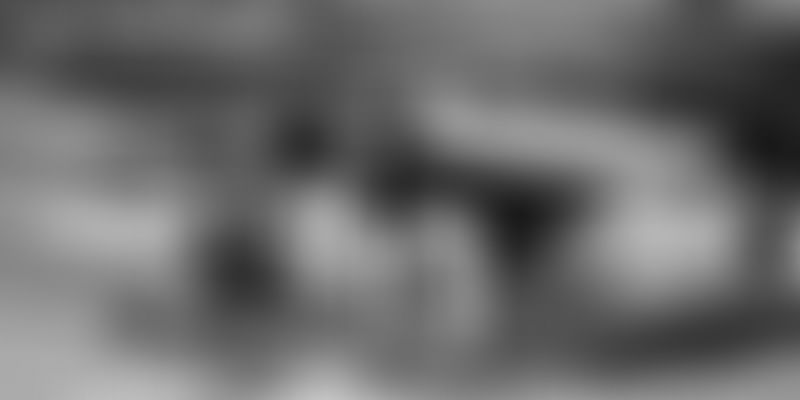 ‘Na gandagi karenge, na karne denge,’ said Narendra Modi during his speech at India Gate on October 2, 2014. Why then are children in Chandigarh slums seen playing with faeces instead of toys?

The Union Territory of Chandigarh comes under 100 percent household toilet coverage, according to Swachh Bharat Mission (Gramin) data. It was declared open defecation free in September 2016.

To determine the effectiveness of the Swachh Bharat Mission (SBM), I visited two colonies in Chandigarh where latrine stalls were installed under this scheme.

A major problem in the SBM is said to be the unwillingness of people in rural areas to use toilets even when they have been provided. This is mainly due to caste prejudices that deem cleaning human waste a responsibility of the lower caste. As a result, people prefer to defecate in the open rather than clean the pits, or get them cleaned.

Contrary to this, in both colonies, it was clear that the problem is not that residents are not using the toilets; it is the usability of the toilets.

According to MK Dhawan, Executive Engineer of Chandigarh’s Municipal Corporation (MC), who deals with installation of toilets in the city, all slums have community toilets. All toilet stalls in slum areas under SBM have ceramic pits and are connected to the city’s sewage system. They are not connected to the water supply and therefore have to be cleaned manually. To facilitate use at night, electric poles have been installed next to these stalls.

No data is available regarding the total number of toilets installed in Chandigarh, Dhawan confirms.

According to Dhawan, the toilets are temporary and will be demolished once dwellers are rehabilitated, which is a separate issue.

To maintain these toilets, the MC has appointed residents from within the colonies. He says payments are made online.

When asked if these people have access to bank accounts, he adds that in those cases one person, usually a woman, is made the leader of the worker’s group, and distributes money to the workers.

“We do this for women’s empowerment,” Dhawan adds.

The Shahpur Colony is in Sector 38 West and the blue latrine booths are visible from far. Shahpur Colony has two problems - shortage of water supply and the condition of the latrines. There are 60 stalls that are difficult to use; 40 of them were installed under the SBM in October 2016.

In the colony, a petite woman is washing clothes in a small circular concrete area. Gomti, 29 year old, migrated from Uttar Pradesh eight years ago. “One has to hold their breath and go [to the toilet],” she says.

Meanwhile, a child was playing with faeces he had picked up from the ground, threatening to throw it at other children, playfully running away from him.

To clean the toilets, the MC had appointed Arun Kumar and Vishekha Devi, and promised to pay each of them Rs 9,608 per month.

Arun and Vishekha recount that a man called Harphool (they did not know his full name) instead used to make payments, on the 20th of every month, contrary to Dhawan’s claims.

All went well till February when the payments stopped coming. Arun and his son’s efforts to contact Harphool went in vain.

Arun now cleans the toilets occasionally. Each house pays Rs 50, which amounts to roughly Rs 6,000, but the residents don’t want to pay and have not been doing so for a few months now.

A distressed Arun says, “If he [Harphool] doesn’t give us the payment, tell him to remove the stalls!”

Dhawan, however, has a different take.

“The MC remains in constant touch with residents. We have encouraged them to use the toilets and now it’s okay. They know it is a safe and good practice.”

When asked about the problem faced by Arun, Vishekha and the residents, he says: “These are small issues but everybody is paid sooner or later.” He adds that the MC pays Rs 15,000 for every 20 stands, contradicting information given by Arun.

Substantiating Arun’s claims is the existing problem of delayed payments, which is hardly new.

Shahpur Colony is also plagued by a shortage of water supply.

Gomti points to a piece of clothing infested with small insects; it could not be properly cleaned due to paucity of water.

Water is available in the morning from around 6 am to 9 am and in the evening from 5.30 pm to 8.30 pm. The residents have attached a pipe to the latrine’s water supply pipe, and use the water for drinking and cooking.

Bhaskar Colony’s milieu is much like how one would expect a slum to be - crowded, filthy and with a strong stench. The area has kacha and pakka houses. Land for construction of pakka houses was given to a few residents by the government almost randomly, back in 2008. No rehabilitation has been carried out since.

The colony has 20 independent latrine stalls each for men and women, all found in unhygienic conditions. The pits were filled with faeces up to their taking capacities, and infested with rats.

Bhaskar Colony residents also have the option to use the Sulabh Shauchalya latrines, for Rs 2 per visit. There are 12 of these independent stalls; these were relatively clean. A lady sitting on a charpai outside the toilets was seen collecting money from the users. According to her, the Sulabh Shauchalya averages about 100 visits a day.

None of the residents with kachha houses have a latrine at home; they have dug temporary pits to bathe within the compound of their house.

Laxmi, 48 was washing utensils on the pavement and was eager to talk about the condition of the area.

She says the SBM toilets were installed last year and used to be clean initially. However, their state is bad now. Most residents use the SBM toilets since they don’t want to pay to use the cleaner alternative of Sulabh. The colony has problems with cleanliness, a lot of children fall ill due to mosquito-borne diseases such as malaria and dengue, she says. Laxmi contracted malaria too, was ill for 3-4 months and stopped working thereafter.

A teenager living in the area, Sunny, 14, says, “Water is not easy to procure and there is no proper facility for bathing. Children fall ill frequently.”

While exiting the slum, another woman was seen painting her door. Unable to speak properly due to an accident she met with during her childhood, she has been staying in the slum for nine years. She points to the bathing space in her house – it’s built on the pavement with nothing but a curtain to protect the user’s modesty.

Clearly, a lot needs to be done.

In his speech, Modi had said: “I am thankful to my friends from the media who, since the past few days have been spreading and conveying the word.”

But when will the words be translated into action on the ground?