The Synup story: from cash-flow trouble to raising $6M to fund expansion 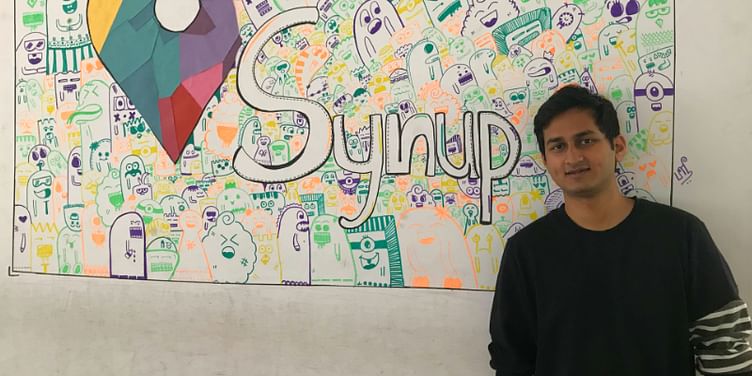 The Synup story is as relatable as can be – and yet, it is remarkable in its own right. And their idiosyncratic founder and CEO might have something – or everything – to do with that.

Earlier this week, Synup raised their Series A, a funding round which saw continued support from an old investor. The company now caters to a 50,000-strong client base.

Hiding behind these numbers are plot twists that possibly every entrepreneur has weathered –from scaling ambitions with zero marketing dollars, or flat-lining cash flows. However, the judgment calls Ashwin Ramesh took at these crucial junctures, are what make Synup’s story a worthy blueprint for others in the SaaS game.

Syning up for the challenge

Ashwin Ramesh, now 27, dropped out of college and since he never fancied being a deskie, he was always ready to assume the mantle of entrepreneurship. Before Synup, he ran an online marketing consulting company. The idea for Synup came from the hitches he faced while scaling it.

“The biggest challenge was that in the modern era, local businesses need to ensure that their location data is accurate everywhere; it's a massive challenge to manage profiles across sites like Google, Yelp, Bing, Apple etc. There was no consistent way to do this – so Synup decided to solve this problem by providing a single interface to manage location data, gather customer insights via reviews and also use analytics to understand what's working and what's not,” Ashwin explains.

Incorporated in February 2014, Synup is a SaaS-based offering, with their technology stack on Ruby On Rails and Postgres. They offer three major services - location data management, reputation management and location analytics.

For a business to be found on the internet, they need to first have a profile.

“Once a customer adds their location data into our dashboard, we instantly populate that profile across 50 of the most important local search destinations and directories,” he explains.

From then on, customers can update their information on demand, and Synup automatically updates their profiles across the sites.

But, it's not enough for a business to have a profile; they must take into account what customers are saying about them, too. Every time a business receives a review, a check-in, a photo or mention, Synup sends out an instant notification to the business owner so they can sense the pulse of their customers. Furthermore, they help local businesses improve their star ratings by surveying their end customers and not only encouraging them to leave a good review, but also intervening with damage control when they are unhappy, so that they don't leave a bad review – for it is estimated that a 1-star rating loss could impact business by up to 3 percent!

Finally, Synup tells their customers how they are ranked in comparison to their competition, how many profile views they are receiving, how many calls they are getting and how many people are being driven to their store from their profile.

The size of the opportunity

Synup charges a monthly fee based on the physical location of the business. For example, a restaurant chain with 30 physical locations would pay $30 per location per month – amounting to $900. In that regard, their target market is all local businesses – from restaurants and salons to plumbers.

Geographically, however, they have mainly been catering to the United States and Canada, and hope to expand to other geographies towards the end of this year.

“We have always used online marketing as our primary vehicle to drive traction. After all, we need to be able to eat our own dogfood,” Ashwin reveals. In fact, in a tell-all post on Medium titled ‘Startup Marketing On A $0 Budget,’ Ashwin revealed all his hacks to market your startup on a shoestring budget with subtlety and class – including tips like optimising Quora, genuinely taking interest in offering up advice in online communities, tracking relevant blog posts, engaging with the readers, and leveraging Google+ to leave no stone unturned.

So far, they have served over 50,000 local businesses and crossed over $1 million in ARR within 9 months of launching the product.

However, behind these promising numbers are horror stories of not knowing exactly where the runway ends. In early 2016, they were rapidly running out of money, and had about six months of runway left.

“As the CEO, the first step was taking responsibility. I sat down with the team and told them that I'd stop shaving and taking a salary until we became cash-flow positive again. We had various offers for external funding but it was a trap I did not want to fall into, especially when we were so close to becoming cash-flow positive. No pain, no gain,” he recounts.

Ashwin’s advice to fellow entrepreneurs is to try and get profitable. “Even if you don’t have to or need to - it’s one of the best feelings in the world. Do it as an exercise in restraint and a test of your grit,” he says.

Synup raised seed funding at a more opportune time, in June 2014, from Prime Venture Partners and formally launched their SaaS offerings in November 2015. They eventually turned cash-flow positive by March 2016.

The most recent development in Synup’s journey is cinching their Series A from Vertex Ventures and Prime, earlier this week.

“Our primarily challenge with VCs was that it was very hard for them to understand our business. VCs in India only get enterprise SaaS, India SaaS or SMB-focused SaaS. Local is a space that they do not understand since there aren't that many players. Multiple VCs told us that we could never get beyond a million dollars in revenue, or that this is not a fundable business opportunity,” he recalls.

However, the continued conviction that Prime Venture partners showed in them, coupled with their numbers, came through for the startup that is being touted as being amongst the first wave of global SaaS companies to come out of India, by Prime. Shripati Acharya, Managing Partner, Prime Venture Partners, says, “When we initially invested, Synup was just starting their journey. However, the clarity of vision from Ashwin in understanding both the opportunity and the execution left little doubt in our minds that we wanted to back Synup.”

Ben Mathias, Managing Partner at Vertex Ventures, added, “Their strong early customer traction is a testament to the efficacy of their approach to address this massive market opportunity. We have been impressed with the experience of their team, the thoughtful design of their product, and look forward to helping scale this company.”

Bootstrapped major Chennai-based Zoho is one of the prominent startups in the sphere, swimming among the sharks like Oracle, Microsoft and SAP.

While Ashwin claims not to have any direct competitors in India, their largest competitor abroad, based in New York City, is Yext, which recently went public with a market cap of $1.2 billion.

“Our primary differentiator is the depth of our offering - we have the most comprehensive, location marketing suite in the market,” Ashwin states, signing off.