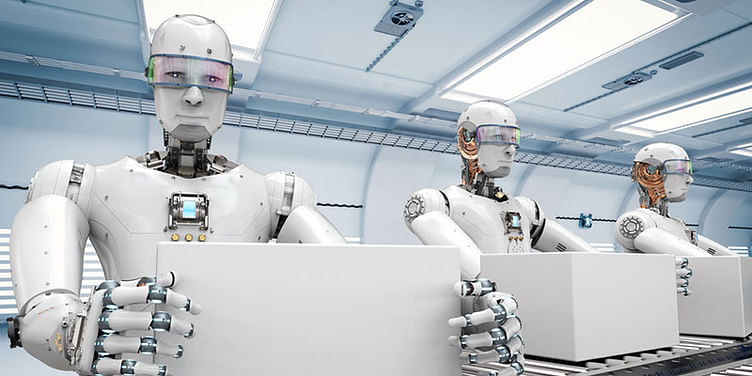 As Larry Ellison, Chairman of Oracle, puts it, “AI does not mean the loss of jobs; people will be reskilled to do better work rather than patch software.” He is absolutely right because engineers will be retrained to program software that can take decisions rather than make incremental corrections to patchy software.

In 1969, when the first computer was being introduced in the Life Insurance Corporation of India, there were nationwide protests. History tells us that there are new jobs — even when technology upgradation happens — provided an ecosystem exists to train people to stay relevant in the companies. Unfortunately, there also exists the fear of job losses and the challenge for corporate is to manage this fear subtly. It is true that self learning software makes the need for massive amount of engineers — to deploy an application — a thing of the past. So what should people do?

The answer is as simple as that — one must constantly learn to upgrade themselves regardless of their age and position in the system. “If you are a startup today, you build to solve globally. If you are in the leadership position in an organisation, then you have to guide people in understanding global trends,” says Sanket Atal, Group VP at Oracle.

Here are the industries that need reskilling immediately:

BPOs: The BPO industry is part of the $160 billion IT industry. People talk to people if they have an important query. However, you may find a robotic voice already telling you that there is really no need to talk to a human unless you cannot find your answers.

So, most of the queries are answered by programmed bots. With advances being made in Robotic Process Automation (RPA) where bots are trained to answer questions, the need for humans to answer customers is reducing rapidly. The future is clearly in bots tracking the life cycle of the customer, and organisations are using them to cut costs. So what should the 1 million BPO employees do? The immediate need in BPOs is to move into analytics services or model customer profiles for marketing campaigns. Data analytics is creative and throws in a lot of patterns that require people to train machines.

The only question being if people can be retrained fast. Now the business opportunity is there for the taking. “There is a need for data experts to work with engineers to create a self-learning software that can serve the consumers better,” says Vasudev Bhandarkar, CEO of ScoreData. He adds that the age of talking to the customer, to close queries, is over unless organisations figure out a way to handle high-value customers with highly trained individuals. Organisations can either work with Jigsaw Academy, Simplilearn, Degreed, or Edureka — among several others — to reskill their employees, or individuals might have to reskill themselves.

In retail, AI can be used to make predictions about customer behaviour across retailing channels including e-commerce. Consumers can be induced to buy items with intelligent sales promotions as the machine can crunch volumes of data and predict patterns of purchase.

The systems can help retailers figure out inventory, supply chain, and store planning. “It is only going to make retailing powerful and will put people at the centre of interaction with the customer,” says Vikas Lachhwani, Co-founder of MCaffeine, a personal care brand.

The machine can guide the store associate at every step to make instant offers. The Maya AI platform built by Manthan can already tell a store manager about the highest selling products and what the customers mixed and matched on that day’s purchase.

The organised retailing industry is a $65 billion in size, and only three percent is spent on technology upgradation where AI can play a role. There is still a long way to go for the store associate to be connected 360 degrees with technology. So expect bad customer service to continue in majority of the stores.

Manufacturing: Robotics has already made a huge impact on bringing in efficiencies like no other technology across the world. A bunch of 100 robots can assemble ten times more cars than a workforce of 2,000 people. In India too these robots have created economies of scale. The robot is a one-time investment for twenty years, and apart from software upgrades, it has no costs. Today, 50 percent of large-scale manufacturing has already moved towards robotics where AI platforms have been managing plant production schedules. Previously — around 30 years ago — a foreman used to manage time and execution. Today the factory can be just four walls and a roof where there is no need even for lighting and the floor can be provisioned by robots controlled by AI. “Clearly the entire factory, say of the size of half a million square feet, can be managed by two or three people with the help of robots,” says Vijay Ratnaparkhe, MD of Robert Bosch Engineering India Limited. He adds that these people are experts who can fix robots that are breaking down.

How do people reskill themselves? The organisations will push talent towards small and medium enterprises which are semi-automated. SMBs are clearly going to lap up the talent. But the question is if they can afford these skilled people in an economy that works on thin margins. Now YourStory predicts Indian manufacturing will keep employing people just to keep the rate of jobs creation intact and avoid social chaos. However, at some point, the answers must be found to make people productive. “It is perhaps the greatest problem for all economies, yet AI and people can coexist because it creates efficiencies in providing predictive and prescriptive services, which humans can use to serve customers better,” says Soumitra Bhattacharya, MD of Bosch India.

Manufacturing is a $400 billion market opportunity and is the second largest employer after agriculture.

IT services: The opportunity to reinvent IT services has already gained traction. Today, all companies are taking the platform approach to build AI services. Infosys has been the most vocal among the lot regarding the use software to make revenues rather than just sell integration services. Now, the conundrum here is whether the era of employing engineers and training them in basic computer languages for application development and maintenance is over. Of course it is over. One only has to see the hiring patterns in organisations and the number of people in the bench. Every quarter, you see IT service companies reducing their guidance numbers.

Co-founder of Zoho Corp, Sridhar Vembu, is analysing technologies that can impact his organisation and his employees. He leaves no stone unturned when it comes to upskilling employees and is betting on technical languages that work for Zoho’s applications. Sridhar spends a lot of time with his engineers and almost 400-odd engineers have moved from the coding server to building applications on Android. At Zoho, senior engineers are constantly relearning static languages (Scala and Java), and are even playing with dynamic languages (JavaScript, ActionScript, Ruby on Rails). Sridhar says:

“We can build a global organisation the Indian way. Unfortunately, all organisations use the western concept of hiring and firing, and focus on boosting shareholder returns. It is the problem of the leaders who don’t understand the impact they have on employees fired; after all, they just follow what they were told.”

He adds that it is the responsibility of the leaders to ensure that employees are up to date with new technologies.

“Even if people are talking about AI, you need human capital to train these machines in understanding data. I believe in contextual learning, and people in Zoho are learning from different teams at any given point of time,” says Sridhar.

So IT services companies have been training people in design thinking, machine learning, and AI. All this training is part of their cloud service offering and is yet to even constitute five percent of their revenues. So AI and ML will hit the IT services industry when global corporations demand efficient software which makes use of less people to provision and patch services. This transformation has already begun and can affect the $160 billion IT services industry which employs close to 5 million people in the country.

So we can safely say that reskilling should be your immediate strategy to move up the value chain. But it is easier said than done.

In July, the Vodafone-Idea merger was approved by the Competition Commission of India (CCI). The mega deal will make the shareholders of both companies become part of the largest telecom company in India, and reward them in the future. It will also create a situation that can quickly escalate into a nightmare.

As many as 6,000 senior-level leaders will have overlapping roles in the new entity. Industry sources say that at least 50 percent of these will have to be let go and will be “not employable”. These individuals, who have put in at least 20 years of work in various roles within the organisation, have not been trained to keep pace with the digital era. But turning unemployable at the age of 45 is scary.

Now, all we can say is AI is not doomsday. It means your jobs will be realigned. Reskill yourself and find future projects so that you may not fall in the chaos that ensues when organisations rediscover themselves to changing technology.