How bio-sand filters are revolutionising water purification in Indian villages 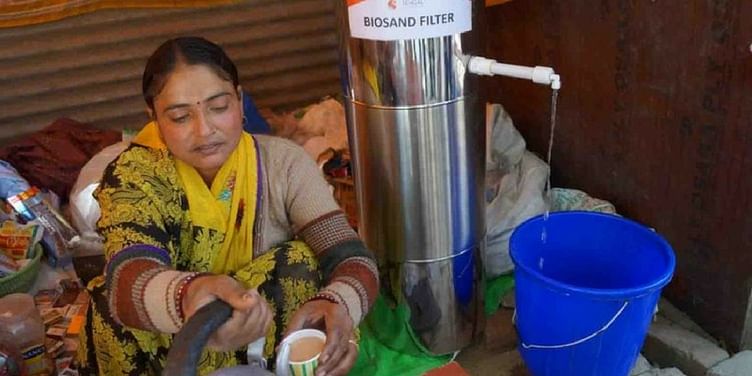 Urmila Devi lives in Chaitabazaar village, barely five km from the eastern bank of the Burhi Gandak river. The village is located in the flood-prone area of East Champaran in north Bihar, and drinking water quality in the area is poor. Recurrent floods only make it worse.

Much of the Chaitabazaar village floods during the monsoons every year, and this year has been the worse since 2007. Though the central ground water board says the district’s groundwater is suitable for drinking, it admits there are certain areas where there are iron and arsenic contamination.

The water is mildly alkaline, and rich in iron in Urmila’s village. “The water quality of my household’s 110-feet deep hand pump is poor and poses problems all the time. The water is dark because of high levels of iron, and has a peculiar stench because of bacteriological contamination, which leads to illnesses every now and then,” says 40-year-old Urmila.

“I did not get safe water at my doorstep and had to perform the backbreaking task of fetching water from afar. From the wee hours of the morning till afternoon, I was engaged in collecting water and could barely attend to my children,” she adds.

In north Bihar, the overflowing river water poses health problems. Once flood waters recede, communicable diseases rise. “Many people die due to waterborne diseases every year, especially flood victims residing in the relief camps. The government’s response to rushing doctors and medical equipment to flood-affected districts to ward off disease outbreaks helps reduce casualties, yet scores of flood victims die of diarrhoea and other illnesses.

The relief work and health camps stop as the flood water recedes, but people continue to fall sick due to stagnant waters, which not just breed mosquitoes, but also pollute groundwater. All kinds of illnesses are prevalent, with diarrhoea being the most common, says Surendra Prasad Gupta of Ajna village in the nearby district of Samastipur.

Biosand filter to the rescue

Gurugram-based NGO, Sehgal Foundation, in response to the poor water quality, came up with a biosand filter called JalKalp.

“JalKalp is a low-cost water treatment solution to the problem. A biosand filter that filters water through layers of sand, it offers increased filtration rate and better portability than the conventional models of filters. Besides its appearance, this steel filter adds to the strength, reliability, and durability, making it a reliable source for clean drinking water,” says Lalit Mohan Sharma, director, Adaptive Technologies, Sehgal Foundation, Gurugram.

“It was by chance that I attended a village meeting of farmers conducted by Sehgal Foundation. Towards the end of the meeting, they informed us about the newly-developed biosand water filtration system called JalKalp. I thought that there is a good chance that this may work and ordered one for my household. The device was installed the very next day and has been working well so far,” says Urmila. “I found that the solution is self-sustainable and does not require any operational, replacement or maintenance cost after installation,”.

Like most mechanical filters, in JalKalp too, large contaminants are filtered mechanically, while other contaminants stick to the surface of the filter media. Small pieces of a thin copper sheet with a total surface area of six sq cm are inserted in the drainage layer in order to remove coliform. JalKalp performs better concrete counterparts and has a wider opportunity for application and adoption in different geographical conditions.

Dharmendra Rai, a teacher from Sedukha village in Samastipur district says his wife had been suffering from a thyroid disorder and was being treated at Samastipur and Darbhanga. “When Vishnu from Sehgal Foundation approached me for installing Jalkalp at my home, I agreed. My wife was gradually weaned from thyroid medication which she was taking for two years. We realised that drinking pure filtered water is important. Otherwise, the fluoride and chlorine in water can block the iodine receptors in the thyroid,” says Dharmendra.

Umesh Mahato of Sedukha village had been on medication for a gastrointestinal problem that he had been suffering since eight years. He shifted his drinking water source from the 60-ft hand pump to a 250-ft borewell when he came to know that the former was contaminated. The borewell water is slightly better, and after filtration through JalKalp, is safe to drink.

“The development of this 4.5 kg filter, offering increased filtration rate and better portability than concrete models was preceded by a study of the shortcomings of conventional biosand filters and we have tried to overcome this. It is effective against E.coli, total coliforms, turbidity, and iron contamination. The filter integrates the germicidal properties of copper with conventional filtration,” says Lalit.

JalKalp can be operated without electricity which is a bonus considering the electricity supply in many villages in Bihar is erratic.

Water quality tests have demonstrated JalKalp’s performance and the organisation is looking to collaborate with entrepreneurs who can adopt a market-based approach to the demand for safe water and sell affordable household filters. This can go a long way in providing safe water to local areas.

Disclaimer: The views expressed by the author are his own and do not necessarily reflect that of YourStory’s.