Over 30 years, this man is making the lives of cancer patients easier 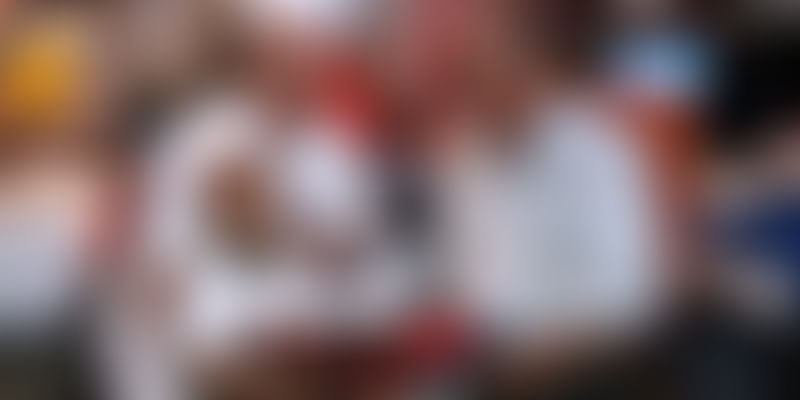 All alone in a big city battling a life-threatening disease with no finances - those who had no one and nothing, had Harakchand Savla.

Harakchand walked five kilometres one way, braving the chill of the morning and the wrath of the afternoon sun, in order to save his bus money and instead, give it to his friend for his school fee so that he wouldn’t have to drop out. Surprisingly, he saw that it made him as happy as the friend he helped out.

Just like that, the 11-year-old had found the simple yet all-encompassing commandment of community living - if you possess an excess of something that another direly needs, give.

Today, when he garners Rs 2-3 crore for the shelter of cancer patients, their families, and the under-privileged -- the underlying principle has remained the same -- when the haves share a little with the have-nots -- happiness, infectious as it is, only multiplies.

Fifty-nine-year-old Harakchand Savla was raised in the area around Mumbai’s JJ hospital, and started out to help others when he was in the seventh standard, by putting his friend through school for three years.

The young man had a fresh set of eyes for the world, and he wanted to simplify the concept of community service. But the words of a gentleman he encountered after his tenth standard exams, changed his life forever. “The society feeds us, clothes and nurtures us, and we must repay that debt by passing on the favour,” he told the young Harakchand.

Choosing not to go to college, he gathered some friends and started “Lower Parel Mitra Mandal,” a small outfit that would perform small services to the community like clean-up drives, a collection of donation for various causes, etc, which they sustained for about five years. In the course of their work, they became immensely close to a girl from one of the areas they served, so much so that Harakchand considered her a sister.

It was thus, a bleak day in their lives when they discovered that the girl’s mother had cancer. Harakchand helped her in admitting her mother to Sion Hospital unaware of the fact that the Tata Hospital offered subsidised treatment. “I was full of guilt when I made this error, but my sister told me that the family was prepared to take their mother back to their village where she could live out her days, but on my suggestion, they brought her to the hospital instead and she was cured. They said, “to us, you are God.” These words stayed with me - I realised it took so little to become ‘God’ in someone’s eyes. This was my inspiration. I left everything else and focused my energies on service, especially the cancer-stricken and their loved ones,” Harakchand recalls.

The beginning of beautiful journey

At that point, he ran a small hotel that was doing fairly well - which he decided to rent out and used all the money raised towards community service. “I would simply go to the hospital and spend time with patients who were alone and had no one around - because a lot of them came from outside Mumbai for treatment, and couldn’t afford the expenditure of having a family member with them. I would help them with their errands, collecting reports, sending their relatives letters, etc,” he recalls.

Once a patient’s relative fell seriously ill. Harakchand took him to his family doctor and they discovered that the man had been living on vada pav (a simple Maharashtrian snack consisting of a potato patty placed between a sliced bun) since he had arrived because he could not afford anything else. “The doctor told me that this person was ruining his own health to take care of someone else’s,” Harakchand recounts.

The very next day, on an impulse he started packing food for 10-15 people from home. This simple act of kindness is what has flourished into the mammoth Jeevan Jyot Cancer Relief and Care Trust that operates on a Rs 2-3 crore budget.

He then formalised this activity by setting up camp on the pavement right opposite the Tata Cancer Hospital’s Kondaji Building, where he would distribute not only basic food but also medicines and other articles of utility. He even conducted a newspapers and clothes collection drive to raise funds through which has collected Rs 40 lakh. “For 12 years, I used my own savings and pocket money, but since the number of people in need was rising sharply while the size of my pocket remained the same, I decided to establish a formal trust,” he says.

By then, tales of his good work had already spread far and wide, and on the power of donations made by well-wishers, Harakchand established a mega-kitchen that today, feeds over 700 relatives of cancer patients, as well as patients who have more severe forms of cancer and cannot even digest hospital food. The food is simple, says Harakchand, yet wholesome and balanced - consisting of roti, dal, vegetables and rice. For people with special needs due to health problems, the kitchen also has provisions for making turmeric milk or food with minimal or no salt. While the inmates of Tata Hospital visit the area attached to the kitchen for their meals, massive packages are sent over to people at JJ Hospital and Cama Hospital.

Today, it has 60 activities running in parallel - of which 20 are cancer-related, and the remaining are general, surrounding organ donation, animal welfare, blood donation, etc. An ongoing initiative is creating a bank of unexpired, leftover medicines from former cancer patients for those still undergoing treatment.

A toy bank has also been created for children suffering from cancer. Picnics and camps are also arranged for them. “I have derived inspiration from various incidents - like a man being unable to donate blood to his son because he was past the legal age inspired me to start blood donation camps regularly in Mumbai. Whenever I spot a gap or a problem that resonates with me, I try to alleviate it through the platform I have created,” he says.

His activities now span three cities, namely Mumbai, Kolkata, and Jalgaon - and the organisation runs on a colossal Rs 2.5-3 crore budget. In fact, the cost incurred on the food alone every day is roughly Rs 12000. “Funding is a challenge. But we have one funda, we only conduct campaigns depending on the funding at our disposal. We never go out and ask,” he states. Harakchand felicitates all benefactors in a local Jain journal and hopes more people will emulate them. Harakchand, in turn, was recognized by Mumbai-based Startup Cheep for their Diwali contest lauding local heroes.

"Our visit to Mr. Harakchand's Ashram made us realize the magnitude of his work.

He runs 60 different social services including cancer patient's well-being, medicines at cheaper rates, ashram facility, an old age home and many more, and just wants people to be made aware about the availability of these services," says Dr Diwan Rahul Nanda, Founder and Chairman at Cheep.

Now in its 32nd year, the trust has 12 offices, an army of 150 volunteers and has served millions. “You do not need to run a trust to change lives - you can start right away. People who need help are all around you - all you have to do is extend a helping hand,” he says, signing off.