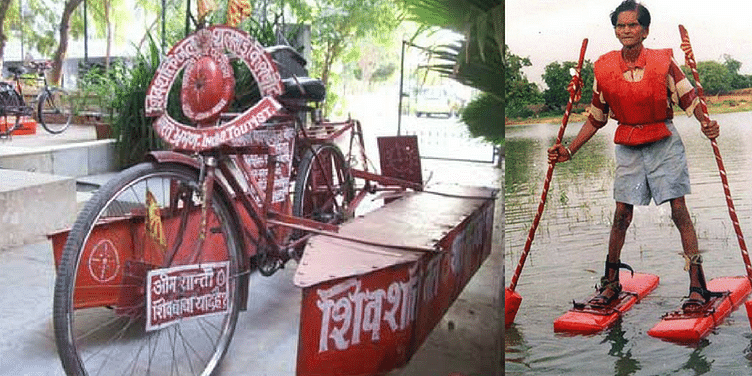 When Dwarka Prasad Chaurasia invented shoes made from thermocol, little did he know that his invention would still be in use many years later. Hailing from Gaughat Mohalla, Allahabad, he was born in a farming family in 1932. An ardent traveller, he planned a solo cycling trip covering most of the country in 1972. The trip, which was spread across three years, kickstarted on September 11, 1975, from North India.

When he found himself stranded in Jagadhari, Punjab, due to heavy rains, he had to do something to get around. He then fixed four empty cans of ghee to his bicycle at a pond about two km away. After several permutations and combinations for three long months, he was ready with a prototype for an amphibious cycle.

On his travels to places like Mirzapur, Kanpur, Kanauj, Delhi, and Ajmer, he attracted huge throngs of people fascinated by his creation. Encouraged, he then decided to try his hand at making amphibious shoes from thermocol, which he had heard was a material that could float. In 1978, he came up with the first prototype of the water shoes, which were five feet long and 4.5 inches wide. According to a National Innovation Foundation report, after several trials, the shoes, made from two floats of thermocol bonded to a rexine sheet, were three feet long, 10 inches wide, and eight inches thick. The unit is attached to metal straps, and the shoes are tied together. For balance, one needs to use a pair of oars.

Dwarka Prasad's innovation has gained popularity in India and abroad. His first demonstration was held at the Boat Club in Delhi, said a report by India Today.

In 2007, he won the fourth National Grassroots Innovation Award.