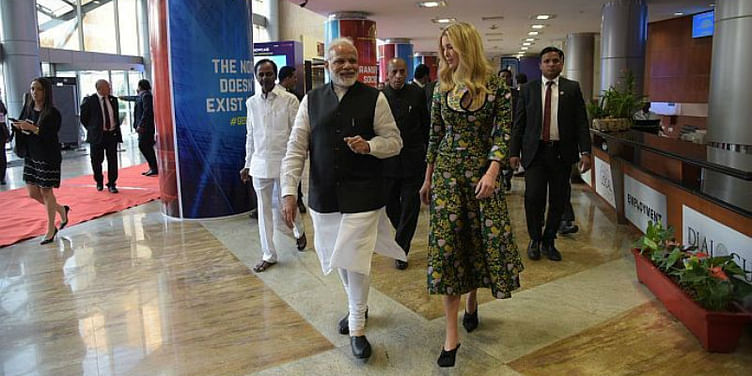 Amid the performances and welcome speeches at GES, five startups had the opportunity to interact with Prime Minister Narendra Modi and Adviser to the US President, Ivanka Trump.

It’s 6 am on November 28, and there are 16 hoardings and boards waiting for us at Hyderabad airport - all welcoming us to the eighth edition of Global Entrepreneurship Summit (GES).

The hoarding saga doesn't seem to stop. Almost all of Hyderabad has hoardings welcoming Ivanka Trump, Adviser to the President of the United States.

At the Hyderabad International Convention Centre (HICC), an estimated 1,500 entrepreneurs and investors go through “airport-level” security checks for the summit, co-hosted by the Indian and the US governments.

Approximately one-third of the entrepreneurs are from the US , one-third were from India, while the remaining one-third are from other countries around the globe.

A key focus this year is the theme – “Women first, prosperity for all.”

Women represent 52.5 percent of entrepreneurs, investors and ecosystem supporters at GES 2017. This is the first time women have been the majority of participants at a GES.

However, prior to the inaugural, Narendra Modi and Ivanka Trump took time off to visit five shortlisted startups. While the delegation couldn’t visit all five startups, they were an important part of the day’s session.

The startups were selected and chosen following guidelines of Niti Aayog and Startup India. These five startups are believed to have been chosen on the basis their innovations and the overarching help they would provide to the country.

Here’s a closer look at the five startups:

In May 2015, the startup raised $12 million (Rs 75.33 crore) in funding from Tiger Global for the development, testing, production and launch of Ather’s first smart electric two-wheeler – the Ather S340. In 2014, Flipkart Founders Sachin and Binny Bansal had extended funding of $1 million to the startup.

The Ather S340 is a connected vehicle powered by a lithium-ion battery pack. It features a digital touchscreen dashboard, a light-weight aluminium chassis, and can reach speeds of 75 km per hour. The smart dashboard in the vehicle will enable users to create personalised profiles, choose riding modes and set other ride preferences.

AR Rahman, in fact, launched the first version of Ahhaa, which was then a mobile app targeted at achieving inner growth and fulfilment. Ashwin then decided to slightly pivot Ahhaa from a mobile-app only platform to a virtual reality experience.

The goal now is to create “Ahhaa spaces” or VR-powered meditation centres in corporate and educational campuses.

Ashwin explained that while the content has been created based on insights from his journey as a monk, the music for the Ahhaa Space has been specially licensed by AR Rahman.

Over time, the startup aims to create more content as it expands to other categories.

Founded in 2015 by a small group of students from BITS Pilani, Team Hyperloop India is a multi-disciplinary multi-university think-tank comprising over 60 motivated student volunteers in the fields of engineering and business. These students have the long-term goal of reinventing transportation in India.

Their OrcaPod is India’s first and only entry to the SpaceX Hyperloop Pod Design Competition. The system accelerates a passenger or cargo vehicle at airline speeds through a steel tube in near-vacuum using a linear electric motor.

This Pune-based startup was launched by Wing Commander Dr D Lavanian and his daughter Yamini Lavanian Ambupad. As a doctor in the Indian Airforce, Lavanian would invariably help people in rural areas with various healthcare needs and requirements.

“After retiring from the Airforce, the need to continue doing something important for people was what made me create and conceptualise AmbuPod as a rural health platform,” Lavanian says. Working as a unique micro-ambulance and clinic pod, the AmbuPod is a single patient, all-weather setup that can easily seat a medical attendant and a patient.

The AmbuPod, built at a cost of Rs 3.5 lakh, is designed to permit easy transmission and transfer of data. It also has a kit that allows setting up of a clinic for daily OPD services. All the medical equitpment on the AmbuPod can be charged by solar power. The team is now seeking funding to build more such AmbuPods across different regions.

Kaushik Mudda and Navin Jain, Co-founders of Ethereal Machine, graduated from RVCE Bangalore in 2014 as engineers in the field of electronics and communication.

After facing challenges and an estimated 63 rejections, the team was able to break even and do well by bringing about a conjunction between additive and subtractive manufacturing techniques. Over the last year, the startup went into stealth mode to work on a social project- a five-axis 3D printer.

Kaushik shared that they were the first Indian company to recently win the prestigious CES - Best of Innovation Awards alongside tech giants such as Samsung, LG, Nissan and Bang & Olsen. The award was given for inventing the world's first 5-axis additive and subtractive printer.